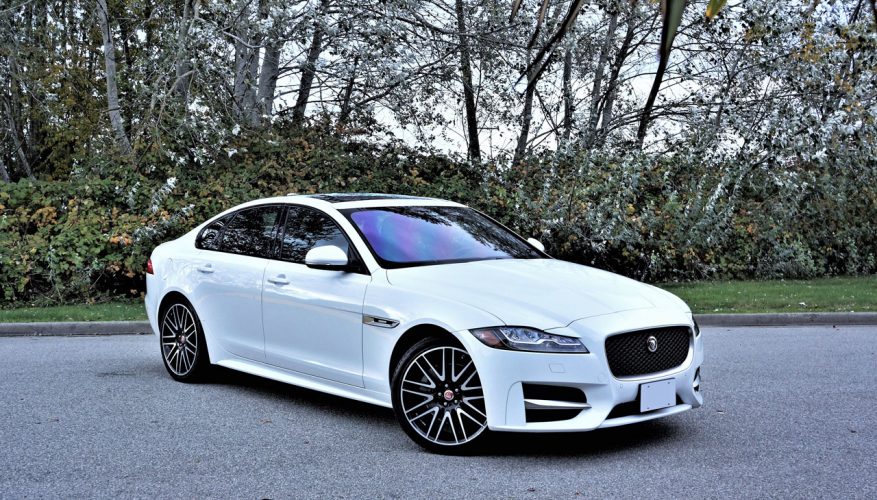 By: Trevor Hofmann
In Fuji White and R-Sport trim the XF ideally defines elegant performance, while its 20d turbo-diesel powertrain adds a practical element too.

The 20d moniker is new for 2017, giving Jaguar an edge in a market with few competitors. Ironically, the Germans pioneered and propagated diesel power for more than a century, yet due to Volkswagen’s emissions scandals, dubbed Dieselgate when revealed in September of 2015, that impacted Audi in the premium sector, news of which eventually shed light on a reported “secret cartel” in the 1990s to collude on diesel emissions, claimed Germany’s Der Spiegel magazine in July of this year, which is said to have included Volkswagen, Audi, BMW, Porsche and Daimler (Mercedes-Benz), the big boys from Deutschland have abandoned the technology en masse and instead embraced all things electric. Full disclosure: after a short hiatus BMW still offers its 328d xDrive and X5 xDrive35d, but that’s it for Teutonic oil burners.

Jaguar is pushing an electric agenda too, its upcoming compact I-Pace five-door crossover making this abundantly clear, but while plug-ins (and hybrids) remain less than one-percent of the global car market while gobbling up immense development resources the British luxury division of Indian parent Tata, along with its sister-brand Land Rover, are doing their best to woo disenfranchised diesel lovers with four-cylinder and V6 oil burners of their own. The latter BMW-engineered Td6 is used solely by the dedicated SUV brands, while the 20d is an in-house designed and built 2.0-litre four-cylinder that’s innovating in a market where its competitors were apparently machinating.

For starters the Ingenium diesel’s compression ratio is a sizeable 15.5-to-1 thanks to having no spark plugs to trigger the combustion process, the 20d instead utilizing heat generated from air compression to ignite inbound fuel. The result is 180 horsepower at 4,000 rpm and a considerable 318 lb-ft of torque between 1,750 and 2,500 rpm, the latter figures key to the mid-size Jag’s zealous performance. The word “eager” comes to mind, because its seemingly black and white 8.4-second jog to 100km/h doesn’t accurately explain its vibrant jump off the line and ever-willing zeal to sprint faster by merely feathering the throttle.

I’m not trying to compare it to the vim and vigor of the XF’s available gasoline-powered 3.0-litre V6 that puts out an even more engaging 340 horsepower and 332 lb-ft of torque in its most modest state of tune and 40 additional horsepower when an “S” gets added to its nameplate, that last model zipping to 100km/h in just 5.3 seconds, nor for that matter the 2018 model’s impressive new Ingenium 2.0-litre gasoline-powered turbo-four that pushes the car to 100km/h in a mere 5.5 seconds thanks to 296 horsepower and 295 lb-ft of torque, but none of these combine their performance with fuel economy equal to 7.8 L/100km in the city, 5.8 on the highway and 6.9 combined.

When not testing the XF’s performance credentials and merely puttering around town doing daily errands I achieved better than the posted limit, my mostly city average resulting in 6.7 L/100km, although my right foot seems to be tied to the wallet in my back pocket which makes for a particularly light touch on the throttle. Either way, the XF 20d is one of few cars I’ve driven that can exceed its claimed fuel economy rating if driven accordingly.

When testing the XF’s performance credentials I was hardly surprised by its near unflappable stability and athletic agility. After all, it rides on the same aluminum-intensive monocoque architecture as the F-Type sports car and all other Jaguar models, which means its lighter in weight than most peers, as well as stiffer in structure. This rigidity allows plenty of suspension travel for a wonderfully compliant ride without hampering handling, a best of both worlds combination that can be left to its own devices in Normal mode, adjusted via Jaguar Drive Control settings to eke yet more efficiency from a tank of fuel in Eco mode, aid traction in slippery conditions via Rain/Ice/Snow mode, or better yet, set to Dynamic sport mode to heighten all its senses.

The XF comes standard with a fully independent double-wishbone front suspension and an integral-link rear setup that can be upgraded with Jaguar Adaptive Dynamics adjustable dampers, these capable of monitoring body movement 100 times per second and wheel/tire movement 500 times per second while simultaneously comparing data with vehicle speed, lateral Gs, yaw, tire grip, and more. It feeds everything through various algorithms and factors in individually chosen Jaguar Drive Control modes before instantaneously adjusting the damper control valves for ideal ride and handling. It’s a superb system that’s well worth the reasonable $1,020 charge.

I should mention that all XF’s use a ZF-sourced, Jaguar-tuned eight-speed automatic gearbox that shifts effortlessly when cruising and snappily when pushed hard, its standard paddle shifters enhancing the latter experience. Like most Jaguars, the pièce de résistance at startup is the rotating shifter that powers up from its otherwise flush position atop the lower console, but after choosing “R”, “D” or “S” any hands-on engagement must be via fingers on paddles.

All-wheel drive is also standard across the XF line, aiding grip no matter the road conditions, while All Surface Progress Control provides a sort of low-speed cruise control in slippery situations. Further handling-enhancing torque vectoring comes via the XF’s ABS-enhanced four-wheel discs, while performance-tuned traction and stability control provide the usual last resort and fortunately very effective failsafe support. Of course, the 255/35ZR Pirelli Cinturato P7s wrapped around big optional 20-inch alloys underneath did their duty and then some, this XF 20d AWD R-Sport a wonder to drive quickly whether tearing up a backcountry road or weaving through inner-city traffic.

This is great value when compared to similarly equipped competitors, and as you might expect the XF holds nothing back on its rivals when measuring interior fit and finish, materials quality, and design. The entire dash top of my tester was contrast-stitched padded leather, while Jaguar finishes everything above the waist with soft-touch premium surfaces. A bit of a disappointment is the hard shell plastic glove box lid, which is substantively dense albeit not as nicely done as those that cover theirs with more pliable synthetics, while each side of the centre console and the lower door panels are made from lesser grade hard composites as well. There’s not much density to the black lacquered trim around the dash and across the doors either, but the textured metal that highlights the area below and across the instrument panel is very nicely done. All in all, the XF’s interior is a mixed bag of perceived quality, better than the XE but not as impressive as XJ. Of course, Jaguar isn’t alone when it comes to such materials issues, the Germans cutting similar corners in their quest for profitability, but at a time when mainstream volume-branded sedans are getting so very good at mimicking premium players, it’s probably smarter for luxury brands to make a special effort to rise above and beyond reproach.

If you can look past these very small and hardly critically important issues, the XF is a superb mid-size sport-luxury sedan that’s as beautiful to look at as it’s entertaining to drive, while when equipped with its ingenious Ingenium four-cylinder turbo-diesel 20d engine it becomes one of the most efficient cars in its class. That it can be had for as little as $60k and gets even more affordable for 2018 is all the more impressive, making the Jaguar XF well worth a closer look when it comes time to trade up from your current ride.
©(Copyright Canadian Auto Press)
Car Shopping Tools