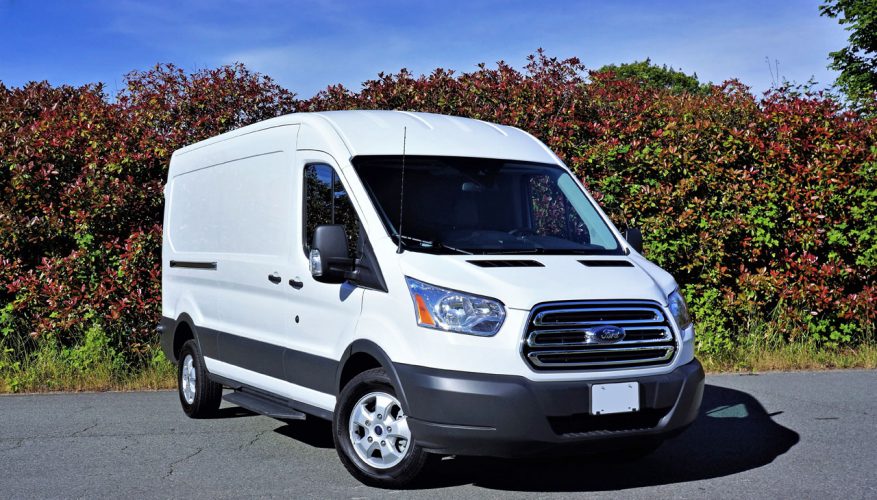 By: Trevor Hofmann
If your business needs a new cargo van, Ford’s full-size Transit is a good place to start your search.

The Transit 350 Diesel Van available for my weeklong test made the just noted term “full-size” seem understated, as it was a bit too big for my garage. I left it sitting on the long patch of gravel in front of my office when not in use, although it’s sheer mass had me worried it would cave the side of an adjacent ditch in, and we’d walk out to find it lying on its side. Fortunately, my concerns weren’t warranted.

It really wasn’t parked for much of its short tenure anyway. As you can likely imagine, I had a number of mobile activities that required such a large, dry space, foreknowledge of such a useful appliance causing a preplanned agenda that could never be fulfilled in just seven days.

The Transit 350 Diesel had no problem accommodating our every wish, mind you. Our tester’s massive passenger side-slider and tall 50/50-hinged rear doors provided access to a cavern of cargo capacity, while its rubberized floor and finished sidewalls meant our various loads wouldn’t scratch any inner paintwork or vice versa.

Ford offers two Transit models and three trims for 2017, the base unit simply dubbed Van due to its cargo hauling focus, whereas the Passenger Wagon XL and XLT trims are ideal for hotel/airport shuttles, sightseeing tour companies, or any other duty that requires comfortable seating for eight to 12 people.

Within these categories there are three different roof heights and another three lengths to consider, the former named Low, Medium and High, and the latter dubbed Regular, Long and Extended. Yes, Ford’s commercial sector doesn’t get fancy with nomenclatures (like we do), but that’s not to say our Long-length, Medium-roofed 2017 Transit 350 Diesel Van wasn’t nicely equipped as far as work vehicles go.

Before delving into all of the Transit’s details, take note that Ford gives its commercial buyers 64 choices when it comes to configuring the 2017 Transit, which is up from 58 last year. Considering 2017 is only the model’s third year of availability, this is a lot of variety that will no doubt keep increasing as its popularity grows. Ford claims the van’s many fleet buyers were influential in the upgrades made since the Transit arrived on the scene, one of which is a new lower-profile centre console that makes stepping directly from the driver’s seat into the rear cargo area easier.

Heatable front seats are now on the options menu too, whether upholstered in leatherette or fabric, while choosing the plusher material allows for available 10-way powered seats as well. What’s more, the stereo is now made up of four speakers instead of just two, with tweeter and woofer included.

On a purely practical point, the Dearborn-based automaker relocated the 2017 Transit’s electrical connections for more convenient access, this change thanks to feedback from upfitters who customize commercial vehicles for fleet buyers.

Powertrain choices, which were carried over from last year, are included in Ford’s list of 64 possible Transit configurations, with the van’s three available engines including a base 275 horsepower 3.7-litre V6 good for 260 lb-ft of torque, a 3.5-litre turbocharged and direct-injected EcoBoost V6 capable of 310 horsepower and 400 lb-ft of torque, and lastly the as-tested 3.2-litre five-cylinder Power Stroke turbo-diesel capable of 185 horsepower and 350 lb-ft of torque. All of that output gets fed to the rear wheels via a proven six-speed automatic transmission, with no four-wheel drive option available (look to the Mercedes-Benz Sprinter or Nissan NV for off-road capability). While we’re talking numbers, the Transit’s maximum payload and tow ratings are 2,077 kilos (4,580 lbs) for the former and 3,402 kg (7,500 lbs) for the latter, while my tester’s body style and engine configuration made it good for a max of 1,542 kg (3,400 lbs) and 3,175 kg (7,000 lbs) respectively.

Being that most Transit buyers will never set foot in one (the majority being fleet buyers for large companies), don’t expect to find a lot of fancy features. Nevertheless, base models won’t cause you to roll your own windows, as the standard features list includes powered front side glass, as well as powered locks with remote access, power-adjustable side mirrors, tilt and telescopic steering, variable intermittent wipers, air conditioning, a backup camera with Trailer Hitch Assist (although the display is very small), an AM/FM stereo with an aux input, vinyl flooring, a fabric front cab headliner, two-way manual front seat adjustment, 16-inch steel wheels, an engine block heater, and more.

I won’t bother going into passenger model features, because that’s not the van we’re dealing with, but suffice to say they’re a bit more plentiful in XL trim and much more so in XLT.

The diesel provides strong acceleration off the line, especially when empty, as was the case for most of my test, whereas its observed fuel economy was even more of an advantage at just over 12.0 L/100km of mostly city driving. Handling is decent enough for this class too, while ride quality is always good in this segment, heavy haulers like these designed to protect potentially fragile freight with compliant suspension systems.

In Cargo Van guise it can house a driver and one passenger up front, and the accommodations are very comfortable. I found the driver’s seat particularly supportive, while visibility is quite good considering it lacked side windows. Big mirrors make the difference, these easily adjusted via a toggle control to the left of the steering wheel. My tester’s rear windows were also helpful, although more for seeing distant traffic than anything close up, the tiny rearview camera doing its best to provide rearward vision in close proximity (a larger display is available, along with Ford’s excellent Sync 3 infotainment system), while I relied more on the rear parking sensors.

As is normal for this class, the rear doors can be unlatched via handy (and very colourful) sliding locks in order to swing around each side for full loading bay access, the doors staying fixed in place out of the way via magnetic connection.

Also handy, the refueling lid is placed right next to the driver’s door for easy access, under which is an even easier capless fuel delivery system for diesel and a blue capped hose for topping up the urea-sourced diesel exhaust fluid (DEF) additive used for emissions reduction. Even better, the lid gets locked behind the driver’s door when locking the van, reducing the chance of fuel theft when unattended. Of course, this last feature is hardly new, having first appeared on the Mercedes-Benz Sprinter, but the Ram ProMaster’s fuel lid can be opened while the driver’s door is closed and is only held in place by a little clip, reducing security.

As you might expect, purchasing a blue-oval badged cargo van is less expensive than opting for a three-pointed star up front, the Transit starting at $34,569 plus freight and fees compared to $41,700 for the Sprinter, although take note that Mercedes offers the smaller Metris from $33,900 if you don’t need quite as much size, but then again Ford still provides its venerable E-Series (a.k.a. Econoline) as a full-size alternative from $31,688, as well as the compact Transit Connect for only $29,199. Back to full-size vans, the Ram ProMaster starts at just $29,695, whereas you can get into a Nissan NV for $34,688. Of course, prices for all of these vans go way up as roofs get raised, bodies get lengthened, engines and suspensions get beefed up and options get added, my tester ringing in at $52,134 as you see it.

The Transit clearly represents good value in the full-size van class, evidenced by its dominating sales. Last year it sold a record 10,204 units in Canada, this more than twice as much as the Sprinter’s 4,677 tally and almost four times as much as the ProMaster’s 2,623 deliveries. Rubbing salt in Ram’s wound, Ford’s old E-Series van sold significantly better with 3,478 units down the road, while GMC and Chevy’s equally dated Savana and Express still did quite well with 7,012 and 4,164 deliveries respectively for a total of 11,176 between them. Ford was still number one when tallying Transit and E-Series sales that equaled a collective 13,682, while Nissan trailed the entire pack with just 515 NV buyers. Ford’s Canadian division may yet have more reason to celebrate as 2017 draws to a close, with Transit sales heading for another record thanks to 9,121 down the road after its first nine months, compared to Q3 2016 when sales had only reached 7,871 units.

I certainly can understand why it’s doing so well. Its value proposition is strong, while Ford offers it in so many permutations there seems to be something for every business. Also important, more Ford dealers are available to sell and service it than its closest competitors. All in all, the Transit appears like a good choice in the full-size commercial van sector. It delivers good rugged build quality, useful features, strong performance, excellent fuel economy, plenty of comfort, and it even looks pretty decent as far as heavy haulers go. Consider it for your fleet.
©(Copyright Canadian Auto Press)
Car Shopping Tools