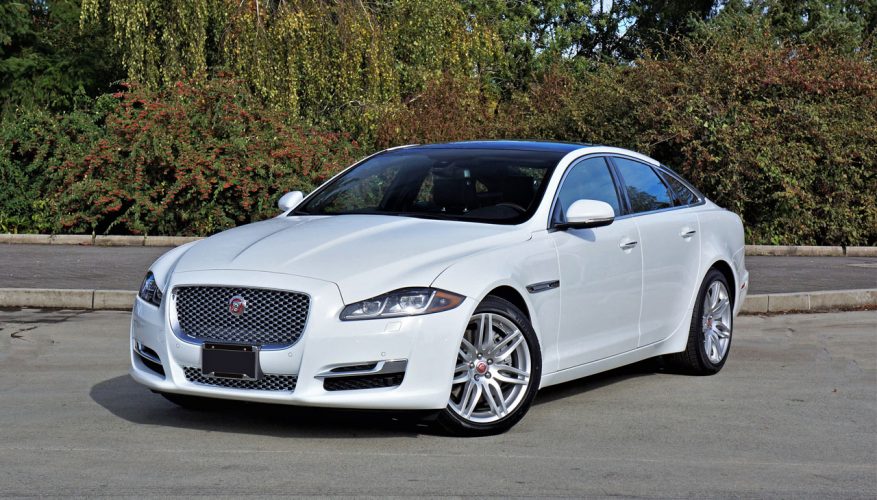 By: Trevor Hofmann
If I were purchasing a full-size luxury sedan the XJ would be top priority, and I’d take it exactly as my most recent tester was optioned.

It looks stately in Fuji White, a name that would probably be more apropos for a Japanese luxury sedan rather than something from Britain. Of course, Cumbria’s Scafell Pike would be an odd moniker for anything car related, and at 978 metres it only gets a dusting of white in mid-winter. The Scottish Highlands is a more likely place to find snowcapped peaks, albeit Ben Nevis and Ben Macdui are even stranger names for car paint. Fuji White it is.

The light colour offsets its black glass roof and black rear pillars perfectly, Jaguar finishing off the rear bumper with a glossy black diffuser-style cap featuring a bit of chrome on top and two polished stainless oval tailpipes at each corner. It’s a stunning look, finished off with gracefully arcing LED taillights in back and sharply dressed full LED headlamps up front.

The latter were added last year, as was a larger front grille, a new front bumper, a reworked lower front fascia, plus those oval tailpipes in back. Depending on trim there’s some lovely bright metal detailing up front, while the equally dazzling front fender vents are carryover. The brilliant set of twinned seven-spoke 19-inch alloys on 245/45 front and 275/40 rear Pirelli P-Zero Nero performance tires are new this year, a sporting yet elegant $540 option that visually underscores the entire car. The XJ looks sensational from front to back, and is easily my favourite full-size sedan in this premium class, at least until moving up into the ultra-premium sector where Bentley wins my vote with the Flying Spur.

Fine company indeed, the same being true for the XJ interior, which in as-tested Portfolio trim comes standard with the most beautiful quilted leather upholstery this side of that more substantive Brit. Mine was in standard Ebony black, with Gloss Figured Ebony (a striped brown and black hardwood) inlays surrounding. Alternatively you can dress up the hides and interior motif with a variety of two-tone colour combinations for no charge, including a Cashew and Truffle (beige and milk chocolate) combination, Ivory and Ebony (an ode to Sir McCartney and Mr. Wonder?), London Tan (more of a camel brown) and Ebony, or Ivory and Mineral (medium-grey), whereas you can swap out the aforementioned Ebony wood with no-cost Gloss Burl Walnut (for a more traditional look), Piano Black lacquer, or opt for $1,640 worth of Carbon Fibre.

Take note, my tester’s heatable wood and leather rimmed steering wheel was a $570 option, but certainly money well spent, while its various metal details, much of which featured knurled edging for jewel-like brilliance as well as easy grip even while wearing winter gloves, come standard.

Of course, any brand can fill a car up with leather, woods, metals and every other assortment of luxury trimmings, all of which can be seen in top-line Fords, Toyotas, Hyundais and Kias as well, the differentiators made by genuine premium brands being the way all of it comes together, Jaguar displaying decades of artisan skill in every inch of the XJ’s cabin, and more importantly how the marque’s rich heritage exudes in design and inherent DNA.

Jaguar’s beginnings go all the way back to 1935 when then S.S. Cars introduced the Jaguar 100 open two-seat sports model, the Swallow Sidecar Company having produced for the motorcycle industry before that. The firm became Jaguar Cars Limited via a simple name change in 1945, and the rest, as they say, is history.

Along with that heritage is modern-day beauty in both design and engineering. Strangely, while the current XJ is going on nine years with only minor updates, its original styling so forward-thinking that it still looks fresh and distinctive to my eyes, it remains one of the only luxury sedans made mostly from lightweight aluminum. In fact, the XJ is the full-size luxury car segment’s lightest entry, a performance and efficiency advantage that increases commensurately when comparing long-wheelbase models.

Ask anyone in motorsport, the main culprit to performance is weight. Therefore, it’s no wonder the XJ feels agile when pushed through fast-paced curves that might unsettle one of its heftier competitors, its mostly riveted aluminum body structure wonderfully rigid too. Pop open the ultra-light hood and some of its aluminum castings become apparent, particularly the strut tower braces, these stiffer than if moulded from pressed steel, while the adaptive air suspension they support is hardly lacking in sophistication, aiding the car’s almost equally balanced front-to-rear weight distribution with superb responsiveness and a blissful ride, even over rough pavement.

There’s environmental reasoning on Jaguar’s side too, the XJ made from 50 percent recycled aluminum that’s more easily recyclable in later years too, while its lighter weight makes for good fuel-efficiency considering the class, its claimed five-cycle rating being 14.0 L/100km city, 9.0 highway and 11.8 combined as-tested.

This would be with the base 3.0-litre supercharged V6, good for 340 horsepower and 332 lb-ft of torque pushed down to all four wheels via a ZF-sourced eight-speed automatic transmission. The latter is a wonderfully sorted gearbox that provides as much luxury sedan smoothness when driver-selectable JaguarDrive Control mode is set to default mode, which engages auto stop/start to shut off the engine when it would otherwise be idling, or winter mode that reduces wheel spin off the line, as it produces short, snappy paddle-actuated shifts when set to its most entertaining Dynamic sport mode.

Its torque vectoring AWD comes into play no matter which mode is chosen, the advanced system utilizing a version of Land Rover’s Terrain Response system, dubbed All Surface Progress Control (ASPC), for overcoming slippery road surfaces. In ideal conditions the XJ Portfolio can charge from standstill to 100km/h in just 6.4 seconds and then on to a top speed of 195 km/h, while I should also mention the supercharged V8 XJR can manage the same feat in only 4.6 seconds before reaching a terminal velocity of 280 km/h thanks to 550 horsepower and 502 lb-ft of torque under hood.

Speaking this way makes the XJ seem like some sort of F-Type inspired super sedan, and while it’s as performance-oriented as luxury four-doors come, with the added enjoyment of inspiring exhaust notes at full throttle, don’t think for a second it’s not fully capable of pampering all occupants with the previously noted luxurious surroundings, plentiful accommodations, serenely quiet ambience, and premium accoutrements.

Of note, the XJ’s fully configurable gauge cluster can now incorporate full infotainment functions within its mid-mounted multi-information display, such as navigation mapping, while the InControl infotainment touchscreen over on the centre stack, which was starting to lag behind rivals when it came to responsiveness, is also improved for 2017. The system’s backend gets a new processor, graphics card, and solid-state hard drive, while the touchscreen allows smartphone and tablet-style swipe and pinch capability along with the usual tap gestures.

I’m not going to give you a rundown on all available options, but you may want to upgrade the audio to a 1,300-watt, 26-speaker Meridian system, while long-wheelbase versions can be had with rear entertainment featuring twin 10.2-inch monitors capable of receiving content streamed from smartphones, tablets, or laptops, plus DVDs of course.

Low sales numbers aren’t something I’d normally celebrate, but with the XJ this results in a level of exclusivity rivaled only by the much poorer selling Audi A8, Genesis G90 and Lexus LS, with 201, 134, 72 and 38 sales respectively over the first three-quarters of 2017. This puts the XJ a bit under half of the 7 Series’ 419 deliveries and five-eights of the S-Class’ 716 unit sales, which is respectable considering the competition. In case you were wondering, Maserati sold 105 Quattroportes over the same nine months, Bentley found 11 Flying Spur clients, and Kia (yes, I’m using Bentley and Kia in the same sentence) managed to pull in six K900 buyers (likely all dealer principals). In truth, none of these luxury sedans are selling in high enough numbers to suffer from overexposure, but you probably won’t see an XJ like this one coming around the corner every day.

That’s something I’d be willing to pay extra for, which along with the heritage mentioned earlier is why its $92k base price seems like such a bargain. Factor in that a base 7 Series will set you back $114k and change, an S-Class will cost a minimum of $106k, and even the LS starts higher at almost $95k, and purchasing an XJ seems like a sensible way to get value without sacrificing quality, performance or prestige.
©(Copyright Canadian Auto Press)
Car Shopping Tools