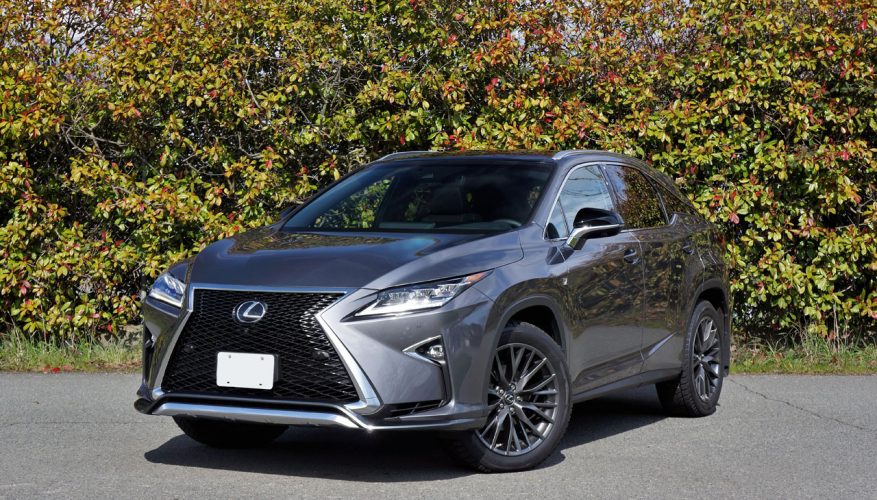 By: Trevor Hofmann
I was about to start this story by saying there has never been a more successful luxury SUV created than the Lexus RX, but after a little research I’m finding out that’s an old, outdated statistic.

The RX, which was the first car-based luxury crossover SUV ever produced, has been amazingly successful here in North America where it remains number one by a long shot, but within Canada alone it’s currently second behind Audi’s smaller albeit almost as accommodating Q5, while globally they both get beaten badly by Buick’s number-one selling Envision that found 123,397 buyers worldwide during the first five months of 2017 (you can thank China for that), as well as Mercedes-Benz’ GLC runner up that sold 117,856 global units over the same period. I don’t have exact numbers for the RX in all the countries it’s sold in because it didn’t make the top 100 vehicles list. So much for starting out this review with a bang.

Of course, with 109,435 total U.S. sales last year and 8,147 here in Canada, plus 75,880 in the States over the first three quarters of 2017 and 6,908 north of the 49th, Lexus and its RX have nothing to be ashamed of. Toyota’s luxury division is really only getting its feet wet in China after breaking through the six-figure threshold for the first time last year with 109,151 total sales brand-wide, while Lexus International reported 677,615 global deliveries in 2016, which is a four-percent improvement over 2015 and its fourth consecutive record year of sales growth. Yup, it’s tough to complain with numbers like these.

It’s difficult to complain about spending a week with Lexus’ latest 2017 RX 350 either. The five-passenger SUV was redesigned for the 2016 model year and still looks very sharp, literally. There isn’t an edgier sport utility available anywhere, now that Lexus’ ultra-wide spindle grille is front and centre, made even bigger and bolder in our tester’s F Sport trim. It flows into a deeply sculpted hood up top, while yet more jagged edges outline each of its triple-stacked LED light cluster elements to each side, these finished off with checkmark LED DRLs at bottom. Even more radically shaped fog lamp bezels are immediately surrounded in chrome before getting finished off with apostrophe-style vertical vents at each corner, all sitting atop razor-thin lower valance detailing.

The RX 350 F Sport’s flanks are almost as chiselled, each fender shaved flat ahead of gloss black, chrome and LED-infused side mirror housings on the beltline and deeply gorged, upward sweeping rocker panel sculpting across the lower doors, the former foreshadowing a glossy black D-pillar depicting a floating roof while the latter visually melds into a chunky rear bumper encasing a sporty rear diffuser and two angularly shaped exhaust ports. By comparison the LED taillights are almost conservative, although a nice fit just the same, while plenty of satin-finish metal brightwork combine with fabulous looking 20-inch dark graphite multi-spoke alloys on 235/55R20 rolling stock. Lexus is hardly a boring brand anymore, and the once conservative RX is now one of the more avant-garde in its class.

The RX 350 F Sport’s cabin is almost as creased and creviced as its origami-folded exterior sheetmetal, but the majority of surfaces not covered in metallic trim or hardwood are soft to the touch. Lexus uses a combination of pliable plastics and padded, stitched leatherette for the dash, upper instrument and door panels, armrests, centre stack, etcetera, and while most surfaces measure up to expected premium levels, more hard plastics are used than with the Germans, per se. You’ll find lower quality composites to the left of the driver, on the lower instrument and door panels, along the lower edges of the centre console, and elsewhere, these corners cut to keep the RX’ base price in the mid-$50k range.

Lexus made a few changes to this 2017 model, including the addition of a new Safety Sense+ suite of advanced driver-assistance systems, now standard. On the list is millimeter-wave radar sensing pre-collision warning, lane departure alert, dynamic cruise control, and auto high beams, all items that were previously bundled in with expensive option groups yet are now standard across the entire model range. This allows for an IIHS Top Safety Pick + rating when optioned out with its top-line triple-beam LED headlights with dynamic auto-leveling and LED cornering lamps.

On the options list is new Intelligent Clearance Sonar, which is collision mitigation for low-speed situations such as parking, while additional active safety options include Vehicle Dynamics Integrated Management (VDIM), a wide-view front, rear and side parking monitor that displays on a stunning 12.3-inch Electro Multi Vision (EMV) screen, plus a head-up display that projects onto the windshield ahead of the driver. As advanced as some of these systems are, Lexus has yet to adapt much in the way of autonomous mitigation systems to the RX 350, such as automatic corrective steering, but its aforementioned pre-collision system is designed to apply emergency auto braking after an initial warning.

The RX 350’s numeric designation actually refers to its 3.5-litre V6 engine, unlike so many other models that have deviated from this sensible practice (the RX 450h hybrid being one), its output a commendable 295 horsepower and 268 lb-ft of torque thanks in part to D4-S fuel injection that combines direct-injection with conventional port-injection in order to best balance performance and efficiency. Aiding both objectives is an eight-speed automatic gearbox, while standard all-wheel drive is par for the course in Canada’s premium SUV sector. Lastly, Lexus’ standard Drive Mode Select adds Sport, Eco and Normal modes to either enhance the driving experience or minimize fuel usage and emissions, the RX 350 good for a claimed 12.2 L/100km city, 9.0 highway and 10.8 combined.

A few minutes behind the wheel of the RX 350 F Sport immediately reminded me how much better this new generation drives than anything in Lexus’ RX history. It moves off the line with much more alacrity, its eight-speed automatic combining with the formidable V6 for a more instantaneous launch and quicker more assertive shifts. The engine even sounds good, as it should. What I mean is I’ve driven mid-engine Lotus’ sports cars with this engine behind their rear firewall, and trust me it can be made to sound exotic and seriously perform. In other words, there’s nothing at all lacking in this well-proven powertrain, even with the engine up front and five seats behind.

I suppose the biggest change when compared to older RX models is the way this newer version takes to corners, the F Sport’s 235/55R20 Bridgestone Blizzaks doing their best impersonation of summer performance tires, at least visually from profile. At first glance they certainly look the part, as do the gorgeous multi-spoke grey-painted 20-inch alloys they encircle, but of course the all-seasons that come standard add significantly more grip at the limit, unless in snow. Still, my RX 350 F Sport tester handled everything thrown at it with aplomb, the new RX feeling more akin to a Mercedes or BMW than previous iterations. It manages fast-paced twisting turns with confidence inspiring ease, even tackling tight twisties with more of a German style flare than any previous generation, while it remains ever-confident at fast highway speeds. All the while the RX never forgets it’s a Lexus, delivering a level of comfort and composure most expect from the Japanese brand, especially in this mid-size class.

As with most vehicles in this class there’s no shortage of available options, the 2017 RX 350 making four packages available. Rather than organize them by price, with the least expensive being the $7,600 Luxury package, followed by the $8,700 F Sport Series 2 package, and either the $13,450 F Sport Series 3 or identically priced Executive package, I thought it best to go over the two F Sport packages and then the two other option groups.

Alternatively the Luxury package forgoes the F Sport styling and performance upgrades yet adds its own 20-inch alloys along with the aforementioned premium LED headlamps and taillights, parking sensors, 12.3-inch EMV, auto air recirculation, and navigation, plus includes LED illuminated aluminum treadplates, a leather-wrapped and wood-trimmed steering wheel rim, 10-way powered front seats with four-way powered lumbar support, premium leather upholstery, and rear side sunshades. Move up to the Executive package and everything just noted in the Luxury package is included, plus all F Sport Series 3 package upgrades. The only negative to the way Lexus Canada has packaged up its top-line RX 350 is an inability to get an F Sport with “the works,” or rather all available options.

So, why should you join the throngs of RX owners instead of going with one of the less popular Europeans, Japanese or domestic-market crossover luxury SUVs? If its edgy styling works for you, interior refinement satisfactory, and performance up to snuff, then the brand’s diehard reliability is certainly a worthy motivator, Lexus once again atop J.D. Power and Associate’s 2017 Vehicle Dependability Study, albeit tied with Porsche this year, although the top ranked “Midsize Premium SUV” is this very RX, the Porsche Cayenne coming in third, split by Lexus’ own seven-passenger GX. This rock solid reputation aids resale values too, with the Canadian Black Book’s 2017 Best Retained Value Awards flipping this list in order to place the Cayenne on top of the “Mid-size Luxury SUV” category and the RX in third, with the GX once again bridging the gap. Either way, it’s a good showing for the RX and Lexus on the whole.

The 2017 RX 350 also represents good value for money, my near fully loaded tester ringing in at $65,350 plus freight and fees, which is where some of its German peers begin. No wonder it sells so well.
©(Copyright Canadian Auto Press)
Car Shopping Tools