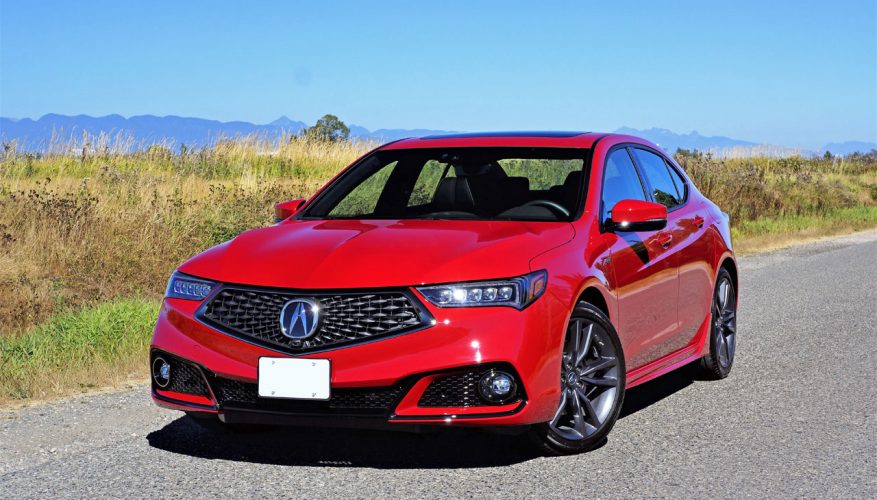 By: Trevor Hofmann
When Acura adapted its Precision Concept-inspired “diamond pentagon grille” to the MDX mid-size SUV I liked what I saw, but I questioned how the bold design would work with other models in Acura’s growing lineup. As it turns out there was no reason for concern, at least with the newly refreshed 2018 TLX sport sedan.

I should also mention that all 2018 TLX trims get a reshaped hood with more sharply sculpted creases, plus the front fenders have been redesigned to meld cleanly into the new frontal styling. Less noticeable changes affect the side sheetmetal and rear design as well, but nothing quite as dramatic as the A-Spec.

This in mind, upgrading to A-Spec trim also replaces the regular model’s chrome trim with matte black side window surrounds and dark chrome around the front grille, making the latter look larger in the process, while bright chrome trim is deleted from the front fascia and the usual body-colour rear deck lid spoiler gets a glossy black treatment. Acura rounds out the A-Spec model with a set of menacing looking twinned five-spoke Shark Grey 19-inch alloy wheels on Michelin Primacy 245/40R19 tires, in place of the more luxury-oriented model’s bright machine-finished multi-spoke 17-, 18- and 19-inch rims mounted on more modest rubber. As a finishing touch, A-Spec badges are added to the front fenders and rear deck lid.

As you might have guessed, Acura retuned the A-Spec chassis to match the uprated wheel and tire package, with its focus on the electric power steering and damper settings, whereas all SH-AWD-equipped cars incorporate a quicker, more responsive steering ratio, stiffer spring rates, and a thicker rear stabilizer bar.

Additionally, the A-Spec model gets a sportier interior that includes an exclusive leather-wrapped steering wheel with a thicker rim and an A-Spec badge, bright red needles and red indices for the primary gauge cluster, brushed aluminum-look trim for the instrument panel and lower console edges, red ambient LED light piping under the inlays, along the edges of the lower console, and within the cupholders, a black headliner and roof pillars, plus heavily bolstered front seats featuring contrast stitching and piping.

Compare this to its German rivals and you’ll quickly see the value advantage, with a similarly optioned BMW 3 Series, Mercedes-Benz C-Class or Audi A4 nudging up against and even surpassing $60k. Some offer more power than the top-line TLX, but I wouldn’t be put off by the direct-injection single-cam 3.5-litre V6 engine’s 290-horsepower and 267 lb-ft of torque, or the torque-vectoring SH-AWD system that puts twist down to all four wheels. These are well-proven commodities that deliver strong performance and noted reliability, but the ZF-sourced nine-speed automatic gearbox was a bit disappointing.

I’m usually a big fan of ZF autoboxes, especially their eight-speed unit used by BMW, Audi, Genesis, Maserati, and the list goes on and on, but the way Acura has set up this new nine-speed design might make a CVT seem sporty. OK, I exaggerate, but only a little. There’s a definite lag when engaging from standstill, yet even when the drive mode selector is set to Sport or Sport Plus modes its shift increments can take up to two seconds to complete, whether rowing up through the gears or downshifting. Believe me, I timed the intervals. Unfortunately it appears this transmission wasn’t primarily designed for performance, or at least the way Acura set it up promotes fuel economy first and foremost.

To this end it rewards with a commendable 12.0 L/100km city, 8.2 highway and 10.3 combined rating as tested, aided by auto start/stop, while the engine itself is wonderful bit of kit, providing a nice growling rumble that does a superb job of unmasking its sizeable displacement. The big pipes in back help to amplify the note, plus of course the aforementioned sport modes. The TLX follows this audible sensation up with strong straight-line performance as noted, at least once rolling, while the A-Spec suspension upgrades resulted in truly athletic capability through tight, twisting corners without intruding on ride quality.

While I’m a bit put off by the transmission’s lethargic attitude, it’s this kind of comfortable livability that makes the TLX so popular in its class. The suspension is wonderfully balanced whether pushing the limits of the road, where it’s dialed in for understeer at its breaking points, or cruising the highway, where it tracks effortlessly. It’s ultra easy to drive around the city, too. Consider this TLX SH-AWD A-Spec a good all-rounder.

The front seats are plenty comfortable too, Acura even adding a powered extendable lower cushion for the driver seat. Most competitors make you pull such extensions out manually if available at all, but this said such DIY designs neatly cup under the knees whereas this one lifts up more like an ottoman, and by doing so tends to lift the lower legs as well. For this reason I needed to leave it fully down, but I’m guessing taller folk might find it works well enough. The leather and microfibre upholstery was very nice, however, the latter proving helpful in the corners where it gripped backside well, while this material might be even more useful in the rear due to less side bolstering. Those back seats are also comfortable with excellent lower back support, while three abreast seating is possible, although better if the middle passenger is smaller in stature. Those to each side will enjoy seat heaters when equipped, although they’ve been known to start squabbles when three’s a crowd.

Now that we’re talking practicalities, the trunk is quite large at 405 litres (14.3 cubic feet). Its lid swings up high and out of the way, plus the lift over height of its sill is quite low for easy loading. The rear seats fold in a typical 60/40 fashion, which means the TLX doesn’t offer quite as much cargo/passenger flexibility as the Europeans that traditionally offer a 40/20/40 split, or at least a centre pass-through. On the positive that trunk is very well finished thanks to carpeting on each side, the top and floor, the latter removable with a large divided compartment below.

Likewise the TLX interior is a class act. I picked it up in the evening, which made its glowing red ambient lighting all the more noticeable. It was an experience unlike anything else I’ve driven, while the semi-digital primary gauge cluster and dual-screen infotainment setup was as bright and colourful as car electronics get. The cabin workmanship is very good too, with high-quality soft-touch synthetic surfaces in all the expected places, plus some harder plastics used below the beltline, which is normal for the class. Acura blings up the interior with the usual satin-finish silver and chromed detailing, all very nicely done, but I truly expected a set of aluminum or stainless sport pedals in such a performance-oriented model. Oddly, the only bright metal by the driver’s feet is the dead pedal, the rest made up of the usual rubberized pads that really look out of place. They certainly don’t hamper performance, but this said they sort of underline the lack of edge noted earlier.

On the positive, the dual-screen infotainment system was redesigned for 2018, with a much friendlier interface that adds Apple CarPlay and Android Auto. A new 7.0-inch capacitive touchscreen sits below, boasting 30-percent quicker response times, while the top display seems higher in resolution with deeper, richer colours.

Also new, every 2018 TLX receives a standard suite of AcuraWatch advanced driver-assistance systems including Forward Collision Warning, Collision Mitigation Braking, Lane Departure Warning with steering wheel haptic feedback, Lane Keeping Assist, and Road Departure Mitigation, while blindspot monitoring with rear cross-traffic alert was added to my top-tier tester as well. These worked flawlessly during my test week, alerting when required and never beeping, flashing and vibrating unnecessarily, which can often be the case with other systems.

I believe the redesigned TLX will attract even more buyers to this already popular model, especially those looking for a sporty ride that leans a bit more toward comfort than extreme performance. On that note the TLX’ compact luxury D-segment remains quite strong despite today’s SUV-crazed world, although while the class appeared impenetrable only a couple of years ago, only Audi’s A4 gained market share from the 2015 calendar year through 2016. That list of losers includes BMW’s mighty 3 Series and Mercedes’ equally strong C-Class, while the TLX continued to outsell all non-German contenders.

Sales have picked up since this renewed 2018 TLX went on sale in June, and it’s easy to appreciate why. Its improved design, superb quality, comfort, good expected reliability and excellent value, plus its strong performance and reasonable fuel economy make for a compelling package that’s hard to pass up. I recommend it for those looking to mix a more relaxed demeanor with their sporty sedan experience.
©(Copyright Canadian Auto Press)
Car Shopping Tools