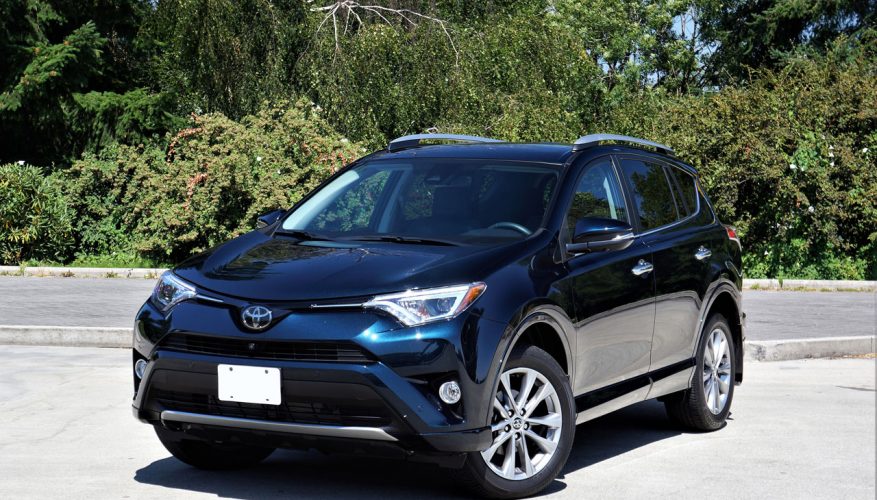 By: Trevor Hofmann
The RAV4 is number one! At the close of 2016, Toyota’s fourth-generation RAV4 became the bestselling compact SUV in Canada, and by a significant margin. What’s more, its 49,103 total sales surpassed the mighty Corolla (by 908 units) for the first time ever, yet another sign of shifting consumer tastes from cars to crossover sport utilities. This also means the RAV4 is now the most popular Toyota in Canada.

Sales aren’t slowing for 2017 either. In fact, if the RAV4 continues at its current pace it’ll easily surpass 50,000 units for another record year. At the close of Q3 2017 the RAV was still in first place with 39,895 sales, beating the runner-up CR-V by 2,181 units and the third-place Ford Escape by 2,718, let alone Nissan’s Rogue that’s a sizeable 6,715 deliveries behind or Hyundai’s Tucson that trails by a whopping 15,650 units. The best of the rest aren’t even half as popular, which goes to show how much Canadians like their Toyota SUVs.

Helping boost sales was a significant mid-cycle update for the 2016 model year, which dramatically changed frontal styling and added a new hybrid version. This said the 2017 model is mostly unchanged, albeit for some new standard features and a totally new top-line trim level.

As part of the Japanese brand’s plan to outfit every new model with the latest active safety features, all new 2017 RAV4s come with the Toyota Safety Sense (TSS) P package. The “P” references “person”, which means its autonomous braking tech will automatically stop for pedestrians as well as other vehicles, while TSS-C (“C” being for “cars”) is the simpler of the two systems.

TSS-C, which comes standard with the Yaris Hatchback, Prius C, and the Corolla iM five-door hatchback (previously Scion iM), includes auto high beams for dimming the headlights when surrounding vehicles come into your line of sight, a Pre-Collision System that immediately slows/stops your car if it detects an imminent crash, and Lane Departure Alert that notifies you if a car is just behind in the adjacent lane.

TSS-P, which gets fitted to the Corolla sedan, the Prius, this RAV4, the RAV4 Hybrid, Highlander, Highlander Hybrid, and Avalon, incorporates all of the above while adding Pedestrian detection for the Pre-Collision System, active steering assist that will turn your front wheels back in the direction you want to go if it detects a car in the adjacent lane when you attempt to change lanes, and dynamic cruise control that maintains a safe distance behind a given vehicle even if that vehicle slows.

The inclusion of TSS-P results in a best possible IIHS Top Safety Pick Plus rating, the RAV4 being the only SUV in its compact class to achieve such a high standard safety rating. That said I wouldn’t want to be in the front passenger’s seat when undergoing the IIHS’ small overlap front crash test as it gets the lowest possible “Poor” rating, with the rest of its categories achieving best-possible “Good” scores and its front crash avoidance and mitigation protection mark being “Superior”. As you might expect, the NHTSA honoured the 2017 RAV4 with its top 5 Star safety rating too, so it’s mostly positive news when it comes to accident avoidance and survival.

While the aforementioned advanced driver-assistance systems improve safety, it’s also important to note that making them standard across its entire lineup as old models get replaced with new ones will make Toyota one of the best-prepared brands for full autonomous driving capability, something many industry players are betting is in the cards for the not-too-distant future.

The other big news item for the 2017 RAV4 is on the other side of the pricing spectrum, a new top-tier Platinum package added on top of Limited trim. Features include fully painted bumpers, wheel arches and rocker panels, plus proximity keyless access for all four doors as well as the liftgate, with hands-free access to the latter, ambient footwell lighting, more upscale interior detailing, Platinum-embossed metal scuff plates, and special Platinum-branded floor mats.

To be clear, the Platinum model isn’t a separate trim, but rather a $1,460 package that can be added to $38,205 Limited trim, the latter already filled with a bevy of high-grade features such as unique 18-inch alloy wheels, a less comprehensive smart key system, pushbutton ignition, driver’s seat and mirror memory, a 360-degree surround parking camera, an 11-speaker JBL Synthesis audio system, a powered glass sunroof, a cargo net, plus front and rear parking sensors.

While I won’t go so far as to complain, the RAV4 isn’t quite up to the same level of luxury and refinement as some of its more recently redesigned peers. For instance, Toyota doesn’t finish the dash top off with premium-like soft touch synthetics, but instead leaves it hard plastic. Then again, the lower portion of the instrument panel gets an upscale contrast-stitched padded leatherette bolster that dips under the centre stack from the left of the primary instruments, right across the front passenger area. The top of each front door panel is finished with soft touch plastic as well, as are the door inserts and armrests front and back. Toyota doesn’t go so far as to give the rear passengers the same level of pampering, however, which is normal for the class although not completely out of the question. For instance, heatable outboard rear seats would be welcome yet remain unavailable, while a panoramic sunroof would add an air of spaciousness overhead.

I recently tested a mid-grade Jeep Cherokee with the latter, while also featuring a full padded and stitched leatherette dash top, the same luxurious treatment on both front and rear door uppers, and overall a more premium-like interior. Likewise, the new CR-V blew me away in top-tier Touring trim, delivering an entirely new level of interior refinement for this compact SUV segment. So in this respect, Toyota will probably want to improve for its next generation.

Of course, the car industry is always a game of catch-up. Mainstream players are continually upgrading to the point that they’re coming close to matching some premium class models, this particular category pushed hard by Hyundai and Kia that don’t have full-line luxury division within their auto group yet-Genesis only offers sedans thus far. Comparatively, Toyota needs to be careful not to let the RAV4’s luxury experience get too close to the Lexus NX that shares many components under the skin. In order to maintain their sales lead, they’ll probably be forced to enhance the RAV4 and NX simultaneously, which of course will benefit both market sectors.

Where Toyota has long been a trusted leader is in reliability, the brand rated highest amongst mainstream volume challengers in J.D. Power and Associate’s most recent 2017 Vehicle Dependability Study, while that survey’s top luxury brand is once again Lexus. This success helps its vehicle hold their values well, the RAV4 having placed third within the Compact SUV category of Canadian Black Book’s 2017 Best Retained Value Awards, albeit first amongst car-based crossover SUVs due to the first-place Jeep Wrangler targeting the mud wrestling crowd and the runner-up Nissan Xterra doing likewise plus no longer available. Of note, the Toyota brand won the third-party analytical firm’s best overall brand within the Truck/SUV sector.

I think reliability matters more to the majority of SUV buyers than performance per se, as does comfort. To this end the RAV4 is a more relaxed driver than most peers, providing nicely formed, supportive front seats, a good driver’s position other than a need for more telescopic travel from the steering column, and a very compliant suspension. This isn’t to say its comfort-biased setup is completely devoid of sporting characteristics, but off the line power isn’t its forte and passing performance, while adequate, won’t get your spine tingling unless you’ve got a limited amount of space to get it done before a highway truck bears down upon you.

This is partially due to its very efficient continuously variable transmission, which is more about smooth, linear power delivery than anything enthusiastic. I’m ok with that, because I’m truly more interested in getting as close to my tester’s claimed 10.7 L/100km city, 8.4 highway and 9.7 combined five-cycle fuel economy rating as possible. On that note, less equipped AWD models do slightly better at 10.5 city, 8.3 highway and 9.5 combined, while FWD trims get a 10.0 city, 7.8 highway and 9.0 combined rating, and the new RAV4 Hybrid puts them all to shame at 6.9 city, 7.8 highway and 7.3 combined.

Now that we’re talking practicalities, all RAV4 trims provide plenty of interior space for passengers and cargo, the second row especially roomy for the class and the luggage compartment one of more generous with 1,090 litres (38.4 cubic feet) behind the 60/40-split second row and 2,080 litres (73.4 cubic feet) when both seatbacks are laid flat. A handy flap folds down to cover the gap between the load floor and the seatback when folded too, so wayward apples and oranges don’t roll into oblivion. Toyota also provided a retractable cargo cover for hiding valuables, as well as a hanging hammock-style net for holding items you want to make certain arrive intact.

It’s not difficult to find reason for the RAV4’s popularity, but I can’t point to one specific attribute or feature. It’s more a sum of the parts equation, the RAV doing everything well enough and looking mighty fine in the process. It’s really for buyers who make good decisions based on sound judgment, so if you happen fall into this camp I’m pretty sure you’ll be more than happy with Toyota’s compact SUV.
©(Copyright Canadian Auto Press)
Car Shopping Tools