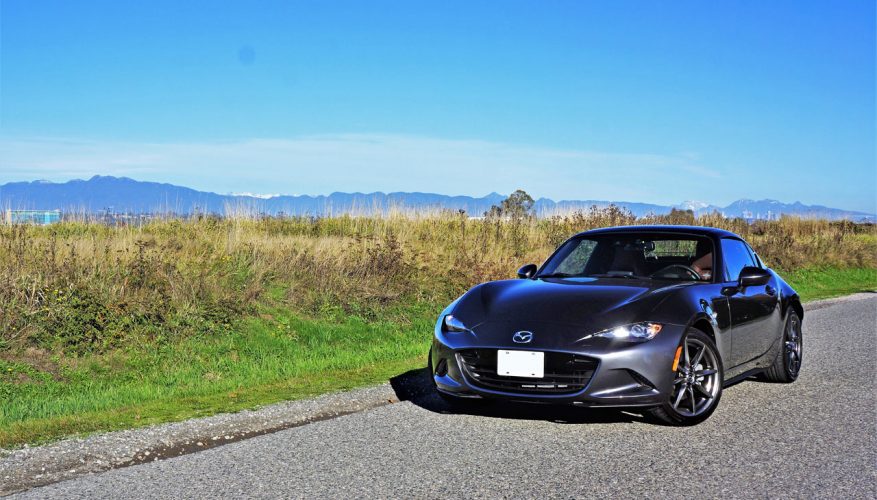 By: Alan Sidorov
The current Mazda MX-5, which was originally named Miata in North America and still goes by the moniker in the U.S., is the fourth evolution of the Japanese company’s sports car. My test car for an August week was the RF version, or retractable fastback, in reality a folding hardtop that takes 13 seconds to raise or lower. Top up or down, it looked clean and dynamic, more visually aggressive than previous models. It should age well. Trunk space was almost the same as the soft-top version, with my duffel bag, computer case, and test instrumentation all managing to fit.

My big decision was where to go with the vehicle. Vancouver traffic didn’t seem like a good idea, so, top down I headed towards the twists and turns of the Fraser Canyon. Next to a motorcycle, a convertible provides the most complete driving experience, to my mind much more fun than being sealed in an air-conditioned box.

The Mazda’s 155 horsepower and 148 lb-ft of torque don’t sound like much, but the car is decently quick. Downshifting a couple of gears with the six speed manual gearbox helped me get past the semis that use the Fraser Canyon route. The MX-5 is nimble and light, with my RF tipping the scales at 1,114 kg (2,456 lbs), a small increase from the soft-top’s 1,058 kg (2,332 lbs).

Mazda did an extensive weight reduction program with this vehicle when it arrived in 2016. In a way, their efforts mirror the now-successful British Cycling Team’s marginal gains program, which aimed for many small improvements. The Mazda engineers pared a gram here and there, so this model weighs less than its predecessor. The chassis is nicely balanced at close to 50/50 front/rear. Combined with rear-wheel drive, this makes for a very agile car.

My test car came with two options, Machine Grey Metallic paint for $300 and an Exclusive package costing $900, which included a black contrasting top and Nappa leather seats. In other ways the vehicle was already well equipped, with LED headlamps and taillights, a Bose sound system, an easy to use display panel, and more. Including freight and pre-delivery inspection, my car’s sticker was $45,195. A GS version of the Retractable Fastback comes in at $40,925, and a base soft top could be yours for $33,825, or possibly less with current rebates.

Not counting the Fiat 124, which is based on the same chassis, the MX-5 has no real competition. The RF is more practical for the climate in most of Canada. I still would not relish putting it through a northern winter, with deep snow and road shrapnel; it’s too nice a car for that sort of abuse. It appears to be very well assembled, and should be reliable. Oddly enough, the car I kept thinking of, as a comparison, was the British MGB.

In 1990, Mazda, with the first MX-5, produced a more sophisticated and reliable version of a classic British sports car, keeping the good parts including light weight, quick steering, and a precise gearbox. The MGB, until the MX-5 came along, was the best-selling sports car in the world. It was also a very popular racing car, especially amongst amateur racers. The MX-5 holds that title now as well.

Both the MX-5 and MGB are snug-fitting vehicles. My 1977 MGB, which I brought along to the track when testing the MX-5 GT RF, weighs within a few kilos of this new Mazda. MGB production ended in 1980, largely due to lack of development budget. The Mazda, on the other hand, is benefiting from a top-notch team of engineers. My only quibbles with the RF were blind spots to the rear quarters, and more wind buffeting than I expected with the top down at speed. The MGB, with neither power steering nor power brakes, is more of a workout. The Mazda is quite a bit quicker, even though my MG’s previous owner spent a lot of money on upgrades.

The MGB design dates back to 1962, and in its era was considerably more capable than the average family car, as the MX-5 is today. My friend Shane, who helped with filming, didn’t think my MGB felt 40 years old. Part of that is likely due to the modern radial tires. Both cars are great fun to drive, and yes, only one is weatherproof.

At the Sidorov Advanced Driver Training home base I hooked both cars to my test gear, the VBox from RaceLogic and the latest from Gtech. When doing acceleration runs I avoid clutch and tire abuse. Within those parameters, the MX-5 consistently reached 100 km/h in 7 seconds, the MGB in a more stately 12.4. Likewise, the Mazda stopped from 100 in 36.2 metres (120 ft), the anti-lock brakes functioning perfectly. Without ABS, the MG took much more driving technique to avoid destroying the tires. I managed 44.2 metres (145 ft). On our skidpad, which has quite grippy pavement, the Mazda pulled 0.91 Gs of cornering force, whereas my MGB suffered from fuel starvation and topped out at 0.76.

Concerning fuel, including city, highway, some brisk mountain driving, and the testing, the Mazda only consumed 7.0 L/100km, which is better than the official combined rating of 8.1.

My last test is one of the toughest in terms of revealing a vehicle’s transient stability. It consists of a hard lane change, second hard swerve to the original lane, then stabilizing the vehicle in a straight line. The MX-5 managed 0.91 Gs with the top down, and 0.93 with the top up. The top probably added a bit of torsional rigidity to an already solid structure, and those numbers are very good indeed. The MG again managed 0.76, and I had to correct for a rear wheel slide in the second turn.

The Mazda MX-5 represents years of evolution, and sets a high standard in compact sports cars. In England, we drove our MG in all conditions, including cross-continent runs and ski trips, but that was kind of masochistic. The MX-5 RF, or even the soft top, promises no such punishment, and lots of driving pleasure.
©(Copyright Canadian Auto Press)
Car Shopping Tools