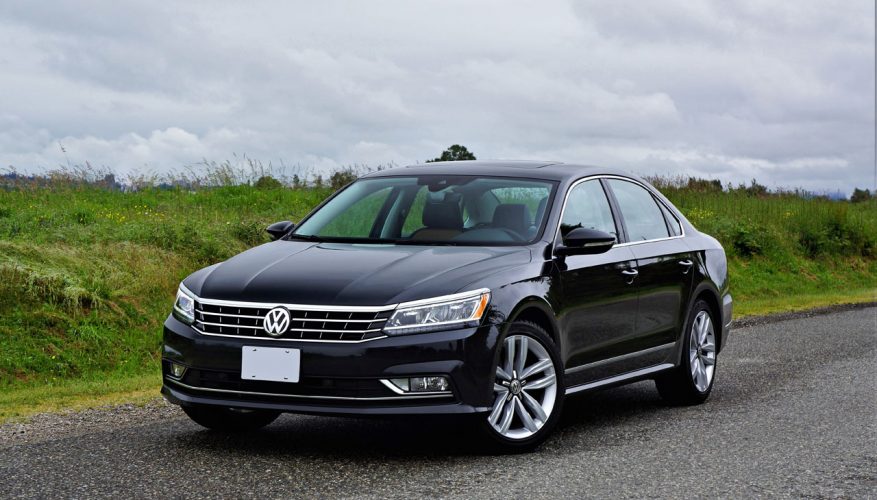 By: Trevor Hofmann
Volkswagen had big hopes for its American-sized Passat when it replaced the smaller Euro-spec B6 model back in 2011 for the 2012 model year. I tested and reviewed a TDI Trendline+ and a 3.6 VR6 Highline that year, and while impressed with the styling, performance and roominess, I was a bit put off by its downgraded interior refinement.

After a first foray with the car my review comments included, “The dash, door uppers and inserts remain high-quality soft touch synthetic, but that’s about it for premium pliable composites as the rest of the cabin is less impressively finished in hard plastics, a disappointment when compared to most top-line models in the mid-size segment, and a downer considering just how well-made the old Passat’s interior was.”

To make matters worse, the replacement Euro-spec Passat B7 was a move up in every respect, and likely a model that would’ve worked very well here in Canada where we traditionally appreciate smaller cars. VW followed up this European-market sedan with a unique five-door Passat Alltrack (similar to our Golf Alltrack, but larger), a model VW’s U.S. division must now be lusting after considering how well Subaru is doing with its Outback, while the entirely new Passat B8, introduced in 2014, is such a styling knockout and appears so upscale inside that any knowledgeable North American Volkswagen fan (the majority of which are quite well versed in the brand’s global affairs) will feel slighted.

After all, we had to wait until last year for a mild mid-cycle update to a Passat design that’s been in our market for seven years without much noticeable change. It’s still handsome in a conservative way, but compared to the Euro B8 or the stunning new Arteon four-door coupe, the Passat looks old as the hills. As you might expect, the car’s sales are considerably softer than its interior plastic these days, with the first half of 2017 resulting in just 1,793 units (including the CC that gets lumped into the Passat’s Canadian sales numbers). All of last year was slightly stronger at 4,023 deliveries, but the model’s steady fall from its initial 2012 calendar year high of 8,019 units is evident when viewing the numbers in between, which totaled 7,909 units for 2013, 7,520 for 2014 and 5,838 for 2015.

This loss of favour is shared with some other mid-size sedans that have been shoved aside for the current crossover SUV trend, VW’s own 2018 Atlas hoping to alleviate some of the brand’s mid-size four-door pain, but the Passat never owned as much market share as its rivals and continues to be a minor player in the lucrative mid-size sedan game. At the close of Q2 2017 it sat ninth most popular in Canada, behind the Honda Accord, Toyota Camry, Ford Fusion, Nissan Altima, Chevrolet Malibu, Hyundai Sonata, (the already cancelled) Chrysler 200, and Kia Optima, only beating the Subaru Legacy and Mazda 6.

If you think it enjoys any more success in the U.S. market where it was purposely designed to compete you’re right, but its eighth placement is only one better because Chrysler has stopped shipping 200s and its dealer stock is almost depleted. In other words, VW will want to rethink its approach to the mid-size market when it comes time to replace this aging model.

For the time being it soldiers through the 2017 model year with a slightly refreshed uniform as of last year, plus some important updates inside, its most notable feature being a completely revised infotainment touchscreen boasting proximity-sensing pop-up switchgear plus Apple CarPlay and Android Auto, while specific to this year its base Trendline trim has been scrapped, as has its top-line Execline offering. This leaves the Passat Trendline + as the new base model, now starting at $25,745 plus freight and fees, plus the $30,745 Comfortline and the new top-tier $35,745 Highline in the mix, the latter trim available with the base 1.8-litre turbo four as well as the 3.6-litre VR6 currently being reviewed, which adds exactly $2,000 to the bottom line.

VW shipped this car in Deep Black Pearl with an eye-catching Titan Black and Golden Oak interior, the latter saddle brown colour referring to the second hue of its two-tone interior motif, which is used for the door panel inserts, the ribbed leather seat inserts, and the contrast stitching found on those seats. The cabin is further upgraded with glossy grey-stained faux hardwood in classic American sedan tradition, and yes I say this last part with tongue firmly in cheek, as I’d rather be surrounded in the optional matte light oak woodgrain that looks and feels a bit more realistic. A generous dose of piano black lacquered plastic adorns key areas as does VW’s usual assortment of satin-finish and bright metallic accents, while a merely average colour multi-information display that sits within the Passat’s classic analogue gauge cluster is totally upstaged by the aforementioned infotainment system.

This new touchscreen interface is a considerable step up over its replacement and truly world class overall, thanks to stylish new graphics, quick response times from its superb mapping and guidance system, navigation being standard in Highline trim while the useful backup camera is standard across the line. This said most competitors offer a 360-degree surround monitor in top trims, but the SEL’s standard 400-watt Fender audio system pumps out tunes with gusto, which is always appreciated. Smartphone setup was easy, while the audio streaming functions worked flawlessly during my weeklong test. Ditto for the dual-zone auto HVAC system, plus the front and rear heatable seats.

I wish I could leave it at that, but not all was rosy as far as VW electronics go. First off, the parking sonar is amongst the most annoying I’ve experienced. Even when in city traffic and coming to a stop behind another car, remembering to leave plenty of space ahead, or alternatively when someone pulled up in their lane alongside, it beeped as if I were parking. It was so bothersome I was forced to shut it off on multiple occasions, but fortunately when really needed, like backing into a tight parking spot, it turned back on automatically.

On the positive, none of the Passat’s other Driver Assistance package features caused such issues. In fact, the $1,350 add-on’s adaptive cruise control worked without fault, as did lane change assist, but notably auto high beams aren’t included in the upgrade, nor is autonomous emergency braking, so the Passat is a bit behind the class average when it comes to advanced driver-assistance systems.

It’s also one of the only cars I’ve seen with a “Poor” IIHS rating, albeit specifically for its headlights. Still, VW will want to address this issue quickly. Likewise, it only gets a “Marginal” rating (third worst out of four) for its small overlap front crash test on the passenger side, whereas all other crash tests result in a best-possible “Good” score. The IIHS gave it a Top Safety Pick rating just the same, whereas the NHTSA gave it a 5 Star safety rating.

Also problematic, halfway through my test week the passenger-side power-folding mirror decided not to power back out again, so I walked around the car and pulled it out manually. I soon learned such hands-on repair work wouldn’t solve the problem, as it merely flopped around uselessly on the way home, seriously hampering rearward visibility. Strangely, after “rebooting” the car it must have reset itself and therefore worked without fuss for the rest of the week, which leaves me wondering when this problem will rear its ugly head again.

As you can tell, life with the Passat wasn’t without drama, but the car is quite comfortable and plenty roomy front to rear, the trunk downright gargantuan at 450 litres (15.9 cubic feet) and fabulously versatile thanks to 60/40-split rear seatbacks plus a centre pass-through, while its fully independent suspension’s ride quality is very good, albeit firmer than some peers. I don’t mind this, because handling is better than average resulting in one of the sportier mid-size sedans in the class.

Likewise, the optional 280 horsepower 3.6-litre VR6 provides plenty of jump at takeoff, followed up by wonderfully smooth and linear power delivery throughout its rev range. This is one of the more potent six-cylinder engines in the mid-size segment, and combined with the agile chassis makes for quite a sporty sedan. No, I’m not going to dub it with sport sedan status, but its six-speed dual-clutch auto is quicker shifting than some of the newer nine-speed units and therefore is much more engaging, enhanced considerably by paddle shifters behind the steering wheel spokes. It doesn’t hurt that the latter item is one of the segment’s best, a flat-bottom, soft leather-wrapped affair that’s ideally shaped for performance driving.

At the opposite end of the spectrum the larger engine is still reasonably efficient with fuel, eking out a claimed 11.9 L/100km city, 8.5 highway, and 10.4 combined rating compared to the standard 1.8-litre four-cylinder that’s good for 10.1 L/100km city, 7.0 highway and 8.7 combined.

Truly, the Passat isn’t without merit, which is reason enough for its small but loyal following. Nevertheless, contemplating its shortcomings puts me back to wondering how much better the nameplate would do if the Euro version was offered here, and on that note how much further our aging American-spec model will slide down the 2018 mid-size sales chart with the arrival of the most compelling Camry and Accord offerings ever. Volkswagen will make improvements to the 2018 Passat, a 177 horsepower 2.0-litre four-cylinder replacing the base 1.8-litre unit for a 7-hp bump in power, but that’s probably not enough to garner much attention.
©(Copyright Canadian Auto Press)
Car Shopping Tools