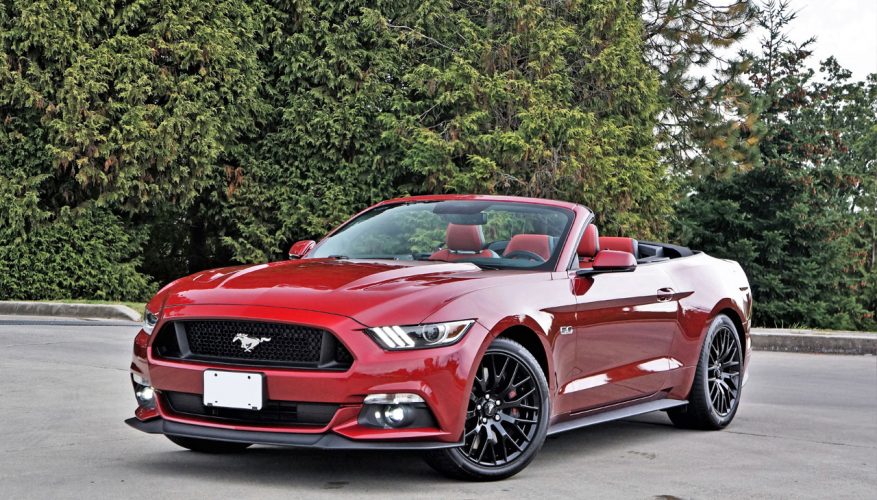 By: Trevor Hofmann
You’d think for a car available non-stop since 1965 there’d be more than six generations to the legendary Mustang’s credit, but Ford ran the first generation (the many iterations of which any genuine car enthusiast equally loves and lusts after) for eight years and made even better use of the 1979–1993 third-gen Fox bodied model. I don’t think you’d get much argument from all but drag racing fans that the current rear independent suspension-enhanced sixth-gen model, available since 2015, is the best Mustang ever.

It takes little coaxing for me to accept a week in any of its trims, the first of this type being a 2015 Mustang GT Premium Convertible, which was followed by the new 2.3-litre turbo four-cylinder 2016 Ecoboost Fastback and a 2016 GT Convertible, the latter much like our most recent tester other than its eye-searing Triple Yellow paintjob.

Actually, this 2017 GT Convertible Premium is coated in the same Ruby Red exterior paintwork and its seats covered in identical Red Line leather as the 2015 example (the Ecoboost Fastback was finished in Oxford White on black, if you must know), these two cars appearing near identical if it weren’t for the same GT Performance Package as added to the Ecoboost Fastback, that upgrade beefing up the wheels to glossy black 19s, plus a whole lot more.

At the heart of the GT is a 435 horsepower 5.0-litre V8 with 400 lb-ft of torque, capable of catapulting the 1,756-kilo (3,863-lb) ragtop to 100km/h in less than five seconds with standard launch control engaged. Ford was kind enough to include its six-speed manual transmission in this tester, which is the best way to go if you don’t mind a lot of DIY activity in city traffic.

It certainly didn’t put me off, especially when congestion subsides and an open stretch of tarmac reveals itself. Put your weight into the metal pedal farthest to the right and the drudgery of a workday’s routine immediately vaporizes as the next shift ensues, followed by a smooth release of the left foot and yet more power by the one on the opposite side. Everything has a purposeful weight to it; even the short-throw shifter that naturally finds neutral yet needs coaxing into its upcoming gear.

The manual gearbox is Getrag’s MT-82, added to the lineup in 2011 yet enhanced for overall feel and durability since, but the most noticeable improvement dynamically is the independent rear suspension (IRS) that came two years ago, forcing Ford to strengthen its 8.8:1 rear diff to “Super 8.8” capability, or rather 9.75:1-why they call it a Super 8.8 is anyone’s guess.

No matter, the fat 19-inch Pirelli P-Zeros dig in with a whole new level of refined prowess in spite of the road surface beneath or direction pointed. Yes, the previous live axle forced a higher level of respect, but there’s less need for that now. The modern car’s integral-link IRS maintains un-Mustang-like control, even when pitching it sideways over irregular pavement, while ride comfort has improved as well. IRS systems are inherently heavy compared to live axles, one of the reasons the Mustang’s many drag race fans weren’t appreciative of the 2015 upgrade, so Ford compensated by adding lighter aluminum knuckles and H-arms. The new car’s anti-squat capability is twice as good too, whereas anti-lift is 10 times better for improved pitch control when digging deeper into the throttle or slamming on the big Brembo brakes.

In case you’re wondering, there’s nothing new about the 2017 Mustang GT over its 2016 counterpart, other than a couple of exterior colours and the removal of the cool turn signal indicators from within the hood scoops -I didn’t even notice. For reasons I can’t ascertain the fuel economy has been adjusted to 16.7 L/100km city, 10.2 highway and 13.8 combined with the manual or 15.5 city, 10.3 highway and 13.2 combined with the auto, but I doubt anyone buying a V8-powered muscle car cares about such things. If you do, consider the 2.3-litre turbo-four’s 11.2 L/100km city, 7.8 highway and 9.8 combined rating, which is superb for the class.

What matters more is the car’s new level of near-premium refinement, allowing those who lust after the GT Convertible’s sensational styling and outrageous performance to trade in their BMW cabriolets without feeling like they’re slumming it. It’s not quite up to the standards set by the 4 Series, but it gets more soft touch synthetic surfaces than any previous Mustang, with special attention paid to the dash top, instrument panel, and door uppers. Its padded door inserts are trimmed in perforated leatherette to match the sport seats, my tester’s in racy red, the latter items finished in genuine leather. The seat perforations are for more than just show, incidentally, their breathability adding coolness in the heat of summer that can be further improved by three-way ventilation.

Additional cabin details worth noting include engine-turned aluminum dash trim with a sweet set of chrome-rimmed secondary gauges at centre. Chrome trims the dual-zone auto HVAC system’s circular vents as well as the even larger dials at each side of the primary cluster, plus elsewhere, while satin-silver is also used generously. I’m in love with the red and white ignition button next to the equally awesome chromed toggle switches on the centre stack, the latter including selectable steering and drive modes including Sport, with additional highlights being the knurled metal audio knobs and scrolling HVAC switches with the same metallic detailing.

I could go on, but will resist as there needs to be something left for you to discover on your own. In case you’re wondering, most everything noted comes with Premium trim that’s standard with the 2017 GT Convertible, with some items not yet mentioned including HID headlights, LED daytime running lights, sequential LED taillights, Pony projection LEDs under the side mirrors, illuminated sill plates, ambient interior lighting, powered seats, enhanced security, and of course Ford’s superb Sync 3 infotainment that was added last year. It’s excellent, and not just because it includes Apple CarPlay, Android Auto, and plenty of downloadable apps, but it also gets sharp looking graphics, quick-responding functions, and a particularly handy backup camera.

On top of all this Ford added rain-sensing wipers, adaptive cruise control and forward collision warning for $1,600, voice activated navigation for $800, the aforementioned Ruby Red paint for $450, while the Red Line interior upped the price by $500, the total coming to just $58,998.

I don’t know about you, but if you were to price out a BMW with similar performance and features you’d be well into $80k, and while I’m not comparing the all-round road and track capability of this Mustang GT Convertible to an M4 Cabriolet, you’ll likely have just as much fun in this one for tens of thousands less while enjoying a bit of modernized classic Americana in the process. No wonder the Mustang outsells every other performance car by a healthy margin.
©(Copyright Canadian Auto Press)
Car Shopping Tools