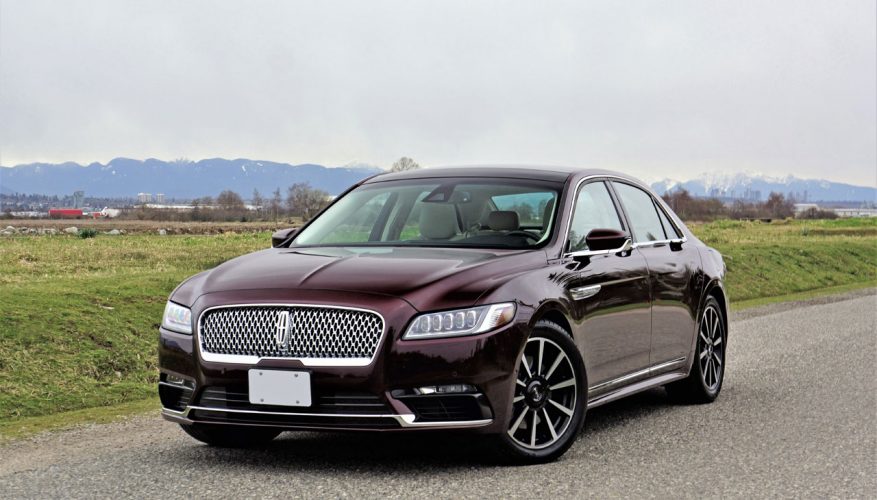 By: Trevor Hofmann
I have an admission. I’m thoroughly impressed by the new Lincoln Continental. Truly, I haven’t been so fond of a domestic luxury sedan since Cadillac started getting things right with its CTS.

Full disclosure, I haven’t yet tested the new Cadillac CT6, so I won’t attempt to compare the two. Even if I did I can’t see the Continental falling short, as it completely stands on its own merit. What I mean is, the new Conti isn’t Lincoln trying to be something it’s not, ironically a continental European. In fact, it’s truer to American luxury ideals that any domestic car has been in some time, espousing a unique identity that should be openly celebrated rather than shied away from as if there’s something wrong with big, pampering luxury sedans.

One glance is all that’s needed to appreciate what Lincoln has done right. Initially eyeing it at an auto show, it seemed to have too much Jaguar XJ in the design, and I’ve heard others compare it to Bentley’s Flying Spur, but now that I’ve lived with it for two weeks, first with this 2017 Lincoln Continental Reserve 3.0L AWD and more recently with a near identical 2018 version upgraded with the impressive rear seat package, plus spent some quality time with a new 2017 XJ 3.0 AWD (review forthcoming, but check the footer below for the 2016 model) and a 2017 Flying Spur V8 (ditto the footer), it’s easy to see the Continental only shares an abundance of chrome with the first and similarities in its shoulder line with the second. Chrysler’s 300 is a more obvious homage to the Flying Spur, where this Continental really stands out as a fresh, new, original American design.

My Reserve trimmed tester looked sensational when suited up in optional Burgundy Velvet paint, and if you think the glittering exterior is eye-grabbing you really need to check out its luxuriously lined Cappuccino leather interior. The pedestal-style seats look as if they’re pulled right out of a concept car, and their 30-way powered multi-contour comfort is out of this world. Seriously, these are some of the better seats I’ve had the pleasure of experiencing, with massage capability that actually works, all of which hardly makes sense when factoring in this particular Conti’s tested price of just $77,050 before freight and fees.

OK, paying $80k for a Lincoln might be difficult to stomach for those not familiar with the price of luxury SUVs such as the Navigator, but the new Continental is no MKZ either. The latter shares more than Ford would like to admit with the very good, but quintessentially mainstream Fusion, and while this Continental utilizes a variation of the same Ford CD4 platform it’s hard to find resemblance to any blue oval-branded model at all. From overall styling to tiny details like switchgear the argument is a non-starter, unless you want to compare the knurled bright metal rims around the climate control interface’s centre dial to the volume knob or rotating gear selector in the top-line Fusion Platinum, but that would be silly. Likewise there’s a familial connection via the infotainment touchscreens, but only because Ford’s Sync3 is so advanced that much of its underlying systems are used by both brands. The lesser division’s display is appropriately blue and white with unique graphics, whereas Lincoln’s is gold and black with its own stylistic differentiators. Criticize if you must, but I recommend spending time with the new Continental before judging.

Truly, the Continental Reserve interior is fabulous, with equal parts elegance and technology. Most surfaces that aren’t genuine open-pore hardwood, chromed metal, or digital are soft to the touch, whether made from composites or supple leathers. Front seat adjustability borders on the ridiculous, resulting in two of the most comfortable chairs in the industry. The same can be said of those in the rear if upgraded to the $5,000 Rear-Seat Package (RSP). As noted, those in the first row of my tester were Lincoln’s $750 optional 30-way powered multi-contour type (the base 24-way seats aren’t too shabby either). Lincoln registered no less than 50 patents for these, whereas the optional rear seats get 40/20/40-split folding/reclining via powered actuation, four-way powered lumbar support, airliner-style head restraints, heated and cooled cushions, side window sunshades, a twin-panel panoramic moonroof, rear-duct B-pillar registers, inflatable safety belts, and a flip-down centre armrest with an impressive set of integrated audio, climate, and sunshade controls, plus cupholders.

I’ll give you the full lowdown on the upgraded seats in my 2018 review, but take note this 2017 model featured the same panoramic moonroof as a $2,200 standalone option, always a highlight but especially so when brightening up an interior like this. This car also featured the $5,500 Luxury Package, boasting a set of sharp looking LED headlights and a phenomenal sounding 19-speaker Revel Ultima audio system with stunning drilled aluminum speaker grilles, while a $4,000 Technology Package added a head-up display, adaptive cruise control, a 360-degree surround parking camera, semi-autonomous parking, pre-collision alert and assist with pedestrian protection, active braking, brake support, lane departure warning, lane keeping assist, a driver alert system, and more.

My tester was upgraded from the standard 2.7-litre V6, six-speed auto with paddles, and torque-vectoring AWD combination that’s good for 335 horsepower and 380 lb-ft of torque, to a 3.0-litre V6 with 400 horsepower and 400 lb-ft of torque, plus the same gearbox and AWD for an extra $3,000. Despite its considerable power I won’t go so far as to call this top-line Continental a sports sedan, but it certainly makes for a thoroughly engaging luxury car. Get hard on the throttle and the turbocharged V6 makes its V8-like presence known by dashing from standstill to 100 km/h in just 5.4 seconds, aided by grippy all-wheel drive, and whether rocketing down the open freeway, coursing through fast sweeping curves, or quickly navigating crowded city streets, it feels plenty secure about its role of high-speed executive shuttle.

Honestly, during the first portion of my weeklong test I drove it the way a Lincoln should be driven, or so I thought. I enjoyed its plush ride and seemingly countless creature comforts while staying well within posted limits, appreciating its commendable spirit off the line but not tempted to push it too much. I don’t tend to drive fast on a daily basis anyway, and the Lincoln didn’t tempt me like a Mustang GT would. Then I needed to be somewhere quickly and started driving as if it were a BMW. Lo and behold it reacted well, slotting into corners with relative precision and only leaned slightly when pushed hard into sharp bends. What a surprise! This thing has legs. In fact, it became my go-to vehicle for the week. Anytime I needed to drive anywhere I found an excuse to take the Conti, its claimed 14.4 L/100km city, 9.7 highway and 12.3 combined fuel economy not even throwing me off despite being thirstier than a number of rivals. Of course, my choice was as much about those creature comforts as its performance.

Lincoln may just have found an ideal balance of luxury and sport with the new Continental, but more importantly it’s created a car that’s equally engaging to look at, be inside, and drive. Weaknesses would be a six-speed autobox that’s not as smooth or quick shifting as competitors while lacking the marketing excitement of seven, eight, nine or even Ford’s own 10-speed transmission that currently resides in similarly powered F-150s, and this despite a pretty cool pushbutton shifter that’s located right beside the centre display where it’s easier to reach than the MKZ’s, the lowest button selecting Sport mode that stiffens the adaptive dampers to good effect yet gets a bit overzealous with the responsiveness of its other driveline components. Also not quite up to snuff is panel alignment on the inside and out -the trunk lid’s inner and rear fender’s outer taillight clusters don’t line up, for one. On the positive the trunk itself is sizeable at 473 litres (16.7 cubic feet).

The Continental’s yesteryear meets tomorrow styling could make me look past some of its faults, and I haven’t even mentioned the fabulous winged mirror pedestals, those exposed front door “hinges” just below, the even more artful door handles that follow along the beltline with their nifty electric releases (the interior releases are electric buttons as well), the dazzling full-width LED taillights, etcetera, etcetera. It really is a feast for otherwise bored eyes, enhanced by luxuries and performance that heighten all the other senses.

So if thoughts of the Lincoln brand merely conjure up memories of Town Cars whisking you away from airports, you owe it to yourself to change that perception. You may not purchase one, but after spending some time behind the wheel you’ll have a new appreciation for North American design and engineering.
©(Copyright Canadian Auto Press)
Car Shopping Tools