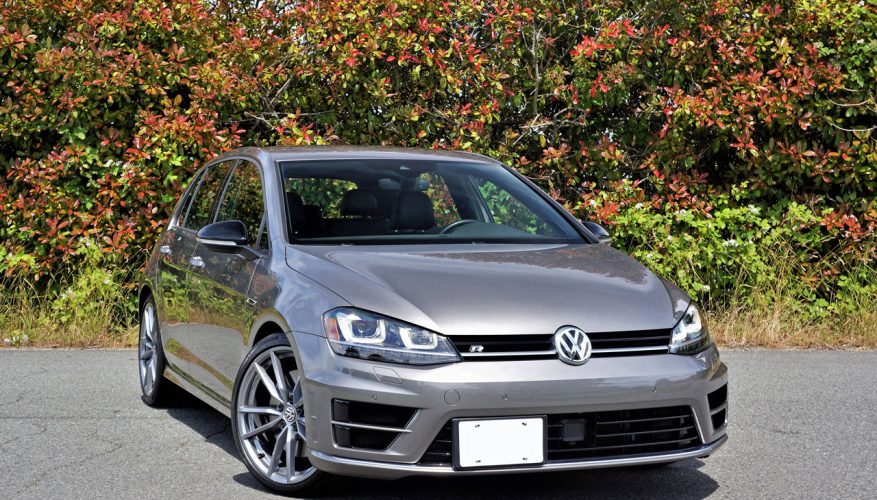 By: Trevor Hofmann
Ask any auto scribe to name their top 10 cars and Volkswagen’s GTI will probably show up somewhere on the list, or at least it did before this Golf R arrived.

At first glance it doesn’t look all that different, other than a few unique aero aids, 19-inch Cadiz alloys, a quad of chrome-tipped tailpipes poking through a rear diffuser, and a big “R” badge on the liftgate, but VW’s usual subtlety (compared to Subaru’s dinner table-sized WRX STI wing) masks a seemingly rally capable drivetrain boasting a 292-horsepower 2.0-litre four-cylinder engine with 280 lb-ft of torque (the same mill as used in the Audi S3 and TTS Coupe), a six-speed manual or dual-clutch automated transmission, and a sport-tuned version of Volkswagen’s already capable 4Motion all-wheel drive.

Before even being handed the Golf R keys, I’d already driven most cars in this hyper-hatch class (the new Focus RS excluded) and therefore had accumulative biases along with a longtime favourite, although full disclosure causes me to admit that my first “R” VeeDub tester was a bright red 2016 model. Yes, we received it, drove it, shot it, drove it some more (and some more) and then lost the interior photo set, leaving me with some wonderful exterior shots that ardent readers will notice were used for the my Golf R garage entry (because I didn’t want to completely waste them). So, this classy Limestone Grey Metallic-painted 2017 version is actually my second Golf R.

Annoyingly true to VW form, I had to test this quickest-ever Golf and fastest VW overall with the $1,400 optional automated transmission instead of its standard six-speed manual. Ditto for last year’s example, which is a shame considering how much more engaging a DIY gearbox can be, and how good VW manuals are. Therefore, despite driving two different Golf Rs, I can’t report on both transmissions. For those that count zero to 100km/h sprint times and other specs, this six-speed DSG is no doubt the quicker shifter at 5.2 seconds, with simple tugs on standard paddles all that’s needed to swap cogs.

While the process isn’t as physically involving, a good thing during busy commutes, it’s a lot more engaging than most automatics and a helluvalot more entertaining than some performance-oriented CVTs in this class, but truth be told VW’s DSG is nowhere near as over-the-top-capable as the one in Mitsubishi’s Evo MR-RIP. That’s the best autobox in this class, as is (or should I say, was) its otherworldly all-wheel drive system, but alas it is no more.

This said the Golf R’s powertrain provides a more mature and refined delivery than the Evo’s more immediate punch. This can be said of most other sport compacts its up against too, with the power supply nice and linear yet not without suitable drama. This is true for the suspension setup as well. It’s ideal for aging buttocks, pampering with standard adaptive dampers that offer three levels of comfort-oriented firmness.

Really, you’d think with all that power it would be a wild ride, but despite the R being brilliant fun off the line and even better through the corners it’s a refined near luxury machine compared to it’s domestic and Japanese contenders. Sure the sound of the engine reverberates thought the cabin at takeoff, but it feels more like a compact Audi than anything remotely high volume, the Golf being my reference here, not the R.

It’s one of the nicer sounding four-cylinder exhaust notes I’ve had the pleasure of hearing, complete with an obnoxious little blatt out the back after every shift when in Race mode, the shifts particularly quick when placed in this most entertaining setting. All modes are displayed in the top left portion of the big infotainment system, although before delving into the impressive details of these finer points, I’d better give you some background and an overview of what’s new.

The R arrived for model year 2016 and therefore the 2017 model carries forward mostly unchanged except for standard blindspot monitoring, and standard Driver Alert, which pays attention to a variety of parameters and then recommends you take a break when you may be getting tired. The 2017 model also includes a Sport HMI display that provides performance details within the base 6.5-inch colour infotainment touchscreen (that also features a rearview camera), while the exterior paint palette has grown to include the Limestone Grey Metallic shown here.

You’d think this most potent Golf would be racier looking than the GTI inside, but in fact it’s cabin focuses on delivering a more mature (there’s that word again) premium experience than luring in those easily swayed by flashy styling and glitzy gizmos. Its high (for a mainstream volume-branded compact hatchback) $40,695 base price might have something to do with its more luxury-oriented approach, the GTI with its more provocative interior and eye-grabbing exterior, replete with front fascia styling strakes, targeting a younger demographic with its more attainable $29,495 starting price.

The only way to make the Golf R more practical would be to add a wagon variant, but so far VW hasn’t responded to the ultimate wishes of its five-door zealots. Still, standard 40/20/40-split rear seatbacks maximize utility.

If you want superb power and grip from a car that flies under the radar better than any of its super sport compact peers, the Golf R should be high on your priority list. I only hope VW gives me a 2018 model to play with. Could I order that up with a manual gearbox please?
©(Copyright Canadian Auto Press)
Car Shopping Tools