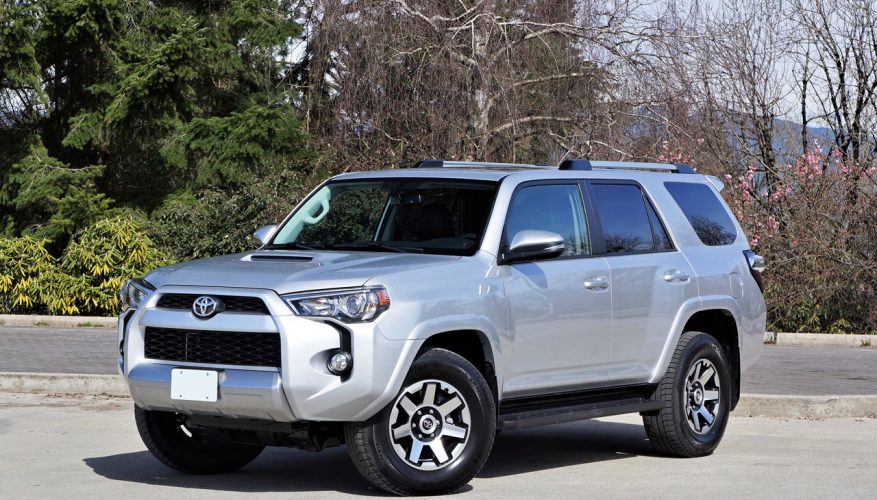 By: Trevor Hofmann
The TRD Off Road is far from top-of-the-line, actually sitting second in a range that includes five trims, but the only one I’d rather have is the top-tier TRD Pro. Why?

They’re both fully optimized for hitting the trail, the TRD Pro a $52,195 4×4 stuffed full of nearly everything Toyota has available for the 4Runner, including an intense new blackened matte grille, blacked out front and rear bumper caps, and 17-inch matte black alloys on 31.5-inch Nitto Terra Grappler off-road rubber hiding beefy Bilstein dampers with remote rear reservoirs behind. It looks best in exclusive Cement grey paint, although that’s just how I feel. Toyota offers it in Alpine White and Barcelona Red metallic too, while all get black SofTex pleather upholstered interiors with plenty of TRD Pro branded details.

That brutish model is actually based on the $46,720 TRD Off Road shown here, which starts $1,920 higher than $44,800 base trim. The TRD Off Road is less intimidating thanks to a body-colour grille and satin silver bumper caps, these items a bit harder to make out with our tester’s Classic Silver metallic paintwork. Toyota offers a wider range of exterior colour options in TRD Off Road trim, but alas no Cement grey. Its six-spoke machine-finished 17-inch alloys with black painted pockets more than make up for any lack of exclusivity, as does the bulging scoop atop the hood and circular fog lamps integrated into its angularly carved front corner vents.

The latter two items come standard, but Toyota adds a classier chrome-laden grille strikethrough and unique chromed front fascia design for Limited trims, while chrome mouldings wrap around the sides in an attempt to dress this string-tied cowboy up for a tux and tails black-tie dinner, which is why I like the 4Runner’s purer 4×4 body styles best.

I also appreciate that Toyota never tried to neuter the 4Runner into a raised family wagon like Nissan did with the Pathfinder, a model that continues forward in name only. Instead, Toyota allowed the 4Runner to remain true to its 4×4 roots and created a completely new model to attract less adventurous families that nevertheless wouldn’t dare drive a minivan, and in hindsight the bigger Japanese brand benefits from a Highlander that regular outsells the Pathfinder, and a 4Runner that still pulls in plenty of diehard customers all on its own.

The 4Runner isn’t completely alone in the off-road capable segment, but it has fewer competitors now that it endured through the ’80s and ’90s. In fact, it’s the only classic body-on-frame SUV in its mid-size class. While Ford’s Explorer used to be truck-based, it now rides on the same mid-size car platform as the unorthodox Flex, but it nevertheless offers a Land Rover-style preprogrammed all terrain system that does well enough off the beaten path for many, and Dodge’s Durango, also unibody in design, remains off-road ready too. Of course, Jeep’s Grand Cherokee (unibody too) maintains its muddy reputation, and VW’s Touareg isn’t quite the 4×4 beast it was initially, but still offers some semblance of trailblazing prowess (although due to its stratospheric price few seem to care anymore). Still, if you ask the majority of brazen bushwhackers which SUV they’d trust to take them 50 miles inland on an unkempt cattle trail, most will choose the 4Runner.

Nobody’s going to buy a 4Runner for its claimed 14.3 L/100km city, 12.0 highway and 13.3 combined fuel economy rating, but its 4.0-litre V6 is robust enough at 270 horsepower and 279 lb-ft of torque. More importantly it’s proven reliable, as has its comparatively archaic five-speed automatic transmission. Don’t laugh. It’s more likely to get you out of the wilderness in one piece than most of the 4Runner’s peers, while its 2,268-kilo (5,000-lb) tow rating is pretty decent for a V6-powered SUV as well.

If you’re thinking a rugged 4×4 like this must be a pain in the back for everyday use, nothing could be further from the truth, at least with the 4Runner. Let’s not forget that Lexus sells a version of this truck with basically the same suspension setup, although to be totally clear the GX 460 comes standard with a driver-adjustable road leveling air suspension. Toyota’s version, exclusive to previously noted Limited trim, is called X-REAS, and doesn’t allow adjustment from comfort to sport modes or driver-actuated raising and lowering, but by cross-linking each shock to it’s diagonal counterpart via a gas hydraulic chamber it automatically reduces body sway, pitch and roll, resulting in better handling a more comfortable ride. I’ve tested the Limited a number of times previously and its agility and comfort compromise always surprises me, but that’s not to say this more off-road focused model was a letdown on the road. In fact, this TRD Off Road version delivered excellent compliance over rough pavement and was plenty capable when pushed hard on curving backroads, with speeds kept in check.

Those opting for TRD Off Road trim may be more interested in knowing more about KDSS, which stands for Kinetic Dynamic Suspension System. Invented by a small Aussie R&D firm named Kinetic Pty Ltd in Dunsborough, Western Australia, KDSS uses hydraulics to disengage the front and rear jointed stabilizer bars for completely independent motion on extreme terrain. The system automatically activates when sensing a wheel drop into a rut or off the edge of a steep hill, maintaining traction at all four corners. Fortunately it won’t engage when hydraulic pressure is equal, such as around town or when traveling at high speeds on the freeway. This feature alone separates 4Runners from mere 4×4 wannabes, helping to keep it alive and well as a sought after off-road cult favourite.

You’ll appreciate this diehard fandom when it comes time to resell, the 4Runner’s resale value second only to the now discontinued Toyota FJ Cruiser amongst mid-size SUVs in the Canadian Black Book’s most recent Best Retained Value Awards. Toyota’s Highlander was third, by the way, while the automaker’s big Sequoia took home first place in the Full-Size SUV category, the Tacoma and Tundra first in their respective truck classes, and the rest of the various top-three lists littered with Toyota and Lexus products.

I probably don’t need to recommend the 4Runner, so consider my two thumbs up a confirmation of what you already know. This is the go-to SUV for serious adventurers. The 4Runner is a wonderful anomaly in today’s mostly gentrified SUV market, this TRD Off Road model, plus the aforementioned TRD Pro, purer still.
©(Copyright Canadian Auto Press)
Car Shopping Tools