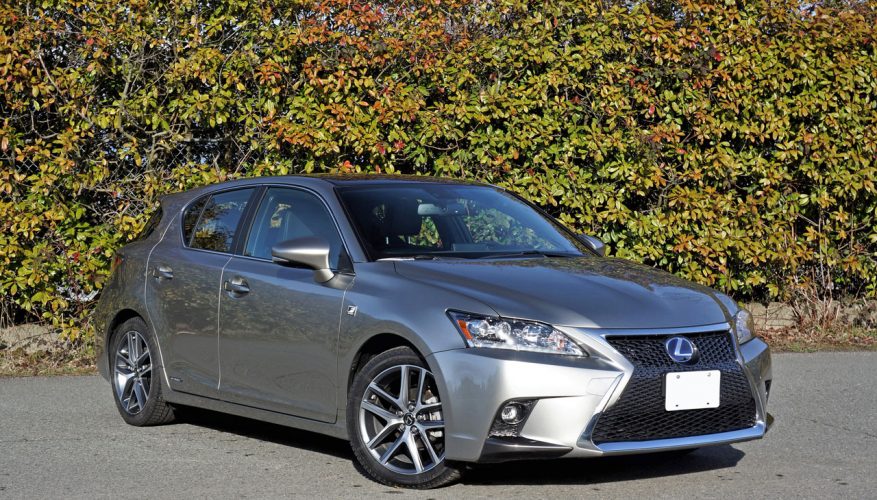 By: Trevor Hofmann
With fuel prices once again soaring in most Canadian cities, the long-in-tooth Lexus CT 200h just might be one of the most relevant entry-level luxury models available today. Only Audi’s more advanced plug-in A3 e-tron can give it a run for its money regarding fuel economy, although the German is initially $8,150 more expensive than the $32,750 CT. Then again, you can get much of that $8k back through provincial government greenification incentives if you live in Ontario, Quebec or BC, which the non-plug-in Lexus unfortunately doesn’t qualify for.

Updated just a few years ago, the CT remains fairly fresh looking thanks to Lexus’ new spindle grille and aggressive frontal body cladding, while its profile and sporty five-door body style has always been good looking.

It uses an older generation Lexus Hybrid Drive powertrain, incorporating a 134 horsepower 1.8-litre Atkinson-cycle four-cylinder engine for driving the front wheels via a continuously variable transmission (CVT), while a proven (a.k.a. old-school) Ni-MH battery pack powers an electric motor that more often than not is used to assist the gasoline engine in true hybrid form, although the CT can drive under pure EV power for very short distances at extremely low speeds (bumper-to-bumper traffic, parking lots, etc). If the power unit sounds familiar, it’s identical to that used in the previous Toyota Prius, and like that old Prius the CT delivers superb claimed fuel economy at 5.5 L/100km city, 5.9 highway and 5.7 combined.

While the drivetrain is pulled from the old Prius, the platform architecture is sourced from Toyota’s global compact car line, which made sure a fully independent suspension lived up to Lexus’ handling and ride quality standards. Its road holding is even more engaging in as-tested F Sport trim.

Seriously, you can still get a CT 200h with a narrow one-inch-tall black-on-green monochromatic dot matrix-style display, so if you’re vehemently opposed to all things modern this car in base trim is your retro ride. Of note, Lexus offers an Executive package that adds display audio and much more to the non-F Sport model, with features like a bigger backup camera no longer housed within the rearview mirror (the latter is now standard, however), navigation, voice activation, 10-speaker audio, auto-dimming rearview and side mirrors, a garage door opener, rain-sensing wipers, LED headlights, leather upholstery, driver’s seat and side mirror memory, bigger 17-inch wheels and tires (the base model gets rather puny looking 16s), and more.

The F Sport Series 1 package includes some of these items, such as the rain-sensing wipers, the upgraded backup camera, and the auto-dimming interior mirror, but the leather gets swapped out for Lexus’ NuLuxe breathable leatherette. If you want to combine leather and the other Executive features with the sportier styling and performance improvements you’ll need to upgrade to the F Sport Series 2 package.

If all of this sounds too rich for your tastes, you can simply get the CT 200h with a just-over-base Touring package that adds the LED headlights, LED fog lamps, 17-inch alloys, aluminum treadplates, and powered moonroof from the Executive package for a new total of $36,100 before freight and fees. On that note, the F Sport Series 1 package ups the CT 200h price to $38,500, the Executive package bumps it up further to $40,600, and the F Sport Series 2 package pushes it to $41,350.

Despite adding two new colours and subtracting one for 2017, the CT 200h isn’t exactly ideal for those who pursue personalization by way of stock paint. The good news is there’s no extra cost when opting for one of its five shades and hues, the bad news being that dramatic F Sport Blue is no longer on the menu. Instead we get a darker blue dubbed Nightfall Mica and as-tested Atomic Silver, while carryover colours include Ultra White, Redline (bright red) and Obsidian (black). Oddly, all choices include a black painted rooftop panel, and by that I’m not referring to the pillars or roof’s top edges, but rather a shiny black centre section the continues into the rear spoiler. It looks nice and sporty, but it makes it appear as if the roof is made from a large piece of glass, which is kind of a letdown when seeing the aforementioned moonroof from below.

I suppose this takes us inside, where the CT 200h F Sport remains a well-made compact hatch that certainly appears more modern with the previously noted infotainment display atop the dash. Lexus applies most of the expected soft touch surfaces, some even finished in stitched leatherette, and the aluminum trim is attractive and quite fitting for this sportiest model, but even in this top-line trim the otherwise bright and colourful analogue gauge cluster is missing a modern multi-information display, instead making do with a tiny monochromatic trip computer, whereas the rightmost steering wheel spoke is mostly devoid of switchgear thanks to cruise control functions still mounted in behind on a classic stalk, and, well, you get the idea. The controls for the infotainment system are pretty remedial too, and the display’s graphics are as dated looking as the rest of the car.

At least you don’t need to fumble for your keys to get inside, and a button starts the engine, but a foot-operated parking brake detracts from both modernity and sportiness, a strange sight when placed beside this F Sport’s row of shiny metal pedals. If you’re getting the feeling the CT 200h put me off, that’s not completely true. While I’m disappointed in Lexus for mostly neglecting this entry-level model that’s only received a facelift over its seven-year lifecycle, it still has merit.

It has always been a pleasant car to drive, with sporty handling and a very nice ride. Of course, I think this can be said of most entry-level premium cars, but few offer the aforementioned fuel economy or this model’s penchant for diehard dependability. Its five-door hatchback body style is practical too, albeit rear cargo space is limited to just 405 litres (14.3 cubic feet) when rear passengers are aboard and 965 litres (34.1 cubic feet) when vacated, while the seatbacks only split 60/40 and don’t provide a centre pass-through.

I suppose its upcoming cancellation should come as no surprise, with both Lexus’ Canadian and U.S. operations announcing there won’t be a 2018 model. A refreshed version will soldier on in other markets, probably including Europe where hatchback love reigns supreme and the CT 200h has enjoyed slightly better sales per capita, but it’s seen its best days here. So consider this a warning if you’ve always wanted one yet hesitated, or currently own an older version and would like to trade up. I would totally understand your reasoning if you did, but in the same breath I’d recommend testing one of its rivals, such as the previously noted A3 e-tron, before you sign on the dotted line. You should also push for a sizeable discount, as discontinued models rarely hold their values high.

Right about now I feel as if this should be some sort of a swansong article, paying tribute to a premium car that’s finally on its way “out to pasture” as the much overused saying goes, but despite enjoying plenty of weeklong tests with the CT 200h over the years, it never imprinted on my heart like, say, Toyota’s FJ Cruiser, or even the automaker’s wonderfully practical and quite stylish Venza, or for that matter ultimately oddball Scion iQ (what can I say, I have a thing for pugs). Want to make me cry? Kill the Toyota 86. As for the Lexus CT 200h, even in F Sport trim, its final departure merely seems like the inevitable end of a so-so movie that’s honestly taken too long to wrap up. I, for one, just want to skip ahead to the part where Lexus introduces its next entry-level model. They really need to get it right this time. Fingers crossed…
©(Copyright Canadian Auto Press)
Car Shopping Tools