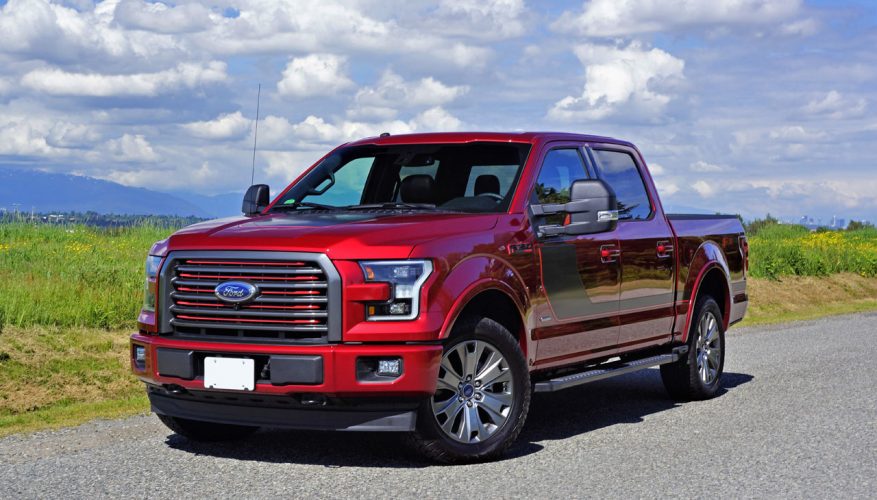 By: Trevor Hofmann
F-150 buyers love their special editions, and I must admit the new 2017 Lariat Special Edition upgrade added to my SuperCrew 3.5 Ecoboost 4×4 tester is something I could definitely fall for as well.

This thing looks fabulous! I can’t tell you how many rubbernecking stares I got while driving around town, and my neighbourhood is one of the rarer places to find pickup trucks, at least when it comes to those that live here. There are plenty of plain white work trucks with side signage scattered across the myriad building sites throughout my ever-burgeoning inner-city-like suburb, while the streets are literally littered with the bourgeois supercars of the nouveau ultra riche, from Ferrari, Lamborghini, Maserati, McLaren, and the like. Strangely, cars like that are commonplace, but a truck like this totally stands out.

Lariat sits third amongst seven trims on the F-150 hierarchy, the others being XL, XLT, King Ranch, Platinum, Raptor, and Limited. We really should consider the Raptor a completely unique model due to exclusive body panels and an extreme off-road specific driveline, but for the time being we’ll just leave it alone.

Back to the Lariat, while third-rung up the F-150 ladder, its $46,149 price tag is considerably higher than the XL’s $28,249 starting point, or the XLT’s $30,549 base window sticker. Then again the King Ranch starts at $63,349, which is well into premium-branded luxury mid-size SUV territory, and the Platinum delves even deeper into the luxe class with a sticker of $65,549. The Raptor, incidentally, starts at $68,399, while the end-all-to-be-all luxury trucks (or at least Ford would like to have us think of its F-150 Limited this way) is a highfalutin $73,149: ranch owners and contractor/developers only need apply, plus Walmart’s Sam Walton if he ever decides to sell off his 1979 F-150.

All of a sudden this Lariat is looking pretty approachable, even with its fancy additions. Upgrading to the four-door SuperCrew cab with the five-and-a-half-foot short box, the 3.5-litre Ecoboost V6, new 10-speed automatic (yes, a 10-speed, just like the bike my big brother got when I was relegated to a 5-speed) with auto start/stop, and four-wheel drive elevated that Lariat price to $58,249 (back up to mid-size luxury SUV territory again), while its Ruby Red paint adds another $450.

That black stripe down the side and its black hood decal are part of the Special Edition package mentioned a moment ago, as are the strips of red running across the otherwise grey-tone grille. There’s much more to this $2,400 package than that, mind you, such as LED headlamps with dark housings (my tester also had the Luxury package, so expect halogens in lesser equipped models), body-colour front and rear bumpers, unique 20-inch alloys on 275/55 all-terrain tires and a set of black running boards between them, unique red and black fender and tailgate “F-150” badges, and finally a unique squared off chrome tailpipe finisher on the outside. I think it looks pretty sharp. Agreed?

Inside, the F-150 Lariat Special Edition gets an exclusive red-stitched leather-wrapped steering wheel, red-stitched detailing on the unique instrument panel and doors, a red-stitched console top, and a very fine looking set of red-accented, leather and psuede-trimmed Special Edition seats, plus all of the features that come with the Lariat and the Luxury package noted a moment ago.

The latter is a $4,900 package that adds whollops of high-end features like those LED headlights that are actually comprised of very cool looking dual-stacking beams and infused with auto high beam technology, while the taillights are upgraded to LEDs as well. The package normally comes with 18-inch chromed wheels and a whole host of chromed exterior trim, all of which gets nixed for the Special Edition package above, but the normally chrome-capped side mirrors (black as-tested) benefit from power-folding capability, auto-dimming, LED side-mirror security approach lights, blindspot monitoring warning lights, and more, while rear cross-traffic alert is also part of the 502A Luxury upgrade.

We could leave it there, but you might notice the addition of the $1,250 Technology package in the photos, which ups the ante with a 360-degree parking monitor with a split-screen display and Dynamic Hitch Assist, plus lane keeping assist.

A $550 spray-in bedliner made the box much more serviceable, while Ford’s exclusive (and still brilliant) $400 Tailgate Step made getting in and out much easier (money well spent for the 50-plus crowd). Likewise for the $300 retractable Box Side Steps, and there were more extras added on, but I will leave it there.

The 3.5 Ecoboost is the stuff of modern-day legend, a V6 that hauls better than most V8s thanks to direct injection and turbocharging. It’s thoroughly updated for 2017, however, the changes including a redesigned block, new turbos, a revised cooling system utilizing a higher-rate water pump capable of pushing more coolant through modified flow paths, and lastly a new fuel-delivery system that uses both direct and port injectors for upping power and lowering emissions. The only carryover elements from the outgoing engine are the cylinder liners, the bore’s centre dimension and, of course, the overall 3.5-litre displacement.

The mechanics of the new transmission are impressive, with a total of six clutches and four planetary gear sets fitting within a new bellhousing that’s hardly larger or heavier than the six-speed unit it replaces. Its ratio spread is now slightly wider at 7.4, with the first cog a bit shorter and final drive a tad taller than the previous sixth gear.

The 3.5 Ecoboost has always been a strong performer and relatively light on fuel, but the new 10-speed allows it to stay in its sweet spot more often, whether that be to optimize performance by keeping the engine in its optimal rev range to accelerate quickly, or by shifting sooner and more often in order to maximize fuel economy. Either way it’s a bonus, resulting in great power off the line with zero letup as it courses through the gears up to highway speeds, and then superb passing performance when needing to make short work of a slower vehicle. The 10-speed is smooth too, with near imperceptible shifts, and the fuel-saving auto start/stop mode, which shuts the engine down when it would otherwise be idling, does its job without drama.

All of this was expected, but I didn’t plan on hearing one of the best exhaust notes ever emanating from a V6. I’m wondering if the powers that be in Dearborn hired the same sound engineers that piped ideal engine and exhaust notes through the Mustang’s audio system, because the 3.5 Ecoboost was too good to be true. Ford isn’t alone, with BMW doing likewise for its latest M models. I certainly wouldn’t put it past the blue oval bunch, and don’t think for a second that I’m complaining, as it sounds fabulous. At first I couldn’t help but wonder if there was a small block V8 ahead of the firewall, but the EcoBoost badges on each front door wouldn’t lie.

The F-150 Lariat Special Edition backs up this sportiest of engines with an agile chassis that noticeably benefits from the lightweight aluminum body shell overtop. I believe Ford now delivers the true sports truck of the half-ton class, and while its ride isn’t quite as smooth as the Ram 1500 or either of GM’s full-size pickups, it was never harsh. I’d say they’ve come up with a good balance of performance and comfort, and obviously the majority of truck buyers agree with this sentiment.

Yes, Ford is now arguably in the lead with engineering advancements, the various Ecoboost powertrains providing more engine tech than any rival, the new 10-speed automatic a full two steps ahead of all challengers in the forward gear count (including GM despite co-developing it with Ford, because they haven’t implemented it in a truck yet), and the lightweight aluminum body shell the truck’s ultimate fuel saving grace, the result being a claimed 12.7 L/100km in the city, 9.5 on the highway and 11.3 combined as-tested, which is mighty good. Of course, if you’re constantly pushing the 3.5’s power potential you won’t experience figures close to this, but if you go light on the throttle the new 10-speed will shift below 3,000 rpm more often than not, which is where the fuel savings occur.

This engine and transmission combination can allow for a payload of up to 1,460 kilos (3,220 lbs) and a maximum trailer weight of 5,534 kg (12,200 lbs), but these numbers can fluctuate depending on the cab, bed length, driveline and more.

So there you have it. The F-150 continues to be the most advanced pickup truck on the planet, leading the way in almost every respect. Will its tech leadership somehow shame Ram and GM owners into submission, so they’ll feel foolish to stay loyal to their brands when it comes time to trade in? Hardly. That’s like telling a Harley rider his bike isn’t as leading edge as the Honda cruiser parked next to him. It’s not going to matter. Truth is, there are plenty of personal reasons to like each brand’s half-ton. While there’s the issue of ownership pride, Ford ultimately understands that winning the fuel economy war improves fleet sales, because business buyers are less about loyalty and more about the bottom line.

As consumers we win either way, because what’s good for the fleet buyer is great for us individually. We get more performance out of a lighter, sportier truck that’s easier on gas. That it happens to look this good is simply a bonus.
©(Copyright Canadian Auto Press)
Car Shopping Tools