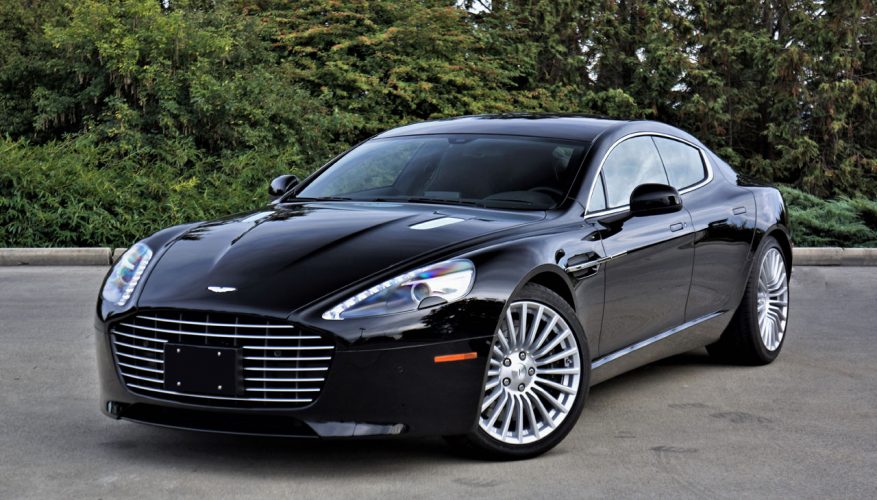 By: Trevor Hofmann
I’m going to miss the sound of internal combustion. Truly, as fascinating as the world’s obsession with automotive electrification is, and as amazingly powerful as some EVs are, the Aston Martin sponsored Red Bull Racing F1 car and the two companies’ forthcoming Valkyrie supercar even incorporating hybrid drivetrains, nothing gets a car enthusiast’s adrenaline racing faster than a raspy V12 at peak revs.

The Rapide S’ 6.0-litre V12 is especially sonorous, although its more Roger Taylor’s I’m In Love With My Car than Freddie’s Bicycle Race. The sound is exhilarating, but everything else about this four-door sport coupe is completely over the top, so having a soundtrack to match is only fitting.

Just look at it. From one end to the other the Rapide is as long, low and lean as four-doors get. The augmented grille came as part of its 2014 redesign. It’s a bolder take on a classic Aston theme, with more luxury car presence than the narrower split design from the original, whereas the rear deck lid was reshaped to aid aesthetics as well as aerodynamics. New front and rear fascias improved aero as well, while also lending more visual edge. A-M made a few changes inside too, but the most notable upgrades improved performance.

The original Rapide’s V12 made a not insignificant 470 horsepower and 443 lb-ft of torque resulting in a 5.3-second sprint from standstill to 100km/h and a top speed of 303 km/h (188.5 mph), but this was nevertheless bumped up to a much more satisfying 550 horsepower and 457 pound-feet of torque as part of the just noted update, which also saw an “S” tagged onto the Rapide nameplate. The improved engine reduced the dash from zero to 100km/h by 0.4 seconds to 4.9, while elevating its terminal velocity by 3 km/h (1.5 mph) to 306 km/h (190 mph). Aston made one major change for 2015, the replacement of the outdated six-speed automatic with an in-house massaged version of ZF’s highly touted eight-speed unit, which along with a nominal output increase of 2 horsepower and slightly more important addition of 8 additional lb-ft of torque resulted in a new 4.4-second charge from zero to 100km/h and a much more exotic top speed of 327 km/h (203 mph).

At least as important, the new model made big gains in drivability thanks to smoother overall operation from the new Touchtronic III transmission, plus much quicker 130-millisecond shift intervals, and the addition of Normal, Sport and Track driving modes, whereas the engine management system now came from parts supplier Bosch, the suspension bushings were 20-percent stiffer, the brakes grew in size, and the list goes on.

Last year’s updates were all about the interior. Like this 2017 model, nothing notable was changed outside or below the skin, but the cabin received a completely new centre stack design. Its row of carryover circular gear selector buttons up top and big billet aluminum knobs just below should make repeat customers feel right at home while dazzling newcomers not yet familiar with such high levels of authenticity, but the replacement of the previous car’s myriad tiny buttons with four sets of organically shaped touch-sensitive interfaces will cause some getting used to. Anyone who’s used a smartphone should feel mostly at home, at least when it comes to tapping the black glassy surfaces to select functions, and most should appreciate the modernized, minimalist look.

Of note, the new centre stack was first applied to the Vanquish, and other than the entirely redesigned DB11’s interior is now brand-wide. Likewise, Aston’s much improved AMi III infotainment display continues to power upwards from the dash top upon startup, resulting in an amply sized 6.5-inch screen with wonderfully crisp, clear resolution and bright, colourful graphics. It takes care of the usual functions, from providing a very helpful backup camera with active guidelines to allowing route guidance from a particularly accurate Garmin-supplied navigation system, while it can also read and respond to text messages. My favourite feature is a set of horsepower and torque meters found within the vehicle settings interface, which show real-time engine output graphics and data, not that I’d be able to concentrate on them when extracting the most from the powertrain. Likewise I didn’t spend a lot of time enjoying the excellent stock audio system due to the aforementioned mechanical soundtrack, although I’d be tempted to upgrade to the optional Bang & Olufsen system just the same.

For those unfamiliar, V12s produce the best audio. Don’t get me wrong, as I love the rough and rumble growl of a well-toned American V8 and thrill at the sound of an overstressed inline-four or six getting wound out for all its worth, but they don’t come close to a sporting V12 at full song. I’ve driven plenty on offer, and must admit to enjoying the guttural throatiness of a Lamborghini almost as much as the higher pitched Ferrari’s shriek, but still there’s nothing quite like the calculated cacophony emanating from ahead of a V12-powered Aston’s firewall. As for the seat of the pants experience, this Rapide S delivers like no other four-door.

With so much torque available, takeoff from standstill is always short and very sweet, while each pull on the rightmost leather and metal finished paddle comes across as if the injected fuel is some sort of epinephrine shot to the heart. Achieving its claimed sprint times isn’t difficult, but take note that Aston bucks the current all-wheel drive trend by powering the rear wheels only, so respect must be taken if planning to unleash traction and stability controls. Likewise, the Rapide’s mostly epoxy resin bonded aluminum underpinnings make for a relatively lightweight 1,990-kilo (4,387-lb) curb weight considering all the luxury onboard, but the added length that works wonders when stretching highway legs makes the management of fast-paced hairpin corners more challenging than with the DB9 it was based on. This makes sense of course, the Rapide a wholly different car despite its similarity underneath, yet when compared to other four-door coupes it’s a much more visceral experience and completely unique.

Where the Rapide S is smoother and more refined than its two-door chassis donor is in the transmission, its Sport mode providing even greater response yet never harshness. The steering system and adaptive suspension combination is impressive too, its sharp sporting edge always ready for quick reaction yet still protective from the types of potentially jarring pavement imperfections that can cross paths during daily driving.

I certainly could get used to time well spent in the Rapide S, but I’d never tire of its gorgeous mechanical gauge cluster. Its idiosyncratic counterclockwise tachometer could only be stranger if it bounced up and down like the antique set of Smiths dials that always left me questioning highway speeds in an old ’60s era classic I once owned, but I loved that old car as much as I appreciate the pure spirit of this Rapide S.

I recently mused about a similarly analogue set of gauges in another exotic coupe, questioning if one day we’ll be stepping up to pay considerably more for mechanical dials like we now do for sophisticated wristwatch complications, despite quartz being more reliable, durable and precise. Fully configurable colour TFT displays are new and exciting so apparently we all want them, similarly to how most of us were willing to pay more for new-tech quartz and digital watches when they debuted in the late ’60s and continued to gain acceptance throughout the ’70s, but mark my words there will come a time when we’ll long for mechanical automotive components again too, like this fabulous gauge cluster and the sensational V12 that powers this formidable beast of a road car.

There’s so much else to love about the Rapide S. The beautifully stitched leatherwork inside is otherworldly, the quality of all materials is beyond most anything else in its class, the attention to handcrafted detail is even better than some others in this ultra-premium sector, the supportive comfort from the front seats is ideal, and its rear passenger compartment is as wonderfully crafted as up front, albeit not nearly as accommodating.

Someone of my five-foot-eight stature or slightly taller shouldn’t have a problem climbing in or getting comfortable, but it was never meant to replace your S-Class Pullman. Hence the reasoning behind a more fully proportioned Lagonda sport-luxury sedan, destined to replace the Rapide within a couple of years. Until that car arrives, consider the Rapide S an ultra-cool way to pick the kids up from school, even allowing longer cargo placed alongside when one of the rear seatbacks is lowered. Aston provides a flip-up luggage divider in back too, while the quality of cargo area finishings won’t disappoint.

Speaking of future product, I referenced Red Bull’s F1 team earlier due to the two organizations’ collaborative work on the Valkyrie supercar, but less is known of Aston’s all-electric RapidE. It was originally a concept developed in conjunction with an even more legendary F1 team’s engineering division, Williams, with full-scale production planned for right about now. Unfortunately the production partner, China’s LeEco, pulled out due to financial problems resulting from its work with floundering EV car builder Faraday Future, so instead Williams will help produce a small 155-unit run arriving in 2019. This should coincide with the launch of Aston’s upcoming DBX crossover SUV and aforementioned Lagonda. We’ll have to wait to see if an EV version of the Lagonda materializes later, but this only makes sense being that some of Aston Martin’s most important markets are planning to eradicate internal combustion engines in coming years.

Such steps are arguably important for the greenification of the world, but the thought of never hearing this V12’s song again are just too sad to contemplate. I’d recommend you put one of these into your road-going collection before it’s too late. This particular car’s $278,625 asking price includes everything but taxes, which will no doubt seem very fair after a few minutes behind the wheel. Nothing else with four doors feels quite as exotic, and few cars are as exclusive.
©(Copyright Canadian Auto Press)
Car Shopping Tools