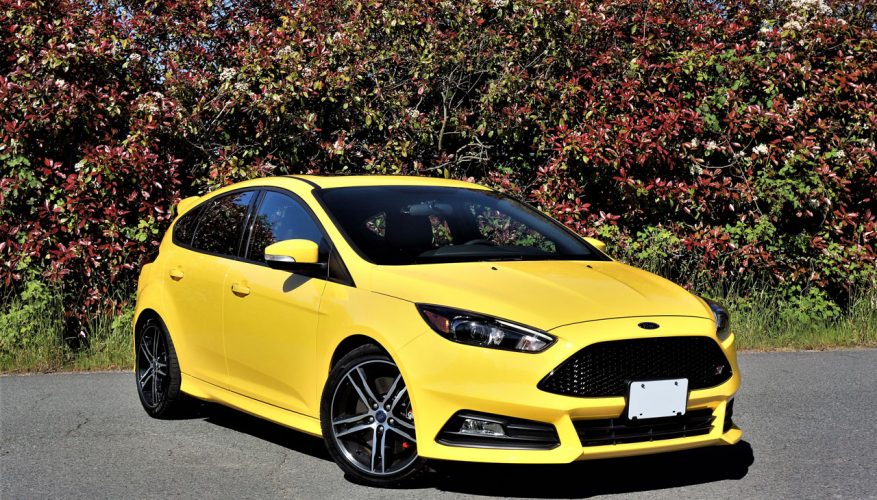 By: Trevor Hofmann
You don’t need to spend a lot of money to own a serious performance car. Volkswagen GTI and Honda Civic Si fans have known this for years, while more recently the same can be said of blue oval aficionados.

I’m not talking the cult of Mustang, but rather those who bow to the initials “ST”. The original Focus ST dates back to the model’s first-generation when it became Ford’s VW GTI killer in 2005, but like so many fabulous cars offered in other markets it was never brought across the Atlantic to play in our sandbox. Sure we had the 2002–2004 SVT Focus with a significant 170 horsepower, but that was still 52 ponies shy of the KKK-Warner turbocharged Euro version, whereas the ST variant of the Focus ZX4 built from 2005–2007 hardly deserves mention due to just 151 horsepower.

We’d have to wait six years after ex-Boeing CEO Alan Mulally took the reigns in Dearborn for his “One Ford” strategy to be more fully implemented before the 2013 Focus ST made its U.S. and Canadian debuts, followed quickly by the equally entertaining 2014 Fiesta ST (ironically the year Mulally was ousted).

Forget for a moment that both small Fords are some of the most outdated models in their respective classes, or maybe I should call them two of the oldest models in their subcompact and compact car segments, because despite being in our market for five and four years apiece they’re still more advanced than many of their peers.

It’s just that they’re up against a phenomenally good new Honda Civic (that now comes in four body styles as well as a duo of new high performance Si models and an ultra-aggressive Type R), a much-improved Hyundai Elantra (in sedan and GT hatchback body styles plus impressive new Sport trim), a better-than-ever Toyota Corolla (now with the impressive Scion iM joining its ranks), while most others in the class have been redesigned more recently.

Nevertheless, one glance at the 2017 Focus ST ¬(or its insanely powerful Focus RS sibling-another previously Euro-only model introduced here last year, but available since 2002 in Europe) and you probably won’t care, as it looks fabulous, comes stuffed full of two of the best Recaro sport seats in the entire compact class, and scoots like someone lit its tail on fire.

I half expect to see flames spewing from its tailpipes between shifts when one burns up the street in my import-tuner and supercar dominated neighbourhood, and yes the Focus ST should be considered an import despite wearing a decidedly domestic badge, due to the cooperative group of global Ford performance divisions that dreamed up the idea, incubated it, brought it into the world, kept it on life support when bean counters wanted it killed, and resuscitated it for this current generation. Let’s hope it remains, along with the aforementioned RS, to top off the next-gen Focus, that’s expected sometime next year.

Why do I love the Focus ST? Let’s start with some cold, hard facts: 252 horsepower, 270 lb-ft of torque, a 2.0-litre turbocharged, direct-injected Ecoboost I-4, a short-throw six-speed manual gearbox, a unique lightweight fully independent sport suspension design, featherweight 18-inch alloys on low profile summer performance tires, and a 1,462-kilo (3,223-lb) curb weight. Does that sound like something that’s got what it takes to get a move on? Totally.

Strap yourself into its deeply sculpted leather Recaro sport seats, grab hold of its leather-wrapped flat-bottomed sport steering wheel, give a firm tug on its carbon-fibre trimmed parking brake lever, take hold of its carbon-fibre and leather-clad shift knob, find your footing on its ideally placed aluminum pedals, glance over at its trio of ancillary mini-gauges with turbo boost pressure atop the dash (just for fun), and don’t forget to select your favourite tunes on the 10-speaker Sony audio system. You’re now ready to rhumba, and believe me, it may not be the 350 horsepower Focus RS, but time well spent with a Focus ST won’t be forgotten anytime soon.

This thing is so much fun it should be illegal. Come to think of it, extracting all of its fun on city streets and highways is. You’ll be past posted speeds and into handcuffs and tow-away territory quicker than you can say, “I’m sorry officer, I didn’t realize how fast I was going,” with hands atop its bright yellow roof and legs spread apart on the pavement below. It’s best suited to weekend autocross courses or track days, where it has the ability to clean up on most of its Asian challengers.

As the saying goes, power is nothing without control, and the Focus ST’s 235/40R18 Goodyear Eagle F1 performance rubber and nicely sorted front strut and rear control blade sport suspension deliver up gobs of grip. Turn in is crisp with plenty of legible feedback, and torque steer is nominal unless trying to burn rubber with the steering pegged to either side-not recommended so a moot point. It’s better at high-speed, where it’ll sling itself through a slalom course with expert skill, trail-brake around an acute angle with unflappable finesse, power slide through off-camber corners with predictable ease, and then stop in its tracks just like that.

If you’re wondering where a humble mainstream volume manufacturer like Ford found the engineering knowhow to create such a superb little hatchback, initiate the learning curve by researching “Ford motorsport history”. I can’t think of an automaker that’s competed in more auto racing categories and classes for as long as Ford, and that experience especially rubs off on its small cars.

I love that something so impressive can be purchased for just $33,698 plus freight and fees. It’s a superb value when put up against other hot hatches, plus it’s not exactly all go and no show either. Its unique front grille and fascia, extended rocker panels, larger rear rooftop spoiler, and redesigned rear bumper cap with exclusive centre-mounted chromed tailpipes totally set the Focus ST apart, while other standard exterior features include auto on/off LED signature enhanced HID headlamps, black bezeled fog lights, heated power-adjustable side mirrors with integrated turn signals, and more.

Proximity-sensing keyless access gets you inside while pushbutton start gets the little turbo-four percolating, the Focus ST receiving most of the items previously mentioned as standard equipment, as well as the nicer soft touch interior panels of the Focus Titanium, plus metal “ST” branded scuff plates, ambient lighting, one-touch up/down powered windows all-round, a 4.2-inch high-resolution colour TFT multi-information display, cruise control, variable intermittent wipers, a heated steering wheel rim, heatable front seats, an eight-way powered driver’s seat, leather upholstery, an overhead console, a powered moonroof, and dual-zone auto climate control, while the carbon-fibre trim mentioned earlier can also be found on the door grab handle inserts and the bezel surrounding the dash-top mini gauges. In other words, you get a lot more for your $33k than just go-fast goodness.

My tester was fully loaded, which meant navigation with detailed mapping added $800, the machine-finished alloys with black painted pockets were an additional $600, and that eye-searing Triple Yellow paint increased the bottom line by $550, the total options coming to $1,950.

You can gather from my enthusiasm I had a particularly good test week. I’ve driven a number of these little rockets on road and track over the years, and loved each and every moment behind the wheel. That it’s also comfortable, roomy for up to five passengers and cargo, decent on gas at a claimed 10.5 L/100km city, 7.8 highway and 9.3 combined, and safe with a five-star NHTSA crash test rating, makes it a good choice for those who want to combine a ton of fun with their need for practicality.
©(Copyright Canadian Auto Press)
Car Shopping Tools