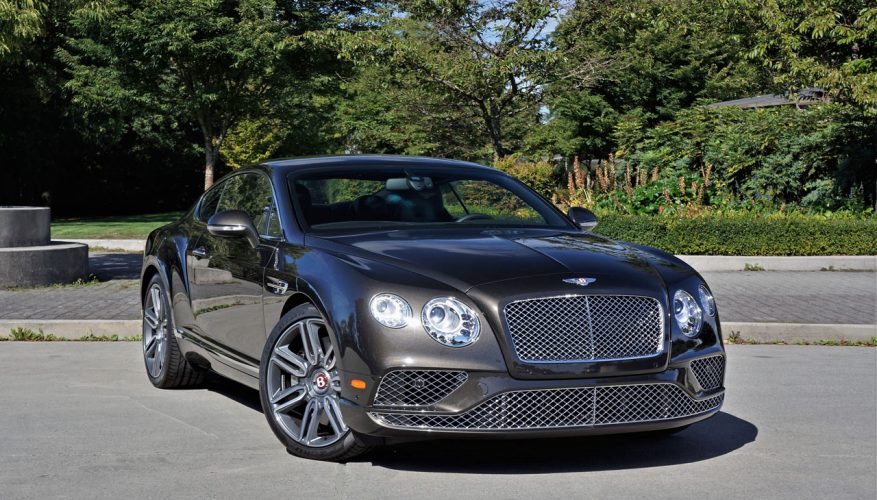 By: Trevor Hofmann
Go ahead. Don’t be shy. Nobody’s watching. Indulge yourself, even for a moment. After all, it’s just a car. But what a car! Feast your eyes upon one of the most beautiful luxury sporty coupes to come along this millennium.

I know. Bentley’s Continental GT is nothing new. In my part of the country you’re bound to see one drive by daily, yet I never tire of its lines. Its 2011 redesign refined the curvaceous theme, and the 2016 update added fresh new elements, although in both cases Crewe made sure not to mess with the formula that’s allowed this car unprecedented success.

Personal time well spent with two-door Bentley hardtops began before the modern-day Continental GT transformed the entire ultra-luxury sector in 2004, yet the thought of getting behind the wheel of yet another reignites the senses. Bentley calls the bronzy grey-brown metallic coating this particular Continental GT V8, Spectre. It’s stunning. The closer you get the more dazzling it becomes. There’s a three-dimensional visual depth to the clearcoat’s finish that’s mesmerizing, yet take a few steps back and it comes across as tastefully understated. I suppose that describes the Continental GT line on the whole.

This much chrome mesh on another car might be overkill, but it’s picture-perfect with the GT. And those lights-the circling LEDs-fabulous day or night. Muscular curves are everywhere, as are delicate metal brightwork details like the B-shaped front fender vents, wraparound rear bumper moulding, discrete taillight surrounds, and figure-of-eight tailpipe finishers, all part of the noted refresh. This car’s twinned seven-spoke 21-inch alloys are slightly larger than the standard 20s, their elegantly sporting look ideally underpinning the British marque’s storied mix of ultimate luxury and motorsport-honed performance.

They’re shod in ZR-rated 273/35 Pirelli P Zeros after all, hardly a poseur’s tire. Neither is the Continental GT’s 275/40ZR20 base set. Likewise, below that long, shapely hood is the model’s base engine, a twin-turbocharged 4.0-litre V8 sending 500 horsepower and 487 lb-ft of torque down to all four wheels through a quick-shifting ZF-sourced eight-speed automatic with manual mode and grippy knurled metal steering column-mounted paddles.

The lofty numbers make it sound like a handful, but nothing could be further from the truth. Around town and on the freeway the Continental GT V8 is pure ease and comfort, the fury inside only coaxed out when provoked. It doesn’t take much provocation, mind you. Select Sport mode, nudge the knurled metal shifter to manual, kick down on the rightmost drilled-stainless pedal and voila, instant gratification.

The V8 growl is real, but its exuberance hushed. The GT’s 2,300-kilo curb weight felt, but considerably less so than you might think. By the time you’ve read this sentence you’re at, wait for it… 100km/h, unless you’re a slow reader. Yes, I timed that on my stopwatch so it would take exactly five seconds. Crazy attention to detail? Probably. But nothing less would do justice to this car.

With a track unavailable no timed laps were possible this time around, something I’ve enjoyed in previous GTs. Despite its heft the big Bentley is shockingly capable at speed, those big shoes mentioned earlier only part of the handling equation. An important part for sure, but no one’s going anywhere fast without its wonderfully weighted variable assist rack and pinion steering setup, or its pneumatically sprung double-wishbone front and multi-link rear suspension, the latter adjustable via buttons on the lower console. Firm it up to get more from smooth racecourse-like pavement or take some of the edge off to manage the rougher stuff found on mountainside switchbacks or backcountry two-laners, it’s all done and dusted at the wheel of a GT.

Few cars deliver so much driver control, or more precisely few cars allow their driver to feel so completely in control while actually saving them from themselves. I don’t mean to offend, but most of us aren’t Seb Morris or Rick Parfitt Jr., Bentley Continental GT3 drivers and recent British GT Championship winners, or for that matter Guy Smith, Oliver Jarvis or Steven Kane who just won the Blancpain GT Series Endurance Cup. This said the GT is as close to unflappable as cars get, allowing its driver to extract as much of his or her skill as possible before bringing everyone home safely, its level of mechanical and electronic stability astounding. I’d attempt feats of courage in this brawny two-door never considered in a sports car half its size-the GT has never let me down. It’s a thrill-a-minute ride for those who don’t have time to invest in an F1 super license, a car that’ll take you to the edge and bring you back safely every time, within reason.

Of course, it can’t deliver the raw sensation of exposed aluminum framework, uncarpeted floorboards, hardly padded seats, and chainsaw-through-metal engine revs found in something purely visceral like a Lotus Elise, but you can always pick up one of those, or better yet, a Lotus 7 for weekend autocross stints. The GT is for getting back and forth to the office, and weekends away.

Believe me, you’ll be comfortable. Even if three’s a crowd the GT is a lot more accommodating than most personal coupes. I took opportunity to sit behind the driver’s seat after positioning it for my five-foot-eight frame and found plenty of knee and legroom, plus ample space over my head. At 358 litres the trunk is sizeable enough too, and finished nicer than most premium cars’ passenger compartments.

Of course, not much on today’s market comes close to the Continental GT’s cabin, especially when fitted with Mulliner interior trim. Plush leather is almost everywhere. Some is perforated and quilted in a gorgeous diamond pattern, while sporty white contrast stitching highlights key areas, the embroidered emblems on the headrests especially nice.

The perforations allow for ventilated cooling up front, this option joined by standard heatable cushions, while both driver and front passenger can enjoy the benefit of optional massaging seats as well. Additional options in this car include spectacular matte carbon inlays around the primary instruments, ahead of the front passenger, down the centre stack, on top and on the backside of the lower console, plus directly above on the overhead console. The metals are exquisitely finished, some bits satin silver, others chromed with yet more knurling, and all seeming as if milled from billet aluminum.

The white on black analogue metres in the primary gauge cluster are lovely, rimmed in metal with the space between filled by colour TFT technology. Seeing these makes me wonder when we’ll all get bored with fully configurable gauge clusters and want to go back to purer mechanical dials. By then it’ll be a luxury we’ll be forced to pay more for, similar to choosing a much pricier handmade mechanical wristwatch over a more accurate quartz, or personal wearable from Apple or Samsung.

And yes, the ode to horology overtop the infotainment touchscreen is from famed Swiss watchmaker turned automotive clockmaker Breitling. It’s no Navitimer, but it nevertheless shows off a pretty little black-faced dial that looks closest to their entry-level Colt Skyracer, or possibly a 2001 Aerospace Reference E75362-although then it would need to incorporate a couple of digital lap counters. Not a bad idea, Bentley.

The display below includes standard navigation, while its rearview camera, assisted by front and rear parking sensors, was especially helpful. As you might expect there were many more standard and optional features included in this luxurious two-door, such as an electromechanical parking brake, a heatable multifunction steering wheel, dual-zone auto climate control, tire pressure monitoring with real-time readouts, and much, much more, all adding up to $312,545 excluding taxes.

This said you don’t buy a Bentley to show off its features to your friends at the club. Let’s face it. You can do that with a top-line Kia. The Continental GT is about much more than that. It’s about beauty. It’s about engineering. It’s about painstakingly detailed handcrafted perfection. No… take that back. It’s more about appreciating the purposeful imperfections that only occur when building something by hand. You achieve that when a car’s sheetmetal isn’t solely welded together by robots and its interior not formed from extruded plastic. Instead, it becomes a Continental GT when truly skilled artisans choose the highest quality leathers individually and fit them by hand, when others pick out planks of hardwood to mirror match for grain and colour before applying stains, resins and buffing to a flawless sheen, and yet more well trained workers machine complex patterns into buttons, knobs and toggles from specially forged alloys. That’s Bentley, and that’s why their cars are worth more.

I’ll always appreciate this era of Continental GT, even when Bentley replaces it with an entirely new model next year. This car represents a dozen-plus years of refinement, and trust me they’ve got it spot on. If you’ve never owned a Bentley, you must imbibe. If you already have, you certainly don’t need my invitation or any motivation to get another. Life is short. Enjoy it fully.
©(Copyright Canadian Auto Press)
Car Shopping Tools