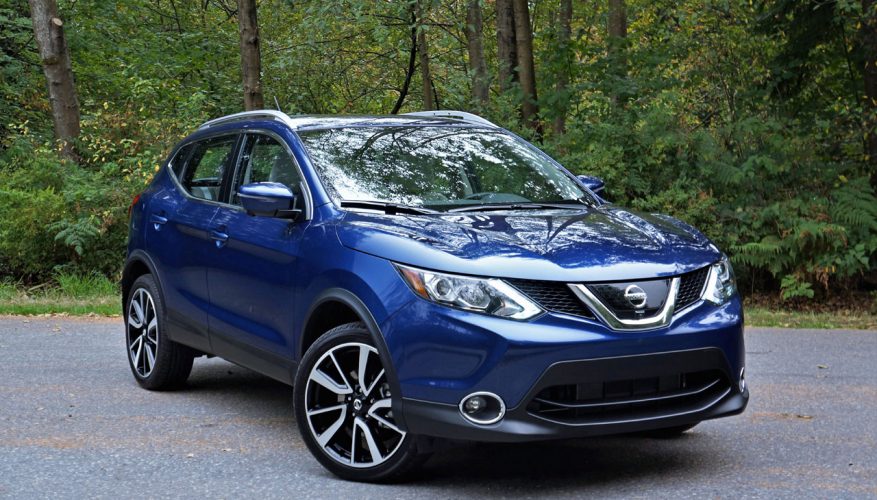 By: Trevor Hofmann
Let me stick my neck out and make a prediction. Nissan’s new Qashqai will consistently be the best-selling subcompact SUV per month before this year comes to an end, and when next year wraps up it’ll be number one in the class. I know that’s a bold forecast and my credibility is at risk, but at nearly 20 years in this business I’m getting better at choosing winners.

Here’s why I think so. First, Nissan’s SUV lineup is on a roll. From the Armada, Murano and Pathfinder all the way down to the Rogue, sales are strong and in most cases gaining on competitors. Next and most importantly, the Qashqai targets the core crossover SUV market where most people shop. What do I mean? It looks good, not weird. It’s sized perfectly, not too big and not too small. And it’s priced right.

Numbers are objective and unbiased, but styling is personal. Nissan pushed our aesthetic buttons when introducing its Cube and Juke in 2009 and 2010, the former successful elsewhere but canceled here in its fifth year after dismal sales. The Juke has fared well in comparison, never a segment leader but certainly respectable. This said both SUVs would fall into the noted weird category, whereas this new Qashqai incorporates already popular design cues from the larger Rogue and Pathfinder. In other words, it’s only strange by name.

It’s pronounced cash-kai, by the way, but I’ve got a feeling the Japanese brand will soon be calling it cash cow. It looks long, sleek and stylish, with Nissan’s V-motion grille front and centre, lots of muscular body sculpting across the hood and down each side, just enough matte black cladding around the bottom to give it that go anywhere SUV look, plus tasteful splashes of chrome for premium appeal.

My tester’s Platinum package was responsible for the LED headlamps while its SL trim went a bit further by adding satin-silver roof rails up top and a sharp looking set of machine-finished 19-inch alloys with black-painted pockets below, whereas the chrome bezeled fog lamps were pulled up from mid-range SV trim. I love the rich Caspian Blue paint, although I’ve already seen the Qashqai in Nitro Lime, Monarch Orange and Pearl White, each adding its own unique character, with other colour options being Palatial Ruby, Gun Metallic grey and Magnetic Black. All paints add $135 to the bottom line, except the pearlcoat that increases the Qashqai’s price by $300.

Lastly, my tester’s SL trim starts at $29,498 and, along with everything already mentioned, includes a larger 7.0-inch touchscreen display that splits the screen for a rearview camera with dynamic guidelines on one side and an Around View parking monitor with moving object detection on the other, plus navigation, voice recognition, NissanConnect mobile Apps and services, SiriusXM Traffic and Travel Link, while SL trim also includes a six-way powered driver’s seat with two-way powered lumbar support, leather upholstery, and more.

Additionally, opting for SL trim allows for an upgrade to the $2,700 SL Platinum package that not only features the LED headlights mentioned earlier, but also Nissan Intelligent Safety Shield technologies including auto high beams, adaptive cruise control, NissanConnect services, autonomous emergency braking with pedestrian detection, blindspot warning with rear cross-traffic alert, plus lane departure warning and prevention. The Rogue with the same features earned the best-possible IIHS Top Safety Pick + rating for 2017, so I expect the Qashqai to do likewise once it’s fully tested. So far so good, with the IIHS giving it top “Good” crashworthiness marks for its small overlap front, moderate overlap front, and side tests.

Two features I’ve yet to mention include Nissan’s Xtronic continuously variable transmission (CVT) and its Intelligent all-wheel drive, the former optional with base S trim and standard with the SV and SL, whereas AWD is optional with S and SV trims yet standard on the SL. All Qashqais include a 16-valve, DOHC, 2.0-litre four-cylinder engine good for 141 horsepower and 147 lb-ft of torque, with the added benefit of direct fuel injection and continuously variable valve timing on both the intake and exhaust valves. The result was more than enough power at take-off via a smooth, linear CVT delivery system, plus ample grip on slippery surfaces.

Likewise the Qashqai’s ride was equally smooth, this brought about by a fully independent suspension comprised of struts up front and a multi-link design in back, combined with stabilizer bars at both ends. Nissan enhances this with a standard technology it calls Active Ride Control, which simultaneously uses subtly applied power from the engine and equally unnoticeable braking force to iron out the types of bumps and dips that would otherwise cause annoying fore and aft pitching.

The Qashqai isn’t all about comfort, mind you, the advanced suspension also taking to curves well thanks to an electric power steering system that features a standard Sport mode, while also included across the line is Intelligent Trace Control that actively applies braking to each wheel to minimize understeer (when the front tires brake traction and push outward) and oversteer (when the rear tires lose traction and slide sideways), or in other words it keeps the SUV ideally balanced and in its chosen lane even when pushed hard. This aids confidence, but of course every technology has a limit. Fortunately, the Qashqai provides plenty of notice when pushed too hard, and when its overcooked dynamics tell you it’s time to get off the power it settles down nicely.

It can even use Intelligent Engine Braking to do so, standard with SV and SL trims, which adds small amounts of engine resistance to assist the standard four-wheel discs, smoothing out the process and reducing brake wear, although for panic situations the regular binders are joined by the usual anti-lock, emergency brake-force distribution and brake assist technologies.

While everything said so far might have already piqued your curiosity, I’ve actually saved the best for last. The Qashqai’s big surprise is what you’ll find inside. Granted, my tester was a top-line SL and some surface treatments and features are higher end than the other two trims, but I still wasn’t prepared for this near-premium Nissan. First off it was doused in Light Grey leather, but to me it looked more cream than grey. Either way it added a richness that made me feel like I was living the Infiniti lifestyle, rather than slumming it in the ‘burbs.

Nissan doesn’t just cover the leather seats in light grey, but rather the lower half of the dash and door panels, plus the centre console, and I’m not just talking the usual subcompact grade hard shell plastic, but stitched and padded leatherette in places I didn’t expect, like each side of the centre stack and even next to the inside knee where a hard surface might otherwise chafe away at exposed summer skin uncomfortably. Nissan uses a dark Charcoal shade for the top of the dash, door uppers, etcetera, with much of the surfacing up front comprised of nice soft synthetics.

The leather seats are comfortable and feature particularly attractive stitching around their bolsters and perforated inserts, while the seat heaters work well, although I prefer three-way instead of just “HI” and “LO”. There were no such niceties in the rear quarters, but the outboard positions are easy on the back and spacious enough for large adults. Really, with the driver’s seat set for my five-foot-eight medium-build frame I still had about five inches left ahead of my knees and another four above my head, which makes it good for someone well over six feet. There’s easily enough room side-to-side for two as well, or three in a pinch, my left shoulder and hips approximately three to four inches away from the door.

I’ve already gone over cargo space in detail, but I should mention Nissan’s innovative Divide-N-Hide cargo system, which provides a possible 18 adjustable variations between the passenger and stowage compartments, including “out-of-sight storage” and a “lower deck” to manage taller cargo.

I could go on and on, but I’ve said enough. The rest is really up to you. So let me summarize. I won’t go so far as to say the new Qashqai is the best SUV in the subcompact segment, because no single vehicle can fulfill each and every person’s specific needs or tastes, but as mentioned earlier I believe it targets the core of the mainstream volume-branded subcompact SUV segment and therefore will be very successful. Personally, I think you’re going to vote it number one with your wallets. Let’s look back in a few months and see if I’m right. Until then, I recommend you try one on for size. The new Nissan Qashqai is totally worth your time and attention.
©(Copyright Canadian Auto Press)
Car Shopping Tools