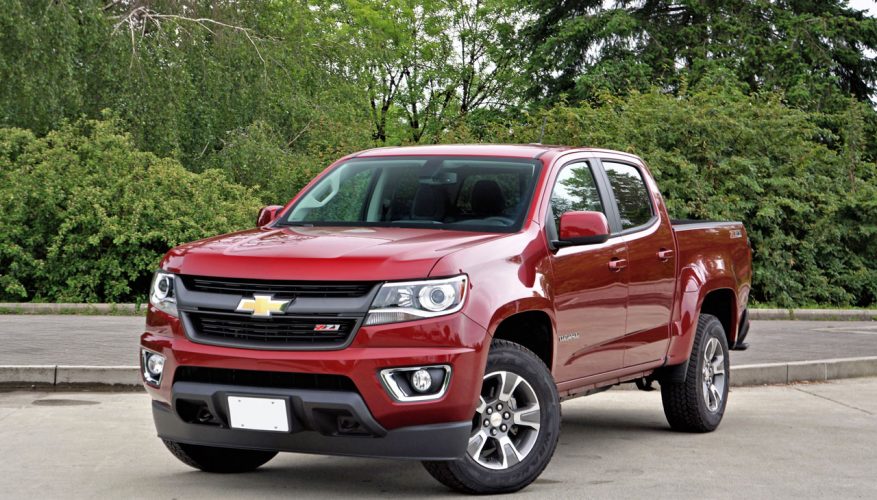 By: Trevor Hofmann
I’m officially on the bandwagon. OK, more specifically I’m standing on the cargo bed of General Motors’ superb new Chevy Colorado because its segment-exclusive CornerStep bumper makes it so easy to climb up to. Seriously though, this mid-size truck and its GMC Canyon counterpart are now best in class by a large margin.

They’ve got styling, performance, efficiency, interior design and execution, infotainment excellence, and yes those brilliant rear bumper steps going for them. And I haven’t even mentioned the all-new 2.8-litre Duramax turbo-diesel yet.

Behind my 2017 Chevy Colorado Z71 Crew Cab 4WD tester’s smiling grille is GM’s 3.6-litre DOHC, direct-injection V6 with a variable intake manifold and variable valve timing making 308 horsepower at 6,800 rpm and 275 lb-ft of torque at 4,000 rpm, which is three horsepower and six lb-ft of torque more than last year. Suffice to say it moves along quickly enough, but it’s also quite efficient due in part to cylinder deactivation that temporarily cuts fuel to three of its cylinders when coasting or otherwise not required, and auto start/stop that shuts the engine down entirely when it would otherwise be idling, both new to this V6.

My gasoline-powered tester’s advanced mode-selectable eight-speed automatic transmission with manual shift capability has much to do with its efficiency, this having the most forward speeds of any pickup truck in the class, plus when the Trailering Package is added it now includes a standard trailer brake controller (previously only available with the diesel), helping it achieve up to 3,175 kilos (7,000 lbs) of trailering weight as tested, whereas the diesel 4×4 can pull even more, its rating capped at 3,447 kg (7,600 lbs). Also notable, GM’s AutoTrac automatic four-wheel drive system is now standard fare with the V6, the old system requiring users to manually select 2WD, 4WD Hi or 4WD Lo.

Strangely, of all the potential variations of cab size (there are three), bed length (there are two), engines (there are three), transmissions (there are two), drivelines (two again), and trim levels (there are many), all of the Colorados loaned to me over the past three years have been almost identical in configuration. The first two Z71 Crew Cab Short Box V6 4WD models were even the same Red Hot colour, while this latest 2017 model is trimmed out nearly the same once again other than its new for 2017 Cajun Red Tintcoat paintjob, although even that’s another shade of red (Graphite grey is also new for 2017, while Laser Blue and Orange Burst were late additions to the 2016 model).

Even their interiors have been the same, with carbon copy black and grey, leatherette and cloth upholstery. They’ve all been very nice too, but how about some variety GM? I’d like to try a base Work Truck (WT) with the 2.5-litre four, or even the popular mid-range LT. I recently spent a week in the new top-line diesel-powered ZR2, Chevy’s mid-size answer to Ford’s full-size off-road racing replica Raptor, and will soon write down my experience in a road and trail test, so stay tuned.

The diesel was new last year, by the way, with this latest 2017 model having some additions of its own. These include the aforementioned nudge upward in V6 performance, plus a new larger 7.0-inch infotainment touchscreen incorporating an updated Chevrolet MyLink interface featuring wonderfully colourful Apple-like graphics in stock form as well as the ability to connect your iOS and Google-powered smartphones to Apple CarPlay and Android Auto respectively. It’s optional on the base WT and standard with mid-range LT trim and above.

My tester received the same impressive 8.0-inch Chevrolet MyLink infotainment system as last year’s version, complete with the previously mentioned features in the 7.0-inch system as well as Bluetooth streaming audio, voice activation, satellite radio, four USB ports, and more. This is a cut above most competitors in design, functionality, and features, giving GM a solid advantage in a technology crazed car market.

That 2017 Colorado Z71 Crew Cab Short Box 4WD starts at $38,545 plus freight and fees, but was outfitted with yet more gear as-tested including the Cajun paint at $595, cargo area lamps at $310, and quad of cargo tie-down rings at $125, pushing the total price up to $39,575. This truck for less than $40k seems like a bargain, although you’ve really got to drive one to more fully appreciate it.

The Colorado provides a better ride than average, a trait I find true of all GM trucks. Nevertheless it handles well for this class, while my tester’s off-road ability should be more than adequate for most owners’ requirements. To be transparent I didn’t take this one off pavement, but I’ve done so with previous Colorados, most recently the ZR2, and while the Z71 won’t be able to keep up to this segment’s ultimate 4×4, it shouldn’t get left far behind either.

I think more owners will appreciate the Z71 suspension’s on-road benefits, where it’s slightly stiffer settings allow for better road holding. Still, I must stress, its ride quality is excellent for the class, the truck’s long wheelbase especially enjoyable when lopping off high-speed miles on the highway. I drove it around town all week too, and only had a few issues with smaller parking spots on tightly confined lots. This can usually be remedied by parking outside farther from shopping mall entrances or searching for a roadside parallel spot on the corner, but such problems won’t be out of the ordinary for the majority of seasoned pickup truck owners buying into this class. Of course, visibility is superb no matter the angle, this model’s raised 4×4 stance making sure of that.

The formidable V6 is a great match to the new eight-speed automatic, with strong pull off the line and wonderfully crisp shifts despite being set up to maximize fuel economy first and foremost. I personally appreciate the inclusion of auto start/stop as I like things as quiet as possible while parked at stoplights, unless of course I’m behind the wheel of something truly sporting. In a truck, however, I’d rather pollute less and drive past more refueling stations, which is what this advanced drivetrain is mostly about.

GM is clearly leading in the powertrain department, this transmission and the aforementioned turbo-diesel a one-two punch at the head and solar plexus of Toyota’s Tacoma. Not too long ago the Japanese truck dominated the segment, but since the General has come back in such a big way it’s now a Pacquiao vs. Mayweather standoff (or should I say runaround). Either way, the two are neck and neck in the Canadian market.

After just losing out to the GM twins last year, Toyota’s Tacoma was just a single unit ahead of the GM twins over the first five months of 2017, but momentum shifted to the Colorado and Canyon in June, helping the domestic duo close Q2 of this year out at 6,375 deliveries compared to just 6,314 for the Tacoma. Being that Toyota lost by just 34 units in 2016, these final months should make for an epic showroom battle.

Either way, GM Canada should be plenty proud. The Colorado and Canyon are so good they’ve managed to gain incredible ground against the once totally dominant Toyota since arriving back on the scene in 2014. The Canadian team should pat themselves on the back even harder for whipping their U.S. counterparts, the two GM trucks significantly behind the Tacoma south of the border. This likely has as much to do with the popularity of the larger full-size truck market where the Silverado and Sierra hold a significantly more substantial second place behind Ford’s F-Series, but either way GM is winning with its lineup of light trucks.

In the smaller mid-size segment this Colorado is more than just a contender. Along with its GMC Canyon companion it’s my newfound favourite. Its advanced automatic transmission, optional diesel engine, and those fabulous rear bumper steps make it my number one choice in this segment, which has me crossing my fingers that Toyota updates its Tacoma soon so this ongoing title fight stays close. Competition has clearly bred a much better truck so far.
©(Copyright Canadian Auto Press)
Car Shopping Tools