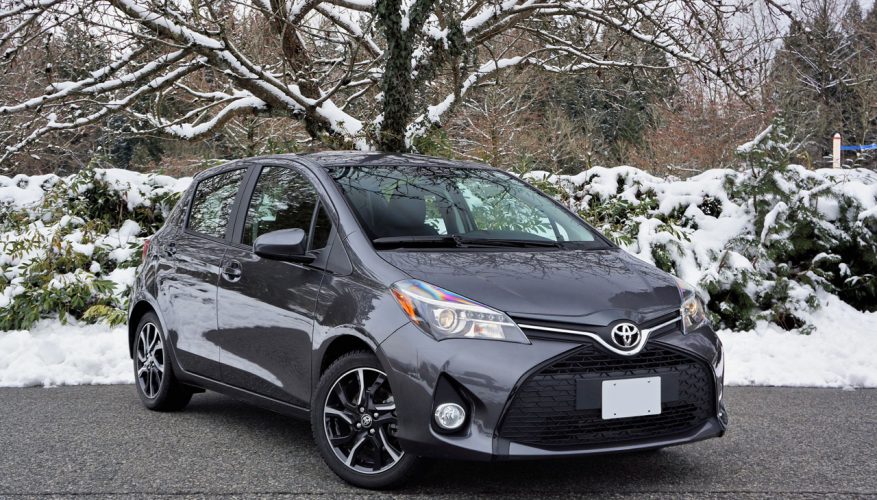 By: Trevor Hofmann
I have no idea why I still call this little car the Tercel. I worked for a Toyota dealer way back in ’87 and the Tercel was one of the most popular cars we sold at the time.

That was already the third-generation Tercel, which was replaced by the Echo in 1999. This oddly styled yet undeniably practical subcompact was one of my first-ever manufacturer-supplied weeklong test cars (thank you F. David Stone) when I entered the professional journalist fray in 2000, and one I’d still love to get my hands on in five-speed manual Hatchback RS guise. I first drove that little number at a press launch in Niagara, Ontario during the fall of 2003, but it was another such launch program in autumn of 2005 that saw a redesigned version of the same car debut, and with it the odd yet catchy Yaris name.

Interestingly, the Echo was actually a rebadged Yaris, but most of us don’t pay attention to European nameplates here in North America. I didn’t even realize both cars were also shared with the Vitz, Platz and Vios in Asian markets, the latter four-door sedan one of my regular rides when taxiing around my second home of greater Manila (there are millions of these things throughout the Philippines).

I had already experienced just how much fun the Yaris was to drive with that aforementioned Echo Hatch RS, but it was during the second launch event that I first autocrossed one. The car has only improved over time, although I must say this latest version isn’t as capable of sneaking past the constabulary as it once was.

At least this top-line Yaris SE looks a lot subtler in Magnetic Grey Metallic than Absolutely Red, or even more jaw-dropping Ruby Flare Pearl with Black Sand pillars and rooftop, the latter two hues making the car’s massive black maw pull eyeballs as if one of Gazoo Racing’s WRC rally cars was nonchalantly passing by (ok, that race-only car has a lot more white in its livery, but you get my point).

I only wish Toyota had shaved $1,000 off my tester’s bottom line by forgoing the rather pedestrian four-speed automatic, as the much more engaging standard five-speed manual is a lot more in keeping with the Yaris SE’s hot hatch styling.

Yes, the Yaris is one of the only cars still sold in North America with a four-speed autobox, most of its peers having graduated up to five- or six-speed automatics, or alternatively gravitated over to a continuously variable transmission. Some have even adopted the much more fun to drive dual-clutch automated sequential gearbox, but to its credit this beyond well proven four-speed is ruggedly dependable. The Yaris’ automatic doesn’t even include a sequential manual mode, but rather a gated shifter that lets you manually select all of its lower gears-I suppose that’s better than nothing. I love that Toyota raises the excitement bar by calling it a four-speed “Super ECT with Overdrive,” as if its SLAM overdrive-equipped Class 0.5 jerry-rigged Isu-Sim SSP05 hyperdrive-enhanced Girodyne SRB42 sublight engines can whisk the little YT-1300 to 1,050 km/h in atmosphere or 3,000 G in space-sorry, Toyota’s ridiculously silly marketing-speak had me babbling Millennium Falcon jargon for a moment.

Before you start thinking that I’m ripping too hard on this cheap little hatch (it’s less than $20k as tested after all), appreciate that this four-speed auto drives significantly better than many newer CVTs. I don’t know why CVTs get such a bad rap, other than their thoroughly unsporting rubbery feel and the way they make the engine rev in lazy arcs or drone incessantly on the highway, but I prefer this archaic four-speed, and what’s more and the Yaris’ as-tested fuel economy rating of 7.9 L/100km city, 6.8 highway and 7.4 combined is hardly gluttonous, and not much off the base five-speed manual model’s claimed rating of 7.8 city, 6.5 highway and 7.2 combined.

Another reason the Yaris is as reliable as its Echo, Tercel, and Starlet predecessors is its sole 106-horsepower 1.5-litre four-cylinder engine, which puts down more excitement to the front wheels than its numbers suggest. Let’s not forget the little modern-day Toyopet is a mere 1,050 kilos (2,335 lbs) soaking wet, and that’s with the autobox and this SE’s extra equipment (it’s 1,030 kg/2,315 lbs in base CE trim), which means that its 103 lb-ft of torque is more than enough for spinning front tires at takeoff and skedaddling it down the road. Still, as light as it is this 2017 model is some 86 kilograms (254 lbs) heavier than the 944-kg (2,081-lb) Echo Hatch that actually benefited from two additional lb-ft of torque, the current Yaris’ midriff bulge due to 13 years of growth, safety features, and amenities added.

Of course, the Yaris also comes standard with the usual active and passive safety gear like ABS-enhanced four-wheel disc brakes (the SE is upgraded over the usual rear drums) with electronic brake-force distribution and brake assist, traction and stability control, all the usual airbags including one for the driver’s knees, etcetera.

My tester was pretty well loaded, although a person could spend extra for paint, the aforementioned two-tone colours costing an extra $540. The cargo liner in back was an add-on too, this from the accessories catalogue at a mere $90 and change. Ask nicely and your dealer might even throw in all-season floor mats, these only setting them back $165, while a cargo net is just over $130. You can get a block heater for just under $210, and the usual paint protection, hood deflector, and body side mouldings too, but the coolest dealer-added accessories include the $465 Bongiovi Acoustics DPS radio upgrade that really improves audio quality, and the (rather pricey) $1,123 navigation system that adds detailed mapping and real-time routing to the stock display, plus SMS text message/email read and reply, “one shot” voice commands, “Playmore Like This” and Gracenotes apps, plus more.

The Yaris will soon be updated with an even more aggressive look for 2018, so if you like what you see you may want to grab a 2017 while you can. It might be lagging behind a bit mechanically, at least with respect to its two transmissions, but the Yaris is diehard dependable, and that’s what most buying into this class want first and foremost. Truly, it’s hard not to recommend this car for reliable daily transport, while this SE version is both fun to drive and pretty snazzy to look at.
©(Copyright Canadian Auto Press)
Car Shopping Tools