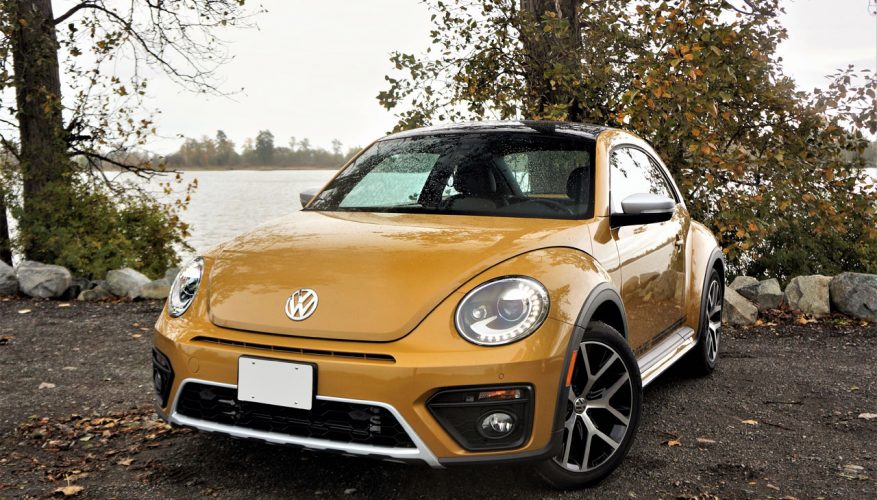 By: Trevor Hofmann
The unorthodox Dune hit the market last year and caused quite a stir amongst the VW Beetle faithful. I’m not talking about those who adhere to the wonderful little air-cooled rear-engine “Bug” that put Volkswagen on the global map more than half a century ago, but more so those weaned on the modern-day front-engine, front-drive version that wowed the world as the Concept One when it landed on VW’s Detroit auto show stage in 1994 and eventually arrived as the New Beetle in 1997.

It was thoroughly and effectively redesigned in 2010 for the 2011 model year, the “New” internally named A4 version then old, resulting in the simpler “Beetle” nameplate getting the nod for this A5-based third-generation. It remains less frou-frou and therefore appeals to brawnier types, which has inevitably led to some very eye-catching special editions.

The best of these, in my opinion, is the Classic that arrived for 2015, which now seems to be a permanent fixture within the Beetle lineup, whereas the crossover-styled Dune is on its second year with a convertible version added for 2017, so it appears this wonderfully unusual new addition will become a perennial regular too.

The Dune does a pretty good job of toughening up the Beetle’s less than masculine image, as shown here at its photo shoot location next to a local river about five kilometers from my home. The gritty dirt underneath and natural background seems fitting, this being the “dune buggy” of the family, although the new Golf Alltrack is probably the more capable compact VW to take up and over unpaved hills.

The expected SUV-like matte black plastic cladding is tastefully applied as a lower body wraparound, adding a little more beef around the wheel cutouts, while VW also spiffed up the design with aluminum-look grille trim and undertrays front and rear. A 10-mm raised “Rough road” suspension adds to the crossover look too, allowing more room for a decidedly non-4×4-like set of 18-inch machine-finished Canyon alloys, while wider front and rear tracks plus a thicker 23-mm front stabilizer bar make sure that any additional top-heaviness is offset by some newfound stability and extra rigidity in the suspension.

Exclusive Sandstorm Yellow Metallic paint (it’s also available in Deep Black Pearl and Pure White) gets carried over to the dash and door uppers inside, where it’s joined by Curry Yellow piping and stitching on the otherwise black leatherette bolstered seats with Dark Ceramique grey cloth inserts (no matter the exterior colour chosen), while the Curry Yellow stitching is also found on the leather-wrapped steering wheel, shifter boot, handbrake handle, and centre armrest.

Front-wheel motivation comes via VW’s turbocharged and direct-injected 1.8-litre four-cylinder that’s capable of a brisk 170 horsepower and equally enthusiastic 184 lb-ft of torque, while partially due to its six-speed auto with Tiptronic manual mode it’s rated at an impressive 9.7 L/100km in the city and 7.2 on the highway.

While it looks like an off-road warrior the Dune isn’t available with 4Motion all-wheel drive, but its electronic traction and stability control, amongst other driving aids, reportedly help it go farther into the wilderness than most would think possible, but unfortunately I wasn’t able to go bushwhacking during my weeklong test.

Instead I enjoyed the new Beetle Dune on the streets and highways that run through and around my fair city, not to mention some nice country roads that wind along the same serpentine river used for the backdrop in the aforementioned photos. That’s about as close to a beach as we came to despite how naturally the Dune would’ve looked with sand under its treads, the cool and cloudy weather during our test week not cooperating with any such plans.

Still, the circuitous two-lane riverside road was ideal for throwing the agile Beetle Dune around, the quirky looking two-door hatch handling well despite being quite tall. Its bulbous wheel arches are spaced wider than the upper portion of the car appears, allowing for a lot of real estate between the tires and therefore excellent grip through fast-paced the corners. The Beetle Dune tracks well on the highway too, although sudden wind gusts can knock it around a bit.

Getting up to speed is easy thanks to the previously noted powertrain, with torque aplenty found low down in the rev range allowing for effortless acceleration, while its gearbox doles out shifts quickly, without commotion. It’s actually quite smooth, although it’s optimized for fuel economy before performance and therefore likes to shift sooner than some might like. Shift lever actuated manual mode allows a modicum of control, the Beetle Dune generally as fun to drive as most VWs.

Of course, as life would have it the majority of time behind the wheel was spent in traffic, where the Beetle Dune’s impressive interior came to light. All of the body-colour surfaces and mustard hued detailing helped create a happy atmosphere even in the thickest quagmires of daily commutes, the same sporty leather-wrapped flat-bottom steering wheel that provided such decisive directional duty during aggressive manoeuvres now delightfully filled with some of the highest quality switchgear in the mainstream sector.

This is nothing new for Volkswagen, its steering wheels some of the best in the industry, this one blinged up with piano black lacquered spokes that almost had me forgetting about the rudimentary monochromatic trip computer imbedded within the otherwise fabulously fun-loving curry-coloured gauge cluster.

Where the blocky “dot matrix” inspired graphics in this simpleton multi-information display are about as modern as the original Beetle’s shape, the infotainment touchscreen overtop the centre stack is as new and up-to-date as anything in the industry, even including proximity-sensing digital buttons that pop up from the bottom when fingers get near. Its navigation system provided superbly detailed graphics and very accurate routing too, while the backup camera delivered a clear view of the road behind. VW even included rear parking sensors to make sure all that gorgeous gold paint stays scratch free, while Endless Summer sounded great on the Fender audio system.

The Beetle Dune’s seats are as comfortable as they’re attractive, with easy manual operation that included plenty of up and down adjustability as well as a lever for providing additional lower back soothing lumbar support. The Beetle’s tall roofline made access to the back easier than expected, while the rear seats were also more comfortable than I initially thought they would be. That roof height provides adequate headroom for smaller to medium-sized adults, although really tall teens might feel a bit cramped.

Similarly, all Beetle models require a little more compromise than their Golf siblings when it comes to cargo capacity, but the Dune was still quite accommodating thanks to 436 litres (15.4 cubic feet) behind the 50/50-split seatbacks and 846 litres (29.9 cubic feet) when folded flat. Or at least mostly flat, the load floor interrupted with a slight hump where the rear portion of the cargo floor meets up with the lowered seatbacks, but it should be sizeable enough for most owners’ needs.

In other words, the new Beetle Dune provides ample practicality with its big dose of funky style. That’s a tradeoff many are willing to make, but then again its relative popularity may not be enough to save it from the axe once 2018 comes to a close. Internet chatter (some from reliable sources) is predicting the iconic models’ demise next year, which probably makes financial sense despite being a downright shame. VW would be better served by a subcompact SUV now that the Tiguan has grown up in size, while word has it the long-rumoured Microbus is in the pipeline for 2022 production, electrified no less.

Therefore, if you like this special edition Dune or any other Beetle model you’d better grab one while you can.
©(Copyright Canadian Auto Press)
Car Shopping Tools