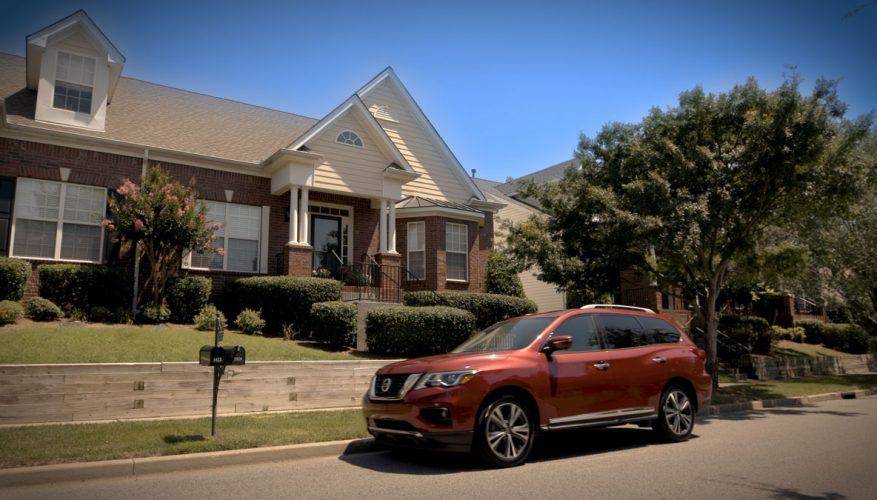 Heartbreaking news of children and animals left to suffer in the back seats of cars during sweltering summer heat might eventually become history if Nissan has its way, much thanks to an innovative new technology that gently reminds drivers of someone or something that may have been left in the back seat, or if they’re still not paying attention, multiple honks from the horn once out of the car with the door closed.

Nissan’s “Rear Door Alert” (RDA), which will be exclusive to all 2018 Pathfinder trims when it debuts this fall, starts monitoring the rear door switches as soon as the SUV is unlocked, and if a back door has been opened and then closed again it banks the “memory” for later when the driver arrives at a destination and shuts off the engine.

When parking the 2018 Pathfinder, a reminder will pop up on the primary instrument cluster telling the driver not to forget whatever was previously placed in the back seat. If these subtle prompts are ignored, by the SUV’s rear doors not being reopened after the driver’s door has been closed, the Pathfinder’s horn will deliver a series of short, distinctive chirps to get the driver’s attention.

“The idea is if you open a rear door, whether to put a child or a package in the rear seat, the vehicle will help alert you when you get to your destination that you may want to check the rear seat,” said Marlene Mendoza, who together with fellow Nissan engineer Elsa Foley came up with the idea. “We’ve built in enough time that you don’t have to rush, but if you don’t open the rear door again when you get out of the vehicle, we want to think for a moment about what you may have put in the back seat.”

In the event you don’t have children, aging parents/grandparents, pets, or anyone/anything else that shouldn’t be left behind, it’s possible to override the RDA completely or merely limit the reminders to the instrument cluster alone. After all, it’s best to keep a low profile if you just went shopping and don’t want to alert any would-be burglars that something valuable is in the back of your vehicle, or simply would rather leave your groceries, briefcase, gym bag or what-have-you in back while doing something else. Then again, even if you’re childless you still might appreciate having the system’s built-in memory ready and waiting as a backup.

“We pushed each other along and knew we were on the right track one morning when Marlene discovered she had left a pan of lasagna in the back seat of her car one night after coming home after a long day at the office,” said Foley. “The worst thing was the car smelled for days, but it made me ask myself, “what if that had been something else back there?’”

The concept of automaker employees turning real-life experiences into potentially lifesaving innovation is certainly refreshing, and something that Nissan is said to foster in its global corporate culture.

“There’s a culture of innovation along with the Nissan Intelligent Mobility mission that really encourages employees around the world to seek out new ideas every day,” added Mendoza, who is also a mother of three. “We’re thankful that we were able to use our perspective as moms, and our backgrounds as engineers, to bring forward an idea that is now going into production — providing drivers with a reminder to check their back seats.”

While the Rear Door Alert is new to Nissan, General Motors introduced something similar called “Rear Seat Reminder” with the 2017 GMC Acadia last year, and is already rolling out the system on other models this year. This said Nissan’s RDA should be even more effective than GM’s, because the Acadia gives no warning once its driver has left the vehicle.

Concerned citizens can only hope Nissan and GM either license their technologies or other automakers follow suit shortly, because the problem of children and animals dying from heat stroke in the back of hot cars doesn’t seem to be abating, despite the continued news stories surrounding the subject.

Back in August of this year, the U.S. National Highway Traffic Safety Administration (NHTSA) hosted a public awareness event on the dangers of heat stroke for children left in hot vehicles, stating the number of child heat stroke deaths in the U.S. increased by 63 percent from 2015 to 2016—no similar data was available for Canada.

As of July 31, 2017, both NoHeatStroke.org and KidsAndCars.org claimed that 29 children had died from the same problem year-to-date in the U.S., while the average number of children suffering a similar fate has been 37 since specifically recording heat stroke deaths in vehicles began in 1998. What’s more, 54 percent of those children were left behind by caregivers who completely forgot they were there, which makes both General Motors’ and Nissan’s rear seat alert systems all the more critical.

“The Rear Door Alert uses a similar honking cue that has been proven successful with Nissan’s Easy Fill Tire Alert,” added Foley, who is also a mother of two children. “By drawing your attention back to the vehicle once you’ve walked away, you are more likely to recheck the back seat than with a visual alert alone.”

While the Rear Door Alert will be standard equipment on the 2018 Pathfinder, Nissan plans to add it to other models across its lineup as quickly as possible.