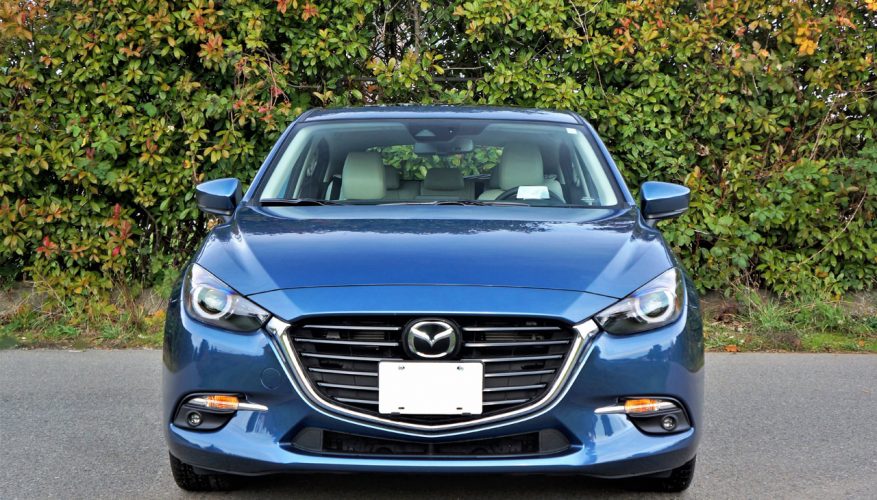 By: Trevor Hofmann
Mazda has a much stronger following in Canada than the U.S. We tend to like smaller, sportier, fuel-efficient cars and SUVs, while our American friends traditionally purchase their vehicles one size larger.

Yet that doesn’t explain stronger sales of the Toyota Corolla family, Honda Civic, Nissan Sentra, Hyundai Elantra/Veloster, Volkswagen Jetta/Golf/GTI, Chevrolet Cruze, Ford Focus, Subaru Impreza/WRX, and Kia Forte last year. The salt gets further rubbed into the wound when learning the only two direct competitors it outsells in the U.S., the Dodge Dart and Mitsubishi Lancer, have already been officially discontinued. Yikes!

By comparison, the Mazda3 may not be rivaling the Civic for top sales anymore, or for that matter rubbing shoulders with the Corolla and Elantra, but it’s still ahead of the others. Therefore Mazda Canada should probably feel pretty good about the job they’re doing here, or cry in their coffee cups about the poor results their American counterparts are experiencing. After all, reduced U.S. sales probably means lower profits that can cause less advertising that no longer bleeds into the Canadian market, which helps sell Canadian cars, and so the vicious cycle downwardly spirals.

I think the Mazda3 deserves better in both countries, but the success of any car has as much to do with the massive marketing spend of the industry’s big players, as the quality of goods and value for money. Mazda has long made excellent products that perform better than average and deliver a near-premium look and feel, yet they’re a relatively small independent Japanese brand that doesn’t have the advertising clout of Toyota, Honda, Nissan, the big domestic brands or the Koreans. This reality hurts Mazda’s growth prospects, but also kind of helps them indirectly.

Fans of this alternative import carmaker tend to like Mazda’s more exclusive cachet, especially those who appreciate better than average driving dynamics. I happen to like Mazda’s styling more than most other brands as well, while its interiors are second-to-none within the categories it competes in.

Take this Mazda3 Sport GT. Its deep, wide, chrome-trimmed grille with blackened slats has a totally unique presence on the road, its top corners visually melding into this model’s projection LED headlamp clusters, while its sporty yet clean lower fascia incorporates tasteful splashes of chrome, LED driving lights, and the tiniest of LED fog lamps.

The rest of the bodywork flows gracefully from front to back, the car perfectly proportioned despite its compact dimensions, while its backside is finished off with a discrete body-colour rooftop spoiler, elegantly simple LED taillights, and a matte black diffuser-style bumper cap with integrated dual chromed tailpipes at each side. It’s one great looking ride from all angles.

Inside it’s downright premium, especially in my tester’s two-tone black and “Pure White” motif. The dash top, much of the instrument panel, and the door uppers are surfaced in high-quality soft touch synthetic, whereas the door inserts and armrests are finished in padded and stitched leatherette, and the seats get covered in optional perforated leather.

A semi-digital colour TFT primary instrument display is laid out in a sporty motorcycle centre-pod design, while an available class-exclusive head-up display powers up from the dash top to project critical info where it’s easiest to see without taking eyes from the road. At centre, a 7.0-inch fixed tablet-style infotainment display could be straight out of an Audi, BMW or Mercedes, and just like these premium marques it’s controlled with a knurled metal rotating dial on the lower console. Another metal-trimmed dial allows volume control, while an electromechanical parking brake joins an aluminized Drive Selection rocker switch featuring “SPORT” mode next to the leather-clad/satin-silver aluminum adorned shift lever.

The stylish metallic treatment enhances other areas in the car as well, including the steering wheel that’s also leather-wrapped and filled with high-quality, well damped, tight fitting switchgear, this at least as good as the buttons, knobs and switches on the centre stack that include a nicely sorted dual-zone auto HVAC interface in GT trim.

I almost forgot to mention my favourite steering wheel appendages, a set of paddles for swapping gears. The Sport GT comes standard with a six-speed manual, as do the base GX and mid-range GL, but the GT is the only trim to get paddle-shifters when upgrading to the six-speed automatic.

These make a big difference when it comes to drive engagement, and are especially appreciated when factoring in the GT’s more potent 2.5-litre direct-injection, DOHC, 16-valve four-cylinder engine, which makes 184 horsepower and 185 lb-ft of torque instead of 155 and 150 respectively for the base 2.0-litre four. The larger engine moves off the line with plenty of gusto, and the autobox swaps gears with equal enthusiasm. This isn’t the most advanced transmission on the market when it comes to gear count, but it’s well proven and should therefore be reliable, while incorporating plenty of Mazda’s low-friction Skyactiv technologies to help minimize mechanical drag.

Backing up the GT’s straight-line performance is the same fully independent suspension that underpins the rest of the Mazda3 lineup, which includes MacPherson struts up front and a multi-link setup in back, with stabilizer bars at each end, while new for 2017 G-Vectoring Control (GVC) optimizes handling by momentarily retarding engine output when vehicle weight transfers from front to back upon turning the wheels, which shifts weight back towards the front wheels for added traction. This is similar to how racing drivers “load” the front wheels by subtly tapping the brakes before a corner, giving them a performance advantage, but this automated system goes about its processes completely unnoticed.

The result is handling prowess that’s even more entertaining than previous iterations, which means the Mazda3 is now more arguably best-in-class for driving dynamics, at least until moving into the ultra-hot sport compact category filled with cars like the Ford Focus RS and ST, VW Golf R, Subaru WRX STI, and sadly now cancelled Mitsubishi EVO X (RIP). Some might remember the Mazdaspeed3 that would have previously been numbered amongst these super-compacts, but alas but alas like the EVO it lives no more. Today’s Mazda3 GT is left to carry the torch, so to speak, and it does so by delivering superb performance at a less dramatic pace and price, the latter figure about half that of those upper-crust competitors.

On top of this my tester is upgraded further with a $1,350 Technology package that boasts adaptive cornering headlights, satellite radio, a HomeLink universal garage door opener, traffic sign recognition, active air shutters to reduce drag and help safe fuel, and Mazda’s i-ELOOP regenerative braking system that first harnesses kinetic energy when slowing or braking and then repurposes it into the electrical system for yet more energy savings.

So equipped the Mazda3 GT achieves a claimed 8.7 L/100km city and 6.6 highway, which is considerably better than the regular GT automatic that’s rated at 9.0 and 6.7 respectively-the GT manual gets an estimated 9.6 city and 7.0 highway. Those that prioritize fuel economy over performance can opt for a more basic Mazda3, which gets a claimed 8.4 L/100km city and 6.4 highway rating for the auto or 8.6 and 6.4 with the manual and starts at just under $16k.

It appears Mazda has all bases covered with its updated 3, a car I can’t help but recommend. Even if superb driving dynamics aren’t key on your priority list, although handling prowess should be as an accident avoided is the most effective safety measure taken, you’ll be hard pressed to find a more attractive, nicer finished, better made, safer small car than the Mazda3 Sport GT.
©(Copyright Canadian Auto Press)
Car Shopping Tools