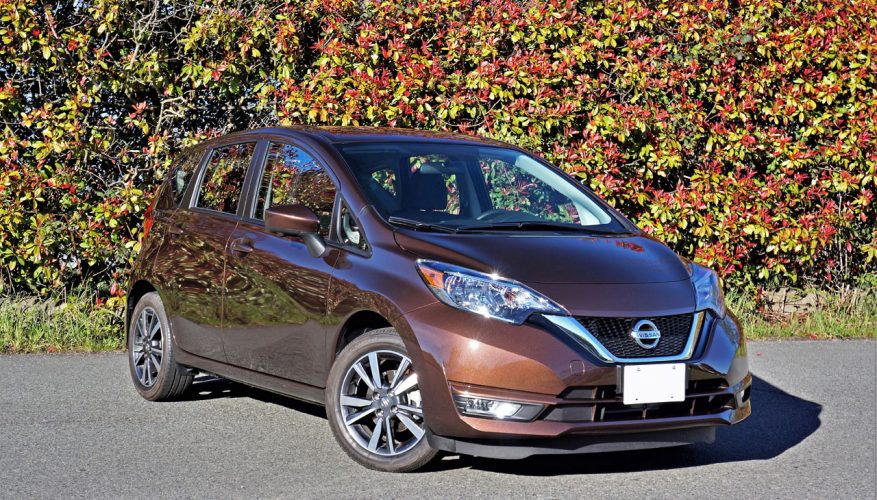 By: Trevor Hofmann
Living with an entry-level economy car doesn’t have to be a boring or uncomfortable experience, and Nissan’s Versa Note is especially good at dealing with the latter issue.

Along with the tiny Micra city car, plus the Juke and new Qashqai SUVs, the Versa Note is in charge of attracting newcomers and fixed income earners to the automaker, its very approachable $14,498 base price one of its more agreeable attributes. For that you get a nifty looking little runabout that’s better made than many in the subcompact class.

It’s motivated by a 1.6-litre four-cylinder engine producing a rambunctious 109 horsepower and 107 lb-ft of torque, yet its claimed fuel economy is even more smile-inducing at 7.5 L/100km in the city and 6.0 on the highway when hooked up to its optional as-tested CVT.

A five-speed manual transmission comes standard in base S and second-rung SV trims, as well as this top-line SL, whereas the CVT is optional in all three of these and standard in the “sportier” SR, which sits between the SV and SL in the Versa Note trim hierarchy. Just why Nissan decided a CVT would endear performance fans to a sport model is anyone’s guess, so let’s just say the SR’s sporting prowess is limited to styling plus wheels and tires.

You’d be forgiven for thinking my tester’s slick looking new machine-finished 16-inch alloys on 195/55HR16 all-seasons were part of the sportier package, but these are unique to the top-tier SL, some of its other features including fog lamps, heatable powered side mirrors, proximity-sensing keyless access with pushbutton ignition, a larger 5.8-inch colour infotainment touchscreen (up from 5.0 inches) with navigation and a 360-degree Around View parking camera, voice recognition, satellite radio, SiriusXM Traffic and TravelLink, plus more.

Of course the 2017 Versa Note SL is priced higher than the base S, but it’s still less than $20k at $19,748, and can only be pushed higher by adding dealer-installed accessories like a $329 body-colour rear rooftop spoiler, $100 chromed door handles, a $49 chrome exhaust tip, $151 illuminated metal treadplates, and plenty more, the only extra I’d add being a $329 auto-dimming rearview mirror with an integrated Homelink garage door opener.

The aforementioned grille isn’t the only new item on the 2017 Versa Note’s update list, other modifications including the front bumper and lower front fascia, plus the rear bumper that now features last year’s sportier SR styling across the entire range. The SL isn’t the only one to get new wheels either, with new 15-inch alloys for the SV and new covers for the base model’s 15-inch steel wheels. Those looking to stand out from the crowd will appreciate new Monarch Orange paint too, whereas Deep Blue Pearl makes the little hatch look richer and my tester’s Cocoa Embers adding a retro ’70s cool factor.

On that note, the new blue hue will add $300 to the Versa Note’s bottom line, as will carryover Aspen White, whereas the groovy orange and brown colours only add $135 like the other metallics offered, Super Black being the only standard colour available. Other than the feature adjustments already noted, the only notable changes inside are larger cupholders across the line and a second 12-volt power outlet on all but the base model.

While all of this kit makes the updated 2017 Versa Note more appealing, its key differentiator is the comfort quotient I spoke of earlier. The seats are some of the best in the subcompact class, with thick, deeply padded cushions that are also wide enough for all body types. Likewise the Versa Note has a very tall roofline, making it ideal for larger folk.

No matter your size the Versa Note sits you up high like in a small SUV, allowing great visibility all around, and the dials within the primary gauge cluster are massive and beautifully detailed with nice electroluminescent backlit markers, making them easy to see no matter the light outside. The infotainment touchscreen I mentioned earlier is easy to use and the audio system has pretty decent sound quality.

Kudos to Nissan for all the satin-silver metallic trim around the cabin too, this joining piano black lacquered surfaces to bling things up nicely. The switchgear is good for the class as well, the three main dials used for the HVAC interface especially big so as to be useful while wearing winter gloves. The two-way seat heaters are set between the front seats on the lower console, and warm up quickly, although during my summer test I hardly wanted to test them out for long.

Speaking of seats, the Versa Note SL’s upholstery is particularly attractive. It’s a black and royal blue weave that I’ve seen in a number of other Nissan products over the years and quite like. I find the company goes a step further than most of its peers when it comes to lower end seat fabrics, which is an attribute I’m particularly fond of.

I mentioned the Versa Note provides plenty of room up front, but neglected to tell you about rear seat accommodations. After setting the driver’s seat so my five-foot-eight medium-build frame fit in ideally, I sat directly behind and found more room than many high-end luxury sedans. Seriously, I had between seven and eight inches in front of my knees plus loads of space for my feet. I could even stretch out my legs a bit, with my feet well underneath the front seat, while I still had five to six inches above my head. There’s also plenty of room from side to side for two passengers, although if you plan on putting three in back I’d recommend choosing smaller folk. Nissan provides a nice large flip-down armrest in the middle for those times when three’s a crowd, and its height is ideally positioned for comfort while two cupholders are integrated within. There’s another set of cupholders just ahead on the backside of the front centre console, these especially good for large water bottles. They’re fairly accessible to front occupants is well.

Along with ultra-roomy passenger volume, which measures 2,665 litres (94.1 cubic feet) if you happen to be comparing numbers, the Versa Note provides a spacious and extremely versatile cargo compartment. It gets a high-quality hard shell felt covered cargo cover that can be easily removed when needed, while even better is the foldable and/or removable Divide-N-Hide cargo floor mentioned earlier, that adds depth when transporting taller items, or when set into its higher position provides a flat loading floor after the 60/40 split-folding rear seatbacks are lowered. They’re easy to drop down thanks to handles on the tops of the seatbacks that can be easily reached from the rear, negating the need to walk around to the side doors to do so. Folding them forward results in the sizeable 532-litre (18.8 cubic-foot) luggage area growing to 1,084 litres (38.8 cubic feet), which is expansive for this class.

Heading out on the road I’m reminded about how nice the Versa Note is to live with. I’ve driven a number of these cars over the years, and usually find them a bit too comfort-oriented for my tastes. In fact, I believe I once called this car the antithesis of sporty, or something similar. This SL was different however. While it’s still the most comfortable car in its class, it also handled quite well when pushed. Off-the-line acceleration was quite brisk too, while its continuously variable transmission (CVT) is the epitome of smooth and linear. It doesn’t allow for much manual actuation, but do we need that kind of control in a car like this? I certainly didn’t.

Then again, the reason I love Nissan’s even smaller and more affordable Micra so much is its drivability, especially when mated up to its base manual transmission. Fortunately, unlike most in this class the Yokohama-based brand has both small car bases covered. If you want a really sporty entry-level car I recommend the wee little Micra, as it’s the new spiritual successor to the original Mini, but if you’re rather convene in comfort this Versa Note SL is a very good choice.

Either way you can’t go wrong with one of Nissan’s small cars or SUVs. This Versa Note SL delivers all the calming comfort and convenience any daily commuter could want, combined with excellent fuel economy. If you’re in the market for a small car, make sure you add the Versa Note to your shortlist.
©(Copyright Canadian Auto Press)
Car Shopping Tools