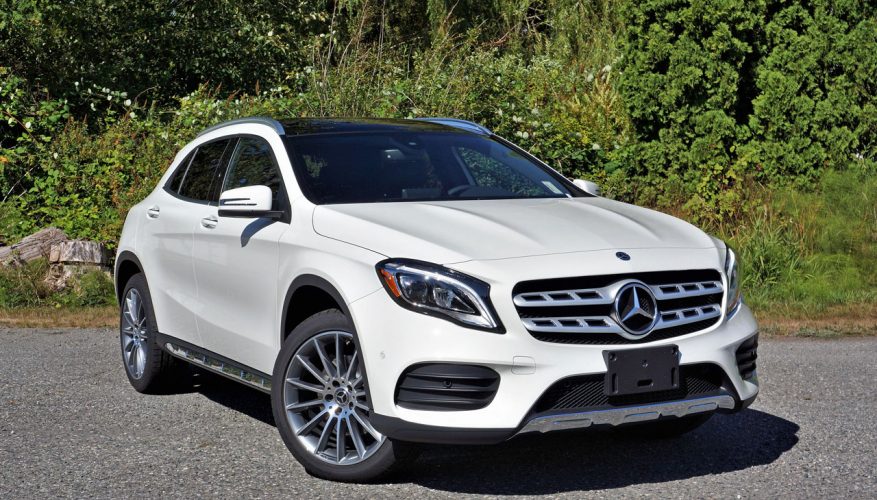 By: Trevor Hofmann
While luxury branded competitors scramble to fill niches within all the various SUV categories, Mercedes has long led the way.

The three-pointed star brand has steadily grown its SUV lineup since then, adding the seven-occupant GL-Class in 2006, now named GLS, the GLK in 2008, now replaced by the entirely new GLC, and more recently this GLA-Class in 2014. The following year Mercedes expanded its GLE-Class lineup by adding a sportier Coupe variant, which was followed up last year by the GLC-Class Coupe.

The last two models have more in common with the GLA than any of the others on that long list. No doubt the success of Mercedes’ entry-level SUV, along with the mid-size BMW X6 that created this new crossover coupe segment and the Bavarian brand’s smaller X4 that followed, helped motivate the powers that be in Stuttgart to develop sportier versions of their compact and mid-size SUVs, and now that they’re here who knows what might be coming down the pike in the near future.

While interesting from a curiosity standpoint, I’d be quite content with a GLA, and it doesn’t have to be the outrageously quick 375 horsepower GLA 45 AMG 4Matic that I drove last year either, as the 2018 GLA 250 4Matic I took a turn in a couple of weeks ago would fit into my lifestyle just fine.

Those familiar with the GLA will notice this 2018 model has received a mid-cycle refresh, which updates styling, adds some new standard features, and modifies some option packages.

With respect to styling, the 2018 GLA gets a more intricately detailed two-slat grille that’s tied more directly to its larger SUV siblings, while a new lower fascia adds standard fog lamps with chrome bezels or sportier matte black straked corner vents with the as-tested Sport package, and either a much more pronounced matte silver chrome lower grille surround at centre in the base model or a more subtle bright chromed metal undertray with the Sport package-although I can’t decide which looks sportier.

The reformed rear bumper gets a similar bright chrome undertray with the Sport package or a matte silver version in base trim, the former visually tied together via chrome rocker mouldings down each side and the latter all matte black, while additional matte or bright metal details join new LED taillights on the GLA’s backside. Lastly, matte silver five-spoke 18-inch alloys now come standard, while my Sport package equipped tester included 19-inch multi-spoke rims with grey painted pockets instead of an available glossy black set, although both ride on 235/45 all-seasons. Of course, there are additional aesthetic differences between trims and packages, this especially noticeable when moving up to the GLA 45 AMG.

Inside, Mercedes has installed a modified primary gauge cluster with a restyled backplate and new silver and red metal needles, plus they’ve changed up the steering wheel switchgear and given the rim a standard leather wrap, replaced the old Silver Wave standard instrument panel inlay with a new metal-look Sail Pattern design, made the already fabulous circular air vents even more alluring with a new standard ring design, and aluminized a row of buttons on the centre stack, while the fixed tablet-style infotainment display gets a standard reverse camera or a new optional 360-degree surround parking monitor.

Speaking of safety, I find it odd that BMW’s competitive X1 is the only premium branded “Small SUV” to achieve IIHS Top Safety Pick status, let alone the U.S. government agency’s most coveted Top Safety Pick Plus award, yet there’s a long list of mainstream volume winners from Fiat’s similarly subcompact 500X and Mazda’s CX-3 to that Japanese brand’s CX-5, plus Toyota’s RAV4, Honda’s CR-V, Nissan’s Rogue, etcetera. Premium brands used to lead in such areas, Mercedes having been first to introduce airbags, for instance, plus many more leading edge safety features, but being that just three Mercedes models have been recognized as either Top Safety Pick (1) or Top Safety Pick Plus (2) achievers, this is clearly no longer the case.

Even Lincoln has three TSP/TSP+ earning models, and it’s barely a premium brand with a scant number of models, whereas Acura and BMW have four apiece, Audi, Lexus and Volvo have five each, as does Mazda in the mainstream sector, this number of TSP/TSP+ models built upon by Hyundai, Nissan and Subaru with six individually, Honda, Kia and Volkswagen with seven each, and Toyota with nine. Still, plenty of brands have fewer IIHS recommendations than Mercedes, Alfa Romeo, Jaguar, Land Rover, Maserati, and even Porsche with none at all.

IIHS issues aside, the standard GLA 250 4Matic is plenty safe with no shortage of active and passive safety features including anti-fatigue Attention Assist, active brake assist, adaptive braking with hold function, hill start assist, an ultra-rigid body structure with crash mitigating crumple zones, plus the usual traction and stability control and advanced braking technologies, as well as eight airbags including two for front occupants’ knees. So consider the GLA plenty safe despite missing some of the latest electronic semi-autonomous accident avoidance equipment.

The $38,500 GLA 250 4Matic can be had with a $2,200 Premium package that previously included the now standard backup camera, this feature now replaced by new full LED headlamps, while additional Premium package features include dual-zone auto climate control, a larger 8.0-inch infotainment display with Apple CarPlay and Android Auto smartphone integration, and blindspot monitoring.

After first adding the Premium package you can top it up with the $2,000 Premium Plus package that features proximity-sensing keyless access, power-folding side mirrors, a powered front passenger seat, auto-dimming rearview and driver’s side mirrors, ambient interior lighting, a garage door opener, and a foot-activated powered tailgate.

Along with everything already noted for my tester’s $1,500 Sport package, the brakes are upgraded including cross-drilled front rotors, and the interior gets a black roofliner, while the gloss black wheels will set you back an additional $500.

Of note, if you choose not to go with the Sport package you can get an even sportier set of twinned five-spoke 19-inch alloys for $700, while other standalone options include a $1,480 powered panoramic sunroof, a $1,100 navigation system with mobile internet and MB apps, a $1,000 12-speaker 450-watt Harman/Kardon Logic7 5.1 surround sound audio system, $475 satellite radio, a $350 storage package, $900 semi-autonomous self parking, the aforementioned 360-degree parking camera, and plenty of individual features that otherwise come in packages. Lastly, three standard colours are joined by seven $890 optional metallics, the newest being a beautiful golden copper hue dubbed Canyon Beige, while special matte designo Mountain Grey Magno paint is priced at a cool $2,500.

Behind that stylish new grille is the same powertrain as last year’s GLA 250 4Matic, Mercedes’ tried and tested 2.0-litre turbocharged inline four-cylinder making a satisfying if not stimulating 208 horsepower and 258 lb-ft of torque. I suppose I’m a bit jaded after being slapped in the back by the GLA 45 AMG’s previously noted punch off the line, and of course that powertrain is always available for thrill-seekers, but as I mentioned at the beginning of this review I was quite content with this base engine. It helps that Mercedes hooked it up to its very fast-reacting yet adequately smooth 7G DCT dual-clutch automated transmission with paddle shifters, a gearbox that makes the most of the performance at hand, evidenced by the SUV’s speedy 6.6-second sprint to 100km/h, while helping the GLA 250 4Matic eke out a very respectable 10.1 L/100km in the city and 7.6 on the highway.

Mercedes includes standard regenerative braking and auto start/stop to reduce consumption and emissions, the latter capable of shutting the engine off when it would otherwise be idling if you leave it engaged, while standard Dynamic Select includes an Eco drive mode that retards throttle response, lulls shift points and maintains the Comfort mode’s easy power steering effort to further improve economy and air cleanliness.

At the opposite end of the performance spectrum, the Dynamic Select system’s Sport mode sharpens the GLA 250 4Matics reflexes while shutting down Eco Start/Stop, giving the little SUV the kind of performance edge that enthusiasts enjoy, or alternatively you can engage Off-road mode for tackling gravel roads, light-duty trails, or deep snow. The mode I most prefer is Individual, which even lets you choose pure manual shifting. I played around with this while applying all the Sport mode engine settings and leaving the suspension in its softer setting, this combination ideal for controlled high-speed driving on rougher backcountry roads. This is where the GLA 250 4Matic feels most at home, or at least this is how I enjoyed it most during my test, being that no racetrack was available. Despite looking like a little SUV it performs like a true German sport sedan, or rather a sport hatch, its at-the-limit handling predictably confidence-inspiring and its ride always comfortable and never harsh, even in Sport mode.

As you might expect, the cabin was plenty quiet as well, partly due to a sleek 0.32 coefficient of drag as well as properly sealed doors, windows, sunroof, and rear hatch, not to mention lots of hidden sound insulation. I imagine the GLA’s high-quality soft-touch dash top, front and rear door panels, and soft-painted harder plastics below the metal inlays on the instrument panel reduce noise as well, while they look and feel nicer than hard composites would. Only the door speaker grilles and pocket inserts were harder plastics, which is pretty impressive for this subcompact SUV class. The aforementioned metallic trim is over the top, mind you, especially those gorgeous dash vents.

The multi-information display amid the primary controls is comprised of a high-resolution, full-colour TFT with plenty of features, its trip information, navigation, audio, telephone, drive assist, time for service information like tires, vehicle settings, and more controlled by scrolling through the left steering wheel spoke arrows. This said if I could find an area of weakness it would be the rudimentary rotating dial infotainment controller on the lower console. It’s plenty nice looking, rimmed with nice aluminized metal, but it’s not as advanced as Mercedes’ usual controller and therefore the system would work better if just a touchscreen, especially now that state-of-the-art Apple and Android connectivity interfaces have been added and finger gesture controls like tap, swipe and pinch can’t be utilized.

As far as comfort and roominess goes, the GLA is sizeable for its subcompact SUV class, but not class leading. Most body types should have no issues up front, but when the driver’s seat was set for my admittedly less than average five-foot-eight height I was left with just four inches ahead of my knees when sitting in back, plus three inches above my head. I had room to spare from side-to-side while a large armrest flipped down from centre, complete with pop-out cupholders. There’s an ashtray and 12-volt charger on the backside of the front centre console too, as well as rear air vents, and I must say the rear quarters are finished just as impressively as those up front, especially the door panels that aren’t always detailed out as nicely with some competitors.

The cargo compartment offers hidden storage underneath the load floor, and the 60/40 split-folding rear seatbacks lay down easily via latches on top of each backrest. They don’t fold completely flat, but that’s common in the subcompact class, especially with an all-wheel drive vehicle, but the previously noted centre pass-through allows rear passenger use of the more comfortable outboard positions while longer items like to skis are placed down the middle. By the numbers the GLA can haul 421 litres (14.8 cubic feet) of gear with all seats in use or 1,235 litres (43.6 cubic feet) when the rear passengers are emptied out, which means it should handily take care of most owners’ needs.

Overall, the updated 2018 GLA 250 4Matic does a great deal more than merely take care of its owner’s needs. Rather, it combines all the utility a subcompact SUV should, with an ideal blend of style, sportiness, efficiency, refinement, and features, all for undeniably good value. No wonder it’s so popular amongst entry-level premium buyers.
©(Copyright Canadian Auto Press)
Car Shopping Tools