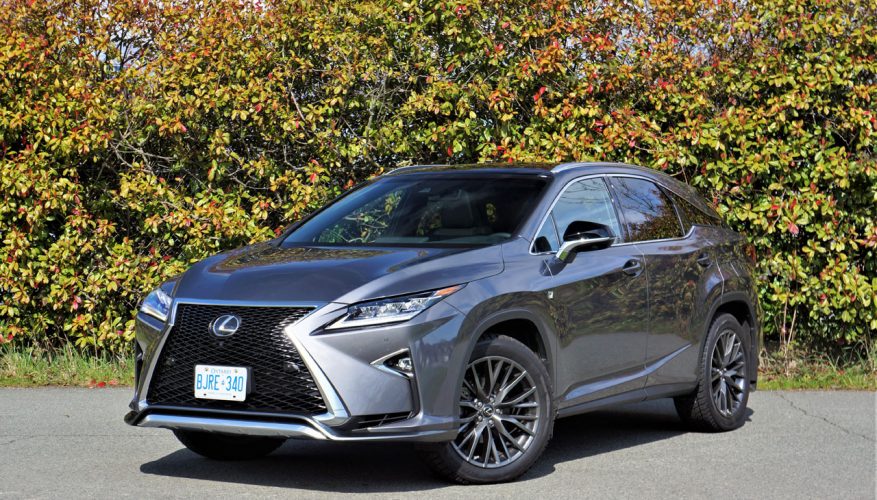 I was about to start this story by saying there has never been a more successful luxury SUV created than the Lexus RX, but after some in-depth research I’m finding out that’s an old, outdated statistic.

The RX, which was the first car-based luxury crossover SUV ever produced, has been amazingly successful here in North America where it remains number one by a long shot, but within Canada alone it’s currently second behind Audi’s smaller albeit almost as accommodating Q5, while globally they both get beaten badly by Buick’s number-one selling Envision that sold 123,397 units worldwide during the first five months of 2017 (you can thank China for that), as well as Mercedes-Benz’ GLC runner up that found 117,856 global buyers over the same period. I don’t have exact numbers for the RX in all the countries it’s sold in because it didn’t make the top 100 vehicles list. So much for starting out this garage overview with a bang.

Of course, with 109,435 total U.S. sales last year and 8,147 here in Canada, and 46,737 in the States over the first half of 2017 and 4,501 north of the 49th, Lexus and its RX have nothing to be ashamed of. Toyota’s luxury division is really only getting its feet wet in China after breaking through the six-figure threshold for the first time last year with 109,151 total sales brand-wide, while Lexus International reported 677,615 global deliveries in 2016, which is a four-percent improvement over 2015 and its fourth consecutive record year of sales growth. Yup, it’s tough to complain with numbers like that.

It’s difficult to complain after picking up Lexus’ latest 2017 RX 350 either. The five-passenger SUV was redesigned for the 2016 model year and still looks very sharp, literally. There isn’t an edgier sport utility available, now that Lexus’ ultra-wide spindle grille is front and centre, made even bigger and bolder in our tester’s F Sport trim. It flows into a deeply sculpted hood up top, while yet more jagged edges outline each of its triple-stacked LED light cluster elements to each side, these finished off with checkmark LED DRLs at bottom. Even more radically shaped fog lamp bezels are immediately surrounded in chrome before getting finished off with apostrophe-style vertical vents at each corner, all sitting atop razor-thin lower valance detailing.

The RX 350 F Sport’s flanks are almost as chiselled, each fender shaved flat ahead of gloss black, chrome and LED-infused side mirror housings on the beltline and deeply gorged, upward sweeping rocker panel sculpting across the lower doors, former foreshadowing a glossy black D-pillar depicting a floating roof while the latter visually melds into a chunky rear bumper encasing a sporty rear diffuser and two angularly shaped exhaust ports. By comparison the LED taillights are almost conservative, although a nice fit just the same, while plenty of satin-finish metal brightwork combine with fabulous looking 20-inch dark graphite multi-spoke alloys on 235/55R20 rolling stock. Lexus is hardly a boring brand anymore, and its once conservative RX is now one of the more avant-garde in its class.

The RX 350 F Sport’s cabin is almost as creased and creviced as its origami-folded exterior sheetmetal, but I leave any comments about style, materials quality, refinement, switchgear, electronic interfaces, and feature usability to my upcoming road test review, due out soon so to beat the arrival of the 2018 model.

Other than rumour about a longer extended-wheelbase three-row seven-passenger version expected early next year I don’t have any info about that the new model year, but the five-occupant version arriving this fall is expected to be mostly carryover so you shouldn’t feel any hesitation about buying a 2017. Lexus made a few changes to this year’s model too, including the addition of a new Safety Sense+ suite of advanced driver-assistance systems, now standard. On the list is millimeter-wave radar sensing pre-collision warning, lane departure alert, dynamic cruise control, and auto high beams, all items that were previously bundled in with expensive option groups yet are now standard across the entire model range.

On the options list is new Intelligent Clearance Sonar, which is collision mitigation for low-speed situations such as parking, while additional active safety options include Vehicle Dynamics Integrated Management (VDIM), a wide-view front, rear and side parking monitor, and a 12.3-inch Electro Multi Vision (EMV) display that most companies would call a head-up display, but as slick as some of these systems are Lexus has yet to adapt much in the way of autonomous mitigation systems to the RX 350, such as automatic corrective steering, but its aforementioned pre-collision system is designed to apply emergency auto braking after an initial warning.

The RX 350’s numeric designation actually refers to its 3.5-litre V6 engine, unlike so many other models that have deviated from this sensible practice (the RX 450h hybrid being one), its output a commendable 295 horsepower and 268 lb-ft of torque thanks in part to D4-S fuel injection that combines direct injection with conventional port injection in order to best balance performance and efficiency. Aiding both objectives is an eight-speed automatic gearbox, while standard all-wheel drive is par for the course in Canada’s premium SUV sector. Lastly, Lexus’ standard Drive Mode Select adds Sport, Eco and Normal modes to either enhance the driving experience or minimize fuel usage and emissions.

As with most vehicles in this class there’s no shortage of available options with the 2017 RX 350 thanks to four packages. Rather than organize them by price, with the least expensive being the $7,600 Luxury package, followed by the $8,700 F Sport Series 2 package, and either the $13,450 F Sport Series 3 or identically priced Executive package, I thought it best to go over the two F Sport packages and then the two other option groups.

Alternatively the Luxury package forgoes the F Sport styling and performance upgrades yet adds its own 20-inch alloys along with the aforementioned premium LED headlamps and taillights, parking sensors, 12.3-inch EMV, auto air recirculation, and navigation, plus includes LED illuminated aluminum treadplates, a leather-wrapped and wood-trimmed steering wheel rim, 10-way powered front seats with four-way powered lumbar support, premium leather upholstery, and rear side sunshades. Move up to the Executive package and everything just noted in the Luxury package is included, plus all F Sport Series 3 package upgrades. The only negative to the way Lexus Canada has packaged up its top-line RX 350 is an inability to get an F Sport with “the works,” or rather all available options.

That’s probably enough detail for now. Stay tuned for a full road test that will include all of my dictated notes organized into slightly more readable commentary. Until then you can check out my review of the 2016 Lexus RX 450h F Sport…