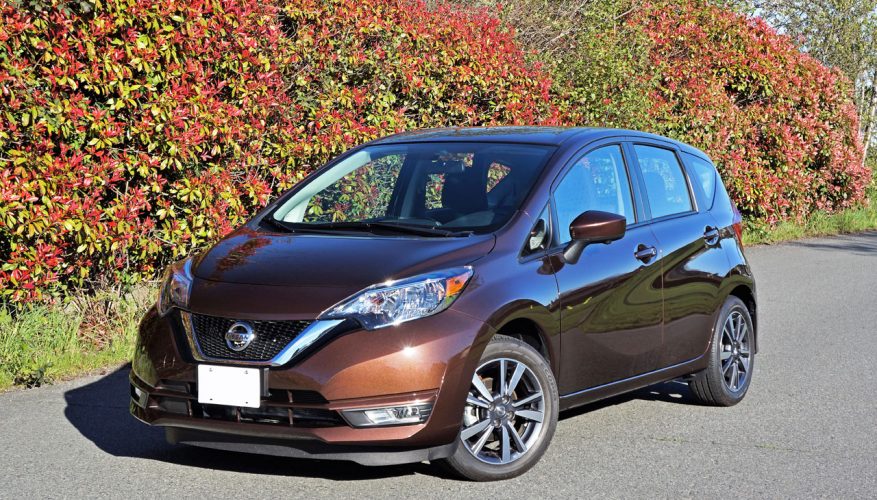 Getting an economy car doesn’t have to be boring or uncomfortable, Nissan’s Versa Note especially good at relieving the latter problem.

The Japanese brand’s second smallest hatchback gets a mid-cycle update for 2017, highlighted by a particularly attractive new “V-Motion” chromed grille design sourced from previously restyled models within Nissan’s every growing lineup of cars, SUVs and trucks.

Along with the tiny Micra city car, plus the Juke and new Qashqai SUVs, the Versa Note is in charge of attracting newcomers and fixed income earners to the automaker, its very approachable $14,498 base price one of its more agreeable attributes. For that you get a nifty looking little runabout that’s better made than many in subcompact class, its 1.6-litre four-cylinder engine producing a rambunctious 109 horsepower and 107 lb-ft of torque and its claimed fuel economy an even more smile-inducing 7.5 L/100km in the city and 6.0 on the highway when hooked up to its optional as-tested CVT. A five-speed manual transmission comes standard in base S and second-rung SV trims, as well as this top-line SL, whereas the CVT is optional in all three of these and standard in the “sportier” SR, which sits between the SV and SL in the Versa Note trim hierarchy. Just why Nissan decided a CVT would endear performance fans to a sport model is anyone’s guess, so let’s just say the SR’s sporting prowess is limited to styling plus wheels and tires.

You’d be forgiven for thinking my tester’s slick looking new machine-finished 16-inch alloys on 195/55HR16 all-seasons were part of the sportier package, but these are unique to the top-tier SL, some of its other features including fog lamps, heatable powered side mirrors, proximity-sensing keyless access with pushbutton ignition, a larger 5.8-inch colour infotainment touchscreen (up from 5.0 inches) with navigation and a 360-degree Around View parking camera, voice recognition, satellite radio and SiriusXM Traffic, plus more.

Of course the 2017 Versa Note SL is priced higher than the base S, but it’s less than $20k at $19,748, and can only be pushed higher by adding dealer-installed accessories like a $329 body-colour rear rooftop spoiler, $100 chromed door handles, a $49 chrome exhaust tip, $151 illuminated metal treadplates, and plenty more, the only extra I’d add being a $329 auto-dimming rearview mirror with an integrated Homelink garage door opener.

I’ll comment more on comfort in my upcoming review, and of course go on at length about driving dynamics, interior quality, feature functionality, and critically important in this class, passenger roominess plus cargo capacity and flexibility.

Until then take note that the grille isn’t the only new item on the 2017 Versa Note’s update list, other modifications including the front bumper and lower front fascia, plus the rear bumper that now features last year’s sportier SR styling across the entire range. The SL isn’t the only one to get new wheels either, with new 15-inch alloys for the SV and new covers for the base model’s 15-inch steel wheels. Those looking to stand out from the crowd will appreciate new Monarch Orange paint too, whereas Deep Blue Pearl makes the little hatch look richer and my tester’s Coca Embers adding a retro ‘70s cool factor. Other than the feature adjustments already noted, the only notable changes inside are larger cupholders across the line and a second 12-volt power outlet on all but the base model.

Come back soon for the full review…