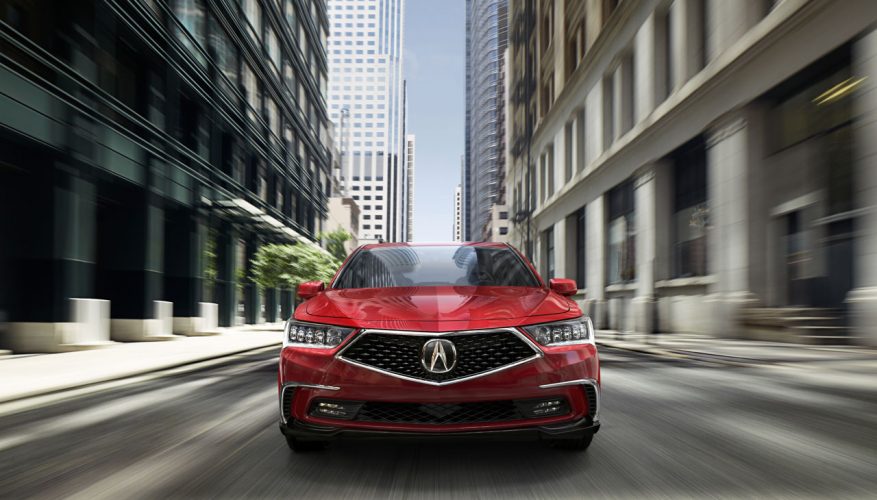 That’s what Acura has planned for the 2018 RLX, following the same Precision Crafted Performance design language theme as the recently rejuvenated 2018 TLX, and the MDX that underwent extensive cosmetic surgery for the 2017 model year.

Acura plans to show the new 2018 RLX in the metal at the upcoming Monterey Automotive Week that runs from August 15 through 19 in Monterey, California, where it hopes to find favour with its ideal target market.

The most noticeable change to the new RLX is the adaption of Acura’s new signature diamond pentagon grille and more pronounced Acura badge at centre, which transforms its front end while giving a new sense of purpose to the entire car.

After decades of searching for a trademark brand identity that’s both unquestionably unique and undeniably attractive, Acura created the new diamond pentagon grille first seen on the dramatic 2016 Acura Precision Concept that debuted at the North American International Auto Show in Detroit on January 2016, a car we’d love to see brought to production as soon as possible.

The 2018 RLX is Acura’s third production model to receive the new diamond pentagon grille design, the fabulous NSX Sport Hybrid ironically using a modernized version of the outgoing grille’s general shape, although it might be challenging to graft the bold new look onto the sleek mid-engine supercar’s narrow front fascia.

The NSX marked the second hybrid in Acura’s lineup when it arrived late last year as a 2017 model, the first being the RLX since model year 2015, while the Japanese luxury brand added the new MDX Sport Hybrid earlier this year.

Like the other Sport Hybrid models, the RLX Sport Hybrid uses Acura’s three-motor powertrain with electric torque vectoring, featuring an internal combustion engine (ICE) powering the front wheels in concert with an electric assist motor. The RDX defaults to this most fuel-efficient mode in the dry or under light loads, but if increased throttle input, hard cornering, or driving on slippery surfaces causes the need for rear-wheel propulsion an electrified version of Acura’s torque-vectoring Super Handling All-Wheel Drive (SH-AWD) provides traction from all four tires via two rear wheel-mounted electric motors.

Acura dubs this system Sport Hybrid Super-Handling All-Wheel Drive (Sport Hybrid SH-AWD), resulting in a long enough name to make the German’s proud, and while it’s a particularly advanced hybrid powertrain, its sophistication only scrapes the surface of all the technology aboard the RLX.

Like the 2017 RLX Sport Hybrid we reviewed earlier this year, the new 2018 RLX Sport Hybrid will carry forward with the AcuraWatch suite of advanced driver-assistance systems (ADAS) including forward collision warning with autonomous collision mitigation braking, blindspot monitoring and lane departure warning with lane keeping assist and road departure mitigation, and rear cross-traffic alert, which was enough to earn the 2017 RLX an IIHS Top Safety Pick rating, while new for 2018 is Traffic Jam Assist, a first for Acura.

Traffic Jam Assist works together with another AcuraWatch feature, Adaptive Cruise Control with Low Speed Follow, helping reduce driver fatigue and stress amid congested traffic by keeping the RLX within its lane at a set interval behind the car ahead. Consider it low-speed autopilot, which is certainly a safer way to implement fully autonomous driving than some premium carmakers.

AcuraWatch combines millimeter wave radar together with monocular camera sensing technology in order to detect lane markings and surrounding vehicles, which not only keeps the car within its lane, but can also intervene in order to prevent a collision or mitigate the severity of impact.

Premium in mind, Acura promises some interior enhancements including improved materials on key touch points, such as redesigned seats featuring high-contrast stitching and piping, plus a new Espresso interior option.

A more detailed list of features, prices and fuel economy information will be released ahead of the car’s November 2017 on-sale date.

Rarely does a mid-cycle refresh make such a dramatic difference, and no doubt Acura is hoping the new design direction helps raise the RLX Sport Hybrid’s currently slow sales volume, which resulted in just 37 Canadian sales over the first six months of 2017 and a mere 107 during all of last year. This meant that at the close of 2017 the RLX was the sixth slowest selling car in Canada, right behind the seventh slowest selling Infiniti Q70 that’s arguably its closest competitor. At least Acura can take some solace in selling more flagship luxury sedans than Lexus and Kia sold full-size LS and K900 models, the latter Canada’s least popular car of all, whereas Audi, Porsche, Maserati and Jaguar won’t be feeling too smug in ninth, 12th, 13th and 14th slowest for their A8, Panamera, Ghibli and XJ respectively—Lexus’ GS sedan’s 17th placement making it the top-selling direct rival on the bottom 20 list.

Expect the 2018 Acura RLX to climb up through the ranks after November, but don’t count on it catching up to the ultra-popular RDX and MDX crossover SUVs anytime soon.