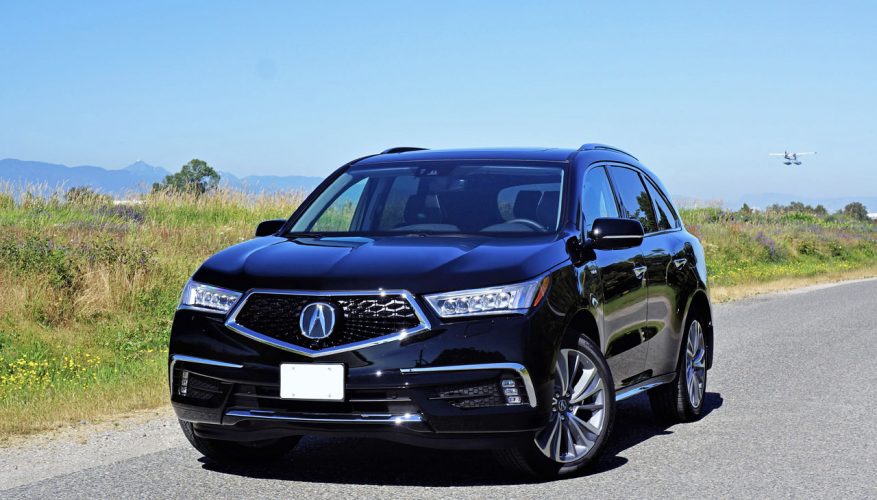 By: Trevor Hofmann
Here’s a no brainer. Acura finally figured out a way to make its highly advanced “Sport Hybrid” drivetrain relevant by incorporating it within a vehicle people will actually buy in quantities large enough that it might even make a profit.

I know such a volume-oriented business model seems logical at first thought, but considering how many electrified cars lose money, some sense can be made of minimizing production-as of Q2 2017 Acura had sold just 37 RLX Sport Hybrid sedans in Canada and 555 in the U.S. (actually the U.S. number was a mix of top-line Sport Hybrids and front-drive base RLX models that we don’t get here anymore, so the Japanese luxury brand is minimizing hybrid losses even better than the numbers suggest).

The new 2017 MDX Sport Hybrid will likely be a winner, however, especially considering Acura Canada sold 5,425 normally aspirated versions last year and the brand’s U.S. division purveyed 55,495. Even better, as of Q2 2017 the Canadian numbers were showing positive growth at 2,659 units compared to 2,446 this time last year, this partially due to a mid-cycle upgrade that adds a new more dramatic front grille and classier lower fascia plus some upgrades inside, although U.S. sales were nevertheless ebbing slightly at 23,555 units after six months compared to 24,615 over the same period in 2016. Still, that’s a whole lot of volume to build a hybrid upon.

Another positive in the MDX Sport Hybrid’s favour is reliability, with Acura having had plenty of time to make the components used in this sophisticated power unit dependable in the now well-proven RLX Sport Hybrid just noted. To be clear, Acura has chosen to separate the two vehicles by more than just sales numbers and body styles, with the flagship four-door luxury sedan’s V6 displacing the automaker’s usual 3.5 litres instead of the new fuel-friendly 3.0-litre unit used for this more family-oriented flagship SUV.

The MDX version still uses Acura’s three-motor Sport Hybrid powertrain with electric torque vectoring, so the basics of the system are intact and comprised of an internal combustion engine (ICE) powering the front wheels in concert with an electric assist motor. The MDX defaults to this most fuel-efficient mode more often than not, but if increased throttle input, hard charging through a corner, or driving on slippery surfaces causes the need for rear wheel engagement, an electrified version of Acura’s torque-vectoring Super Handling All-Wheel Drive (SH-AWD) provides traction from all four standard 245/50R20 all-season tires via two rear wheel-mounted electric motors. Acura dubbed the new system Sport Hybrid Super Handling All-Wheel Drive (SHSH-AWD), making the world’s longest moniker for AWD even longer. Ok, I made up the acronym part, although “SHSH” seems appropriate when quietly crawling through parking lots under EV power.

Unusual yet welcome for an SUV that promotes its sporting capabilities is the same seven-speed dual-clutch automated transmission used in the RLX Sport Hybrid (instead of the continuously variable type of transmission utilized by most competitive hybrid systems) that provides quick shifts via engaging steering wheel paddles, while Acura’s unique pushbutton gear selector features a responsive “DYNAMIC” button with Comfort, Normal, Sport, and Sport+ modes, the latter two making it even more entertaining to drive than a number of its competitors from more traditional European brands.

Of note, the fabulous NSX Sport Hybrid uses a similar system to the MDX and RLX Sport Hybrids, albeit completely reversed due to its mid-engine sports car layout. Of course, the NSX’ 573 net horsepower and 476 lb-ft of torque puts it into the league of Ferrari and McLaren hybrids, but much of the tech trickles down to this MDX Sport Hybrid. Just the same I wouldn’t go as far as Acura has by saying the new MDX Sport Hybrid has the “soul of a supercar.”

The 1,725-kg (3,803-lb) 2017 NSX conservatively launches to 100 km/h in just 3.3 seconds and tops out at 307 km/h (191 mph), whereas the MDX Sport Hybrid probably shaves a couple of tenths off the regular MDX’ 7.2-second sprint to 100 km/h for a sub-7.0-second run, which is good for this class albeit hardly supercar territory. I think it’s safer to say the MDX Sport Hybrid has the soul of a sporty and particularly efficient family hauler, although that doesn’t quite have the same ring to it.

Good news is the Sport Hybrid drivetrain doesn’t add too much mass over its ICE-only sibling with a curb weight of only 2,074 kilos (4,572 lbs) compared to the regular MDX Elite’s 1,950 kg (4,299 lbs), or 124 kg (273 lbs) more, while its exterior dimensions are identical and interior almost as spacious.

Yes, the MDX Sport Hybrid has nearly the same passenger volume of 3,721 litres (131.4 cubic feet) compared to the conventional MDX’ 3,758 litres (132.7 cu ft), the difference an infinitesimal 37 litres (1.3 cu ft), whereas all-important cargo capacity remains exactly the same at 447 litres (15.8 cubic feet) behind the third row, 1,230 litres (43.4 cu ft) behind the second row, and 2,575 litres (90.9 cu ft) when the two rear rows are folded flat, making it the largest and most accommodating new hybrid SUV on the planet (thanks to GM no longer making HEV versions of its full-size Tahoe, Yukon and Escalade).

This last point unearths some very important realities: there are plenty of electrified competitors to choose from, the list soon growing to include the upcoming Audi Q7 e-tron, Range Rover Sport Plug-In Hybrid, Maserati Levante PHEV, and who knows what else (Cadillac’s XT5 PHEV seems only destined for China), and as you likely noticed the Europeans offer plug-in models with the ability to drive solely by electric propulsion, reducing harmful emissions and fuel consumption even further.

And what about the MDX Sport Hybrid’s efficiency? Acura Canada claims a five-cycle rating of 9.1 L/100km city, 9.0 highway, and 9.0 combined compared to the regular MDX Elite’s 12.2 city, 9.0 highway, and 10.7 combined rating, which boasts an advanced nine-speed automatic, or 12.6, 9.0, and 11.0 respectively for the same SUV without auto idle start/stop. Getting such a large, luxurious, and powerful seven-passenger AWD-equipped SUV below the 10.0 L/100km threshold is impressive, but 9.1 in the city is excellent.

Then again, some of its aforementioned peers, like Infiniti’s QX60 Hybrid at 8.9 L/100km city and 8.4 highway, do better, and the Euro-sourced PHEVs even more so, while some even produce more power despite better economy. There’s always a price to pay for more, of course, and to that end the new MDX Sport Hybrid strikes a reasonable balance of fuel economy and performance at $69,990 plus freight and fees. I’m not going to even try and compare each available competitor on pricing, because this would cause the need to break down all standard features available for each model before devising some nose bleed formula for factoring in performance, safety, etcetera-not going to happen.

Suffice to say you get an impressively equipped SUV for just under $70k, Acura bundling in almost everything that comes standard with its conventionally powered top-line 2017 MDX Elite except for its uniquely styled alloy wheels (also measuring 20 inches), amplitude reactive dampers (it gets a standard active damper system), and trailer stability assist, although the Sport Hybrid adds metal pedals for added style, plus of course all the electrically motivated power and improved economy mentioned earlier.

Unusual for hybrids, the minimal price premium for going electric is the best news. Being that the 2017 MDX Elite is already competitively priced at $65,990, you’ll only be paying a $4,000 premium for all the Sport Hybrid’s go-fast, extra-efficient electrified goodness, which is unheard of reasonable.

Again, I’m not going to compare this hybrid SUV to the many rivals noted before, but you’ll be hard pressed to find one with as much performance, quality, refinement, size, or as many standard features for anywhere near the price. I’ll go into detail with the equipment just so you get an idea of all that comes standard, the list including everything already mentioned as well as wiper-linked auto on/off full-LED headlamps with auto high beams, auto-leveling and washers, LED fog lamps, LED taillights, power-folding, auto-dimming, heatable and remote-powered side mirrors with driver recognition, reverse gear tilt-down, and integrated turn signals, remote start, perimeter/approach puddle lights, proximity access for all four doors, acoustic glass, a heated windshield, rain-sensing wipers, plus metallic or pearl paints, and that’s just outside.

The most impressive “more” part of this equation is AcuraWatch, a suite of auto-sensing and driver-assist technologies that includes road departure mitigation, lane departure warning, forward collision warning, lane keeping assist, and collision mitigation braking with pedestrian detection, all of which help the MDX earn the IIHS’ best possible Top Safety Pick Plus rating for its fourth year running, while it also gets an NHTSA five-star crash test rating.

The MDX Sport Hybrid compares well to the best in its class when it comes to materials quality, fit and finish, overall refinement and quietness, roominess and comfort even in its third row, and the list goes on, but it comes up a bit short in electronic interfaces. Not in the number of screens as it has one too many in my opinion, but rather in its lack of a fully configurable primary gauge cluster, its mostly analogue dials flanking a colour multi-information display instead, whereas the centre stack digitals include a top display controlled by a set of buttons and large rotating knob on the most protruding portion of the console, just below the touchscreen. These aren’t as high in resolution, as deep in contrast, or as graphically modern as most challengers, nor do they work as well due to missing essentials such as Apple CarPlay, Android Auto, MirrorLink, etcetera, these qualities and features now part of the lesser Honda brand’s infotainment suite and therefore soon to be added to next generation Acura products. Until then the MDX will look and feel a bit dated compared to many peers, while its lack of a panoramic sunroof overhead makes this top-line model less appealing as well.

If you can overlook some of these shortcomings, the new 2017 Acura MDX Sport Hybrid is a superb seven-passenger SUV that offers excellent value, great performance, impressive fuel economy, and plenty of style. Seriously consider it.
©(Copyright Canadian Auto Press)
Car Shopping Tools