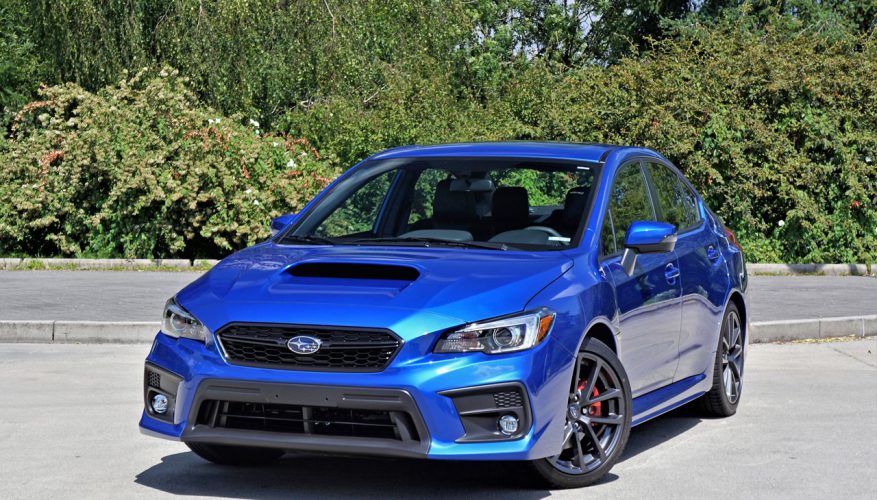 By: Trevor Hofmann
With an entirely new fifth-generation Impreza introduced just last year, Subaru couldn’t exactly let its rally-inspired WRX flagship venture into the 2018 model year without any attention at all. Fortunately they’ve gone all out and given this four-door sports car a thorough mid-cycle update that renews styling, improves interior refinement, adds features, and ups performance.

I think WRX fans will like what they see. While the basic shape of the fourth-generation VA design is the same, improvements include a completely reworked grille with new blackened borders and a black mesh insert, a race-spec style multi-part lower front fascia with a matte black centre vent, and bigger reshaped matte black fog lamp bezels, all supported by a variety of new black alloy wheels depending on trim. The gaping hood scoop, swollen fenders with reverse engine vents and chromed “WRX” appliques, rear deck lid spoiler, and racy matte black rear diffuser with quad chromed tailpipes remain, the combination of new and old making for a more dramatic visual statement that Subaru backs up with yet more on- and off-pavement prowess than ever.

Before you get too excited, the WRX’ 2.0-litre direct-injection twin-scroll turbocharged boxer four remains the same, pushing a feisty 268-horsepower and 258 lb-ft of torque down to Subaru’s famed symmetrical all-wheel drive via an as-tested six-speed manual or optional Sport Lineartronic continuously variable transmission featuring steering wheel paddles, quick-shifting six- and eight-speed manual modes and performance-enhancing Subaru Intelligent Drive (SI-DRIVE). Yes it’s a CVT, but it was deceptively normal feeling when tested last year, and according to Subaru its gear selector operation is improved for 2018.

I was glad to have the six-speed manual this time around just the same. It has always been a nicely sorted gearbox, but Subaru went and reworked the manual’s shift lever and clutch for even tighter, better, smoother feel. The mods are mostly about refinement, with the steering feel of both cars massaged as well, as is the suspension tuning for a better more compliant ride without compromising at-the-limit handling. Let’s be clear here. Subie’s target WRX buyer is aging, hence why they went so far as to reduce interior noise as well, although I must admit to appreciating the maturation of this always pleasing performance car being that I’m aging too.

For those not in the know, the WRX is no longer a sportier Impreza sedan. In fact, from the 2015 model year forward it has simply been designated WRX and is considered a unique model within Subaru’s global lineup, this backed up by unique body panels, and of course it’s dedicated powertrain.

Speaking of trims the base WRX starts at $29,995, while Sport is priced at $33,195 and Sport-tech at $36,495, the latter available with a new manual-only RS package that was featured on my tester for an extra $2,300, or alternatively a new $1,300 EyeSight upgrade that’s only available with the automatic transmission, whereas the CVT adds $1,300 no matter the trim. So as not to be misleading the WRX Sport-tech with EyeSight is the priciest combination, hitting the road at $39,095 plus freight and fees, whereas my Sport-tech RS tester started at $38,795. I know these prices might sound high compared to the average compact four-door sedan, but keep in mind the WRX is better compared to compact premium models due to its superb performance and cult-status prestige.

This last point in mind, Subaru’s intensely loyal customer base is divided into two ardent camps. One is mostly focused on the practical, economical, and PZEV environmental aspects of motoring, whereas the other is passionate about performance, while both can depend on the brand’s reputation for reliability, safety, quality, and high resale values. The WRX and its even more formidable WRX STI stable-mate are legendary in the latter category thanks to decades of motorsport on the world rally stage, and has recently been joined by the BRZ sports coupe. A Subaru performance model that deserves an enthusiastic nod is the Forester 2.0XT, one of the quickest in its compact SUV class, while the brand’s past is filled with go-fast models such as specially tuned versions of the Legacy (including the GT spec.B and GT Wagon) and the now collectable SVX.

A new WRX Sport-tech with EyeSight neatly targets both types of buyers, because along with the inherent practicality of any WRX’ four-door sedan body style, it’s arguably the safest compact in its class. First and foremost it has incredibly adept accident avoidance characteristics built into its agile suspension design, this of course aided by symmetrical all-wheel drive with active torque vectoring, plus multi-mode vehicle dynamics control, and all the active and passive safety kit pulled up from the standard car, while it also gets the plethora of active safety goodies that come as part of EyeSight, these including auto high beams, adaptive cruise control, lead vehicle start alert, pre-collision braking, pre-collision brake assist, pre-collision throttle management, reverse automatic braking, lane departure warning, lane sway warning, and lane keeping assist.

Of note, the current 2017 Impreza with these features earned a best-possible IIHS Top Safety Pick Plus rating, so it’s very likely the upgraded 2018 WRX, which was already a Top Safety Pick last year, will be elevated to the same revered “Plus” status after the IIHS tests it with EyeSight upgrades.

And what about this Sport-tech RS? Sharp eyes will quickly pick out the bright red brake calipers, a nice visual touch no matter the body colour, but you’ll need to be a performance technician to notice the upgrade to higher-spec Jurid brake pads, whereas the RS interior is more obviously enhanced with sporty red/black leather and ultrasuede upholstery, whereas the driver’s seat is downgraded to eight-way power.

Honestly, I could do without powered seats at all, as the base model’s manual seats offer more than enough adjustability and save weight sans servomechanisms, but the nicer RS styling and the extra grip from the psuede inserts were real bonuses. Likewise the enhanced styling and performance gain from the uprated brakes didn’t hurt matters either, although I’d need to test these back to back on the track with a regular WRX in order to feel and measure their advantages. In other words, the WRX’ stock binders are already superb thanks to 316 x 24 mm dual-piston caliper ventilated discs up front and 286 x 10 mm single-piston caliper solid discs in back.

The result is a WRX that looks more exciting, is finished nicer inside, and drives better, a good combination that should more readily adhere it to fans new and old alike. I noted the high-quality synthetic dash top in last year’s Sport-tech tester, but I honestly don’t remember the soft-touch door uppers front and back. Either way they’re included now, while the hood covering the multi-information display atop the centre stack was covered in richly padded leatherette with sporty red stitching, matching the red thread on the steering wheel, door panels, and floor mats, and the inlays across the instrument panel appear like genuine carbon-fibre. The front Recaro seats are superbly formed and brilliantly comfortable with as much support as anything in the class, while the rear seating area continues to be comfortable for four and capable of three abreast.

As always the WRX is effortlessly quick off the line, but now it’s surprisingly quiet until revs started to rise, at which point the flat four responds with an appropriately rorty exhaust note. Of course when push comes to shove the regular WRX is no STI, but its adhesive all-wheel drive provides best-in-class grip no matter the condition of road or weather, causing speed and fun to ramp up without hesitation. The body feels tighter now than it used to, adding confidence through the corners if it actually needed any. The old model already took to curves with a level of skill and finesse few of its peers could match, but the new one feels better, especially over rough, unruly road surfaces. Even fuel economy is decent at 11.3 L/100km city and 8.5 highway with the manual or 12.6 and 9.6 respectively with CVT.

Whether you’ve always wanted a WRX and never took the plunge or you’re considering trading up from an older version, this new 2018 model won’t disappoint. It’s filled to the brim with the kind of pure performance that’s made the WRX legendary the world over, but it’s now grown up considerably too. It’s a difficult car to fault, and one that garners reverential respect wherever it goes.
©(Copyright Canadian Auto Press)
Car Shopping Tools