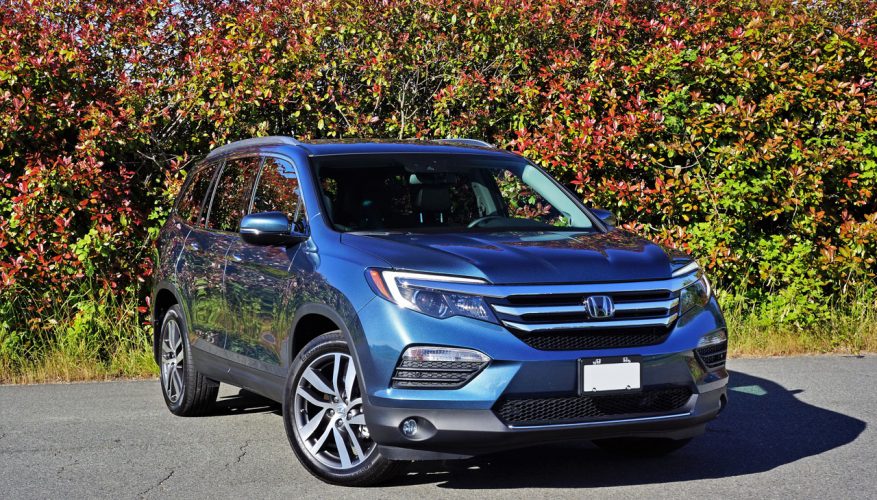 With a shiny new 2017 Honda Pilot in the driveway, I can’t help but glance over at my recently updated sales chart spreadsheet to see how this relatively new model is stacking up against its closest competitors. I keep track of such things as it helps to build the narrative, especially if a particular model isn’t quite measuring up to its associated brand power.

Honda has mega brand power in this country, having long held bestselling status in the car sector (not the pickup truck sector—that was a joke, as its Ridgeline owns “most exclusive” status here and everywhere else it’s sold) with the Civic; currently (as of Q2 2017) in first place in the mid-size car segment with its Accord (yes, ahead of the Camry); also number one in the subcompact SUV segment with the HR-V; constantly contending for top three spot amongst compact SUVs with its CR-V, second as of December 31, 2016 with the Fit in the subcompact car category (albeit it’s plummeted to fifth in just six months), and 11th (as of Q2 2017) for the subject of this review; but that’s better than 12th, where it finished up 2016.

To be fair, if you pare the segment down to car-based crossover SUVs from its 21 overall contestants it registers 10th, although the segment shrinks to 18. We can get rid of a couple of tall wagons that don’t really compete directly, mind you, which yanks the Pilot up a notch to ninth yet removes another from the total tally resulting in 17 direct rivals, and if we’re going to get so granular in our competitive analysis we really should clump models with five and seven passenger variants together (like the Santa Fe Sport and XL), which places the Pilot in 8th and overall list down to 16. Still, it’s hardly reasonable to include the new VW Atlas on the big list, as it’s only been available for two months, while the same brand’s Touareg is a $50k luxury SUV that competes in an entirely different class. This makes the Pilot eighth most popular out of 14 direct competitors (and no we can’t divide things up into five- and seven-seat challengers because Honda doesn’t offer a five-seat variant.

That’s an issue it will need to address, as class dominating Hyundai found nearly three times as many buyers for its five-seat Santa Fe Sport over the first half of 2017, while Ford’s five-seat Edge wasn’t far off the mark. And if you think things even out much more when comparing seven-seat SUVs, consider that Ford’s Explorer sold more than twice as many units, while Toyota’s Highlander, Dodge’s Journey, and Kia’s Sorento came close to doubling Pilot sales. Grinding salt into the wound, this is ramping up to be a particularly good year for the big Honda’s big SUV, with 4,079 units already down the road compared to 7,279 last year. Then again, Honda sold 8,230 in 2015 when the new model was introduced (in May), which while a massive bump over the 6,113 units sold in 2014 while the old model was winding down, and much stronger than the scant 4,328 sold during the model’s emotional low of 2007, is a big hill to scale in comparison to rivals. In other words, the Pilot significantly underperforms on the sales charts for such a mega brand.

It’s not like it’s suffering from new kid syndrome either. The Pilot has been around for a long time, 15 years to be exact, but the rather bland looking first-generation wasn’t exactly a homerun, and Honda’s second kick at the can, a boxy, upright, traditionally styled SUV was only moderately more successful.

Having previously tested a 2016 version in top-tier Touring trim, this is the second modern-day third-generation Pilot to be parked in my garage. Odd that Honda provided a Touring trimmed model once again, and stranger still that it coated both in the same grey-blue Steel Sapphire Metallic hue, especially when so many other colours are on the available palette, such as darker and bolder Obsidian Blue Pearl, dark green Black Forest Pearl, Dark Cherry Pearl, and all the usual shades from White Diamond Pearl, Lunar Silver Metallic, and medium grey Modern Steel Metallic, to Crystal Black Pearl.

Opting for the latter would have allowed perforated Beige leather upholstery instead of the same old Black hides, but it’s even more interesting to note you can’t get the lighter beige cabin with some of the complementary colours just noted (dark green and beige is a no-brainer). It must be difficult to select colour combinations knowing ahead they won’t appeal to everyone, but one reason top sellers perform well is the variety they bring to the market. Limiting the beige interior to those wanting a black exterior seems self-defeating.

Interestingly, Honda’s U.S. division forces those who purchase black Pilots into black or grey interiors, with beige totally off the menu, while those opting for the green or cherry red exteriors are mandated into beige. Either blue exterior paint removes black and beige from the equation entirely, leaving just grey, but at least more options are on the table. Such is life with a ten-times larger market, but then again a little more colour variety wouldn’t hurt the Pilot’s potential sales.

I won’t use the word austere, but even when Honda tries to bling up the top-line Pilot Touring’s cabin it uses yet more of the inkiest shade in the form of piano black lacquered plastic. There’s no warm wood tones, sophisticated satin-finished metals, or any as avant garde as the Nissan Murano’s radical mother of pearl inlays, and while I’m not decrying Honda goes that far to wow would-be buyers, something a bit more daring might be in order. That piano black lacquered plastic is impossible to keep free of dust, scratches easily, and looks passé in anything but a Rolls-Royce Ghost is another valid issue against this overused embellishment, the other being way too much of a “good” thing in its application here.

Where more is better is in seating, the Pilot standard with eight seatbelts, albeit the second-row captain’s chairs in our tester resulted in the usual count of seven seats from its three rows. I’ll let you in on the third row’s ability to haul more than just kids in my upcoming road test review, at which point all also be critiquing other considerations like roominess and comfort in the other seating positions, overall refinement, how well the configurable TFT instrument cluster and top-line infotainment touchscreen do their respective jobs, how much the full-load model’s optional nine-speed automatic improves the standard 280 horsepower 3.5-litre V6 engine’s performance and whether or not I’ve learned to appreciate its whacky electronic gear selector.

I can say the upgraded transmission is a win at the pump, with its claimed five-cycle fuel economy rating dropping to 12.4 L/100km in the city compared to 13.0 with the standard six-speed autobox; they both consume an estimated 9.3 L/100km on the highway.

You may also want to know that Honda now believes less is more when it comes to available Pilot trims, the Canadian version having lost its base front-wheel drive LX model, which also means the 2017 Pilot’s base price has climbed to $40,090 plus freight and fees instead of $35,490 last year. That new price is also $1,600 more than last year’s LX AWD, so Honda isn’t trying to spur more sales by slashing the Pilot’s MSRP.

Additional standard safety kit includes the usual four-wheel discs with ABS, electronic brake-force distribution and brake assist, traction and stability control, hill-start assist, trailer stability assist, tire pressure monitoring, and HondaLink Assist Automatic Emergency Response telematics, while items that were previously optional but are now standard include forward collision warning, collision mitigating autonomous braking, lane departure warning, lane keeping assist, road departure mitigation, and Honda’s exclusive LaneWatch blind spot display system that uses a rearward facing camera on the passenger-side mirror to project live video of the blindspot when activating the right turn signal. This is enough for an IIHS Top Safety Pick Plus rating, while the NHTSA gave it a best possible five stars for safety. My Touring trimmed tester includes blindspot monitoring with rear cross-traffic alert, but loses the LaneWatch system in the process, while the usual combination of airbags help to make the Pilot one of the safest SUVs on the road.

You can build on EX trim by upgrading to EX-L, which either comes with the name “Navi” or “RES” attached. Both feature an acoustic windshield, a heatable leather-wrapped steering wheel, an auto-dimming rearview mirror, front and rear parking sensors, satellite radio, a powered front passenger seat, leather upholstery, heated second-row outboard seats, one-touch folding second-row seats, a powered tailgate, and more, with the former incorporating navigation with detailed mapping into the infotainment display, and the latter anteing up with a rear entertainment system (hence RES) boasting a 9.0-inch ceiling-mounted display, two wireless headphones, a HDMI input, a 115-volt household-style power outlet, and second-row sunshades.

As you may have guessed, if you want navigation and rear seat entertainment you’ll need to move up to Touring, which as you can see from the photos incorporates a nice bright colourful map and full route guidance within the centre stack display as well as a flip-down TV monitor overhead, this latter item capable of Blu-Ray movies and neatly placed between a double-pane panoramic glass sunroof.

And I haven’t even mentioned a thing about what it’s like to drive. Come back soon for a complete road test review where I’ll cover that all-important issue as well as everything else experiential…