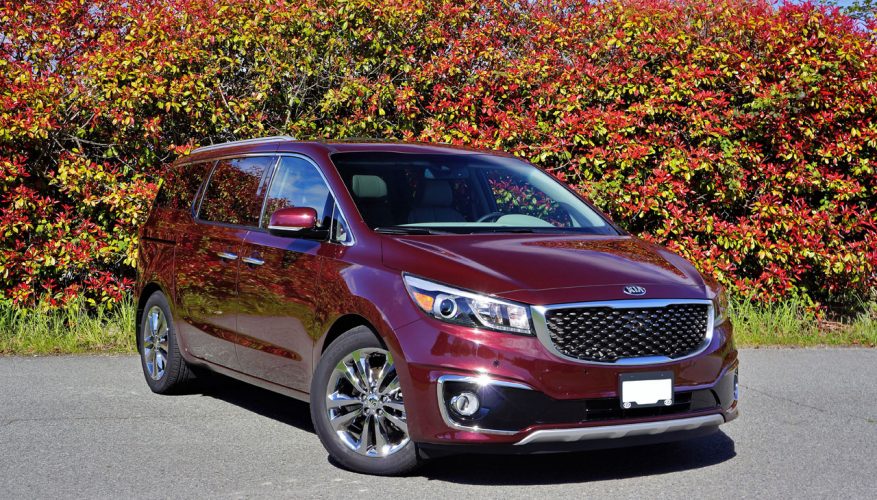 By: Trevor Hofmann
Regular readers will know I’ve got a thing about minivans. And no, I’m not talking about the usual ego-driven “I won’t be caught dead in anything so homespun” attitude that’s caused North American families to deviate from this most practical of motive appliances to far less utile car-based pseudo-SUVs in droves, but rather a true appreciation for monobox mobility with side-slider access. That the alt-mainstream brand Kia goes about the Sedona’s pragmatic duty with such a keen sense of urbane style is merely a bonus that I exploited during a recent weeklong test.

It helps that Kia gave me a luxury-lined SXL+ model, which is outfitted as nicely as most anything in the class. OK, it’s not as tarted up as a full load Chrysler Pacifica, but its as-tested $46,895 window sticker doesn’t shock the senses as much as the $58,480 2017 Pacifica Limited I put through its paces recently. To be fair, the Pacifica is probably worth the extra coin if you’re so inclined, but then again this Sedona SXL+ is worth every penny and more.

Unlike the all-new Pacifica, Kia’s minivan enters the 2017 model year with no new additions and one notable subtraction, the elimination of the SX trim line. Fortunately this year’s model doesn’t suffer from any lack of options, its available trims still including L, LX, LX+, SX+, SXL, and the just noted SXL+ model.

It’s an attractive van no matter the money spent, the Sedona’s long nose, bold yet elegantly simple grille, sporty fascia, low overall profile, and wide, solid stance making it look more like one of those aforementioned seven-passenger crossover SUVs than anything remotely van-like. Of course, my personal favourite two features, its side-sliders, give away its inherent practicality, but that’s about it.

All of its trim lines feature nice chromed exterior detailing, auto on/off projector headlamps, heatable body-coloured side mirrors with integrated turn signals, a rear rooftop spoiler, and splashguards at each wheel, while features like a tilt and telescopic multifunction steering wheel, powered front and second-row windows, display audio with satellite radio, a backup camera, Bluetooth, illuminated vanity mirrors, a conversation mirror, seating for seven, “Slide-n-Stow” second-row seats, and all the expected passive and active safety features come standard for just $27,995 plus freight and fees. This makes it Canada’s most affordable minivan by some $2,500, at least when comparing pre-discount MSRPs.

The $41,995 SXL adds HID headlights with auto-leveling and adaptive cornering, plus LED positioning lights, and projection fog lamps to the outside, as well as stainless steel door scuff plates on the way inside, and an enhanced LCD/TFT Supervision primary instrument cluster, an open and airy dual-panel panoramic sunroof, dual 110-volt household-style power inverters in the console and cargo area, impressively supple perforated Nappa leather upholstery, heat-relieving three-way ventilated front seats, more comfortable second-row luxury captain’s chairs that slide back and forth as well as side-to-side, with kick-out extendable leg rests no less, plus helpful front parking sensors, lane departure warning, and much more.

Unique SXL+ features include a nicer 8.0-inch infotainment touchscreen with very accurate navigation, a particularly useful 360-degree-surround parking camera, superb sounding Infinity eight-speaker audio with an external amp and sub, auto high beams that worked well, adaptive cruise control that made highway driving more relaxing, and autonomous emergency braking that I fortunately didn’t experience in a panic situation. This last feature helps it achieve IIHS Top Safety Pick status, by the way, something all of its Japanese competitors can’t claim and only the Pacifica exceeds.

I’m a bit of a sucker for refinement hence I like my minivans nicely finished, and to this end the top-line Sedona boasts plenty of soft touch synthetics in key areas, such as the entire dash top, much of the instrument panel, and the door uppers front to back, whereas the door inserts were covered in nicely padded stitched leatherette for a luxury look and feel. This level of premium-level pampering can’t be found in any of the Sedona’s Japanese competitors no matter how much you spend, with only the aforementioned Pacifica providing a similarly upscale environment.

It all comes together nicely too, with good attention to detail, especially the switchgear’s various buttons and knobs that are made from quality materials, are well damped, and fit together tightly, the three clusters of controls on the centre stack especially impressive. The intuitively designed top row provides quick access to infotainment functions, in case you’d rather have an analogue button to find your way around the touchscreen, one of which leads directly to the navigation interface that performed well, as noted earlier, but didn’t offer predictive city or street names when entering addresses, which was therefore a painstakingly slow letter-by-letter process.

As also mentioned, the upgraded stereo was excellent, but I found it strange the Sedona can’t be had with a rear entertainment system. I’m guessing most families don’t splurge for this pricey upgrade with other van makers, especially when a set of tablet holders strapped onto the front seatbacks will suffice at very little extra cost if you already own the tablets, but rear entertainment systems have been profitable upgrades within the minivan sector for almost as long as minivans have existed so it’s odd to find them missing from the options menu.

While the Sedona excels in passenger comfort, it’s a bit behind the pack regarding interior versatility. Like most vans in the segment, the third row of seats folds flat into the floor, but the second-row seats in my top-line version couldn’t easily be removed or folded flat. For this reason I personally wouldn’t opt for the SXL or SXL+, as much as I like these trims’ many added features. On all trims below, Kia includes its aforementioned Slide-n-Stow second-row seats that smartly squeeze up against the front seatbacks when maximizing cargo space, so consider this when optioning out your Sedona. Of note, I like how Kia’s U.S. division separates the less practical second-row seats into a package, although they could go one step further by making them a standalone option as you’d still need to leave some appealing features (like the panoramic sunroof) off the menu. “Upgrading” to the fancier rear seats also means that second-row passengers lose their heatable cushions, which is clearly not worth it for ski/snowboard-bound families or those living in colder climates.

Also of note, despite a squared-off almost blocky rear design the Sedona isn’t quite as spacious as most rivals, with total interior space less than the Toyota Sienna, Honda Odyssey, and Chrysler Pacifica, although I’m not talking by much. In case you want to compare numbers, total Sedona interior volume measures 4,695 litres (165.8 cubic feet), while cargo space behind the last row is 960 litres (33.9 cubic feet), aft of the second row is 2,220 litres (78.4 cubic feet), and with the second row removed (good luck with that) is 4,022 litres (142.0 cubic feet).

Where the Sedona truly performs is on the road, thanks to a standard 276 horsepower direct-injected 3.3-litre V6 with 248 lb-ft of torque, this mated to a well-proven six-speed automatic with Sportmatic sequential shift mode. The SXL improves on the base 17-inch rims and SX+ model’s 18s by adding chrome-finished 19-inch alloys for a nicer look and better road holding, which helped it exceed expectations when the usual crisscrossing latticework of suburban streets opened up to the less predictable nature of two-lane backroads bordering delta rivers that surround my island home. I’m not going to go so far as to say the Sedona is the sports car of minivans, such a concept just plain silly, but it held its own when pushed hard, while its manual mode gearbox provided a modicum of driving pleasure, all things considered. Truly, I enjoyed the Sedona most when kept at a moderate pace, where its excellent ride and easy manoeuvrability combined for a comfortable, relaxing drive.

The Sedona should be relatively trouble-free as well, or at least the Kia brand is doing well lately. It managed to beat the entire industry in J.D. Power’s 2017 Initial Quality Study, and pulled off a top-five result in the same third-party analytical firm’s 2017 Vehicle Dependability Study when put up against mainstream volume brands (11 overall), which should give first-time Kia buyers some additional comfort. Then again, the Sedona is not individually recommended amongst minivans, Chrysler and Dodge tops in the first study, and Toyota, Chrysler and Dodge top-three in the latter.

Fuel economy is not its forte either, its five-cycle Transport Canada rating being 12.9 L/100km city, 9.5 highway and 11.4 combined. This leaves it behind the Sienna’s 10.9 city/highway rating and Odyssey’s even better 10.7 combined results, let alone the Pacifica that leads with 10.6 combined. Only the Grand Caravan does worse with a city/highway rating of 11.8. I suppose I’m splitting hairs because none of these vans vary all that much from best to worst, but suffice to say the Sedona holds no bragging rights at the pump.

I’d hate to leave this review on a slightly sour note, especially after a week well spent in such an impressive family hauler. From a practical perspective, the few dollars you might save each month when filling up are more than accommodated for during initial purchase, the Sedona costing thousands less no matter the trim chosen. And while it comes up a tad short on space and usability as tested, it’s more utile than most competitors in lesser trims when Slide-n-Stow seating is factored in, whereas its good looks, nicely finished cabin, strong performance, and better than average safety rating mean that it’s a lot more than just a value option. The Sedona’s excellent value sweetens the pot, of course, which should be reason enough to put it high on your list of minivan candidates.
©(Copyright Canadian Auto Press)
Car Shopping Tools