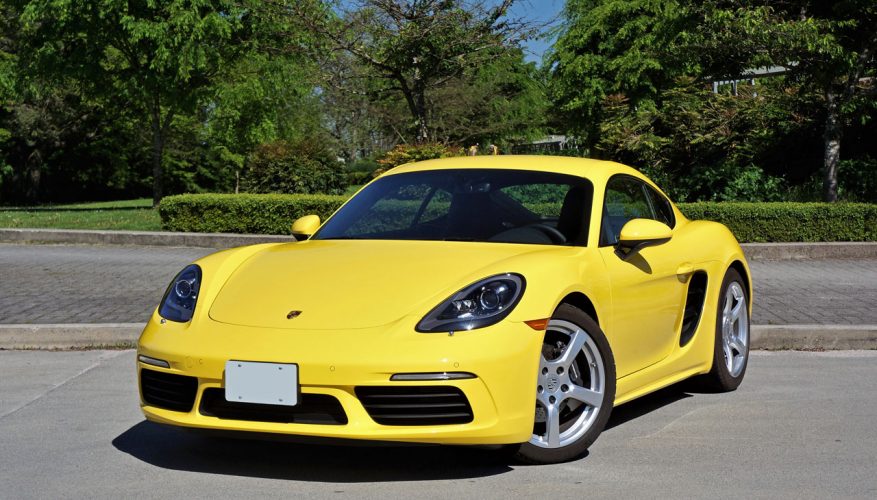 By: Trevor Hofmann
718? Well that’s different. Or at least it will be to all but ardent Porschephiles. If it were any other luxury brand I might be grimacing right now. After all, normally when a premium brand changes its model-naming scheme from creatively written monikers to alphanumeric drivel (like Mazda, Acura, Cadillac, and Lincoln did years ago-the latter brand just starting to embrace its past again with the Continental) I’m not in favour, but Porsche received a smiling thumbs up from yours truly when introducing 718 as the new model prefix for the 2017 Boxster and Cayman.

You see, Porsche has long used a mix of integers, letters and words in its naming process, sometimes only referring to numbers like the original 356, the 901 that followed, the 911, 912, 914, 924, 928, 944, 959, 968, and so forth. These three-digit number sets were actually internal codes, with those noted being the most common way for we the people to refer to each model as well. Others, like the Boxster (codes 986, 987 and 981) and Cayman (codes 987 and 981) siblings, plus the Carrera GT (code 980), are better known by their given names, whereas the Macan, Cayenne, and Panamera don’t have internal Porsche codes at all, because they’re based on shared VW/Audi (and now Bentley) platform architectures.

This makes Stuttgart’s decision to infuse some good old Porsche naming DNA into the Boxster and Cayman smart, as it ties these important entry-level sports cars more closely to the 911 Carrera they share some componentry with. See how I did that? I snuck “Carrera” into that last comment, another alpha name synonymous with the beloved 911 (and aforementioned supercar).

Now the 718 Boxster and 718 Cayman designations have a similar look and timbre as 911 Carrera (or at least that’s the concept), while the number chosen is an attempt to show familial ties to the fabulous mid-engine 550 Spyder and its 718 RSK successor that took motorsport by storm from 1953 through 1956 and 1957 through 1962 respectively.

I don’t know about you, but I’m willing to buy in to the marketing spin. After all, the original 718s were lightweight two-seat mid-engine roadsters (with a few coupes thrown in for good measure, and for higher track speed) powered by horizontally opposed four-cylinder engines, which pretty well sums up today’s 718 Boxster and 718 Cayman. Those spiritual predecessors were often dubbed “giant slayers” because the tiny, featherweight imps could out-manoeuvre their larger, more powerful opponents: ditto Boxster and Cayman. In addition, the many Boxster and Cayman models that have been stripped of their innards and stuffed full of roll cages, racing seats, fire extinguishers and the like, and then regularly contested in serious motorsport events gives them credence as true descendants of a much revered 718 progenitor.

Of course, simply take one for a spin around the block and you’ll immediately know for yourself. I recently did just that with a bright “Racing Yellow” 718 Cayman, and went one step better on the track with a 718 Cayman S just last week, so trust me when I say the mid-engine 718 Cayman is one of the best handling Porsches ever created.

Porsche even supplied my weeklong loaner with a six-speed manual… Yippee-ki-yay! Don’t get me wrong. I love the paddle-actuated seven-speed automated dual-clutch PDK too, and actually put it through its paces in the 718 Cayman S on the track. The non-S variant can hit 100 km/h in a mere 4.7 seconds with the Sport Chrono package added, while this manual is claimed to achieve the feat in 5.1 seconds. Not that you care, but the PDK gets an estimated 9.4 L/100km combined city/highway when driven more calmly and using standard auto start/stop, compared to 9.8. But we’re saluting the glory days of the mighty mouse 718 RSK right now, so it was only fitting to have a DIY gearbox along for ride with my road-going companion.

In reality, other than the aforementioned key points our luxury-lined 718 Cayman tester has little in common with the purposefully hollowed-out shell of a sports car that stole through the circuitous tree-lined Nürburgring Nordschleife in its heyday, but that’s just fine with me. While the thought of doing likewise on the legendary Eifel Mountains track (or any old racecourse for that matter) sends tingles up the spine, for everyday use an RSK would be ridiculously impractical and likely quite uncomfortable.

Purposefully designed for middle-aged derrieres like mine, Porsche smartly added plenty of pampering upgrades to a base 718 Cayman already replete with ample creature comforts, its end mission more likely focused on spirited trips to the office and memorable weekend getaways for two than any competitive track time (makeshift Sunday afternoon autocross courses aside), despite still being one of the best all-round sports coupes available today.

Above and beyond this, my tester added a $1,980 navigation module to the aforementioned infotainment system, $2,650 14-way powered sport seats with memory, and a $1,570 Premium package with rain-sensing wipers, auto-dimming mirrors, heatable seats, and dual-zone auto climate control. The wheels were upgraded to a set of $1,810 Cayman S rims as well, while Porsche added $1,510 torque vectoring (PTV) and $2,050 Active Suspension Management (PASM) to improve handling, as well as HID headlights with dynamic cornering capability (which are a prerequisite to the previously noted Premium package) for better night time visibility, the finally tally adding up to $74,320 before (always reasonable) freight and dealer fees.

Of course, the sky’s the limit when it comes to extras with this near-exotic brand, so go build one on Porsche Canada’s comprehensive online configurator and enjoy, although you might find it worthwhile to hang on until I finish telling you about my in-car experience, both on the road with the 718 Cayman and on the track with the 718 Cayman S.

First, I’d be remiss if I didn’t go on at length about the 718 Cayman’s impressive ergonomics and overall comfort. I know this is a sports car, but it’s one I could live with each and every day. What’s more, its build quality is stunning, with the best quality soft composite surfaces butting up against genuine aluminum trim and rich, supple leathers. All of the switchgear is brilliantly crafted too, the steering wheel exquisitely formed and shifter as elegantly minimalist to look at as it was sublime to use.

Yes, I could never tire of rowing through the 718 Cayman’s six forward cogs, the manual’s gears ideally spaced, its action fluid, and precision exact, while clutch take-up is equally engaging. The engine makes sensational sounds, even more so in S tune with optional sport exhaust switched on, the auditory note as revs climb and resultant speed making it feel like anything but a four-cylinder. I promise you won’t be complaining about the base engine lacking power, unless you start out by driving the S. You’d best figure out your budget and drive the one that best fits, as it would be self-induced punishment to fall for the more potent alternative and then be forced to take home the entry-level car. Then again, I’ve had them both for extended flings and I’d be plenty happy with the more basic powerplant, as it’s really an intoxicatingly fun sports car that pays proper respect to Porsche’s past.

I’d probably stick with the manual gearbox too, although the PDK is so very good that it’s tempting, especially when factoring in the congested city traffic I live with more often than not. I know I’m not alone in my grumbling, which is reason enough the autobox is chosen more often than not.

Something I appreciate almost as much as the 718 Cayman’s driving dynamics is its overall practicality, the little car incorporating two trunks and some useful cabin hideaways for stowing personal stuff. The front cargo compartment is extremely deep and totally capable of swallowing up gear, mine having been filled with computer towers, camera equipment including massive tripods, music recording gear, gym bags, and multiple bags of groceries at various instances throughout my test week. The rear trunk isn’t quite as commodious due to the engine housed just below, but it helps when needed and looks particularly fetching thanks to a satin-silver metal strut tower brace spanning the bulkhead.

Now that I’m talking practical qualities, Porsche is one of the highest rated brands in J.D. Power’s Dependability and Initial Quality studies, while the 718 Boxster is first and 718 Cayman third within their premium sports car category in ALG’s 2017 Residual Value Awards, so you’ll get more of your investment back when it comes time to sell.

Truly, the new 718 Boxster has it all covered. Stunning styling, phenomenal performance, a superbly crafted interior filled with top-tier features and state-of-the-art electronics, better usability than most of its mid-engine two-seat sport coupe peers, plus decent fuel economy. That it can be had for just $62,700 in base trim or $76,800 as the 718 Cayman S represents shockingly good value, the little Porsche worth every penny.