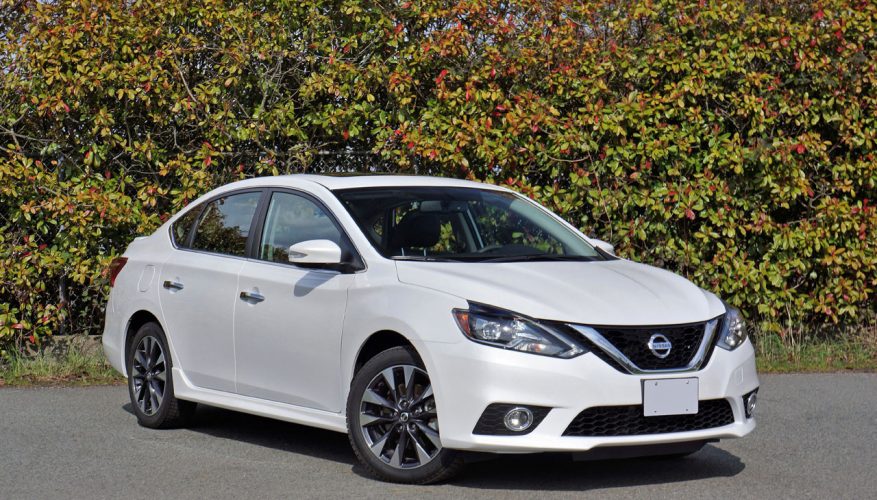 By: Trevor Hofmann
If you’d asked me last year to name the Canadian small car market’s most and least entertaining cars, I’d have put Nissan’s subcompact Micra city car and compact Sentra sedan on the respective lists. For 2017 the Micra remains a personal favourite in the cheap performer entry-level category, and much to my delight Nissan has elevated the larger Sentra’s fun factor times ten.

It wasn’t too long ago that Nissan’s Sentra SE-R was a highly respected sport compact, and while this once revered model is no more, the four-door-only Sentra can now be had in as-tested SR Turbo guise as well as top-line Nismo trim. I’ll leave the Nismo for a future road test review, because the SR Turbo is the car I most recently spent time with.

Before delving into this all-new 2017 trim, Nissan gave the entire Sentra line a thorough mid-cycle refresh for the 2016 model year that pulls its much more agreeable styling cues from other models within the Japanese brand’s lineup, particularly the Altima mid-size sedan. The most prominent change was the addition of Nissan’s now trademark V-motion grille in chrome and black mesh, extending upward into a new hood and downward into a revised lower fascia, while new complex headlamps included LED low beam projectors in SL and SR trims. Around the sides, new 17-inch machine-finished alloys with black painted pockets were added to the latter two trims as well, while all Sentras received new taillight lenses and a reworked rear bumper in typical mid-cycle makeover fashion.

All of this remains the same except for the elimination of less alluring SR trim and adoption of this SR Turbo nameplate for 2017, plus the engine and other performance tweaks that make it so fun to drive. The new 1.6-litre direct-injected four-cylinder gets borrowed from the already impressive Juke crossover, complete with 188 horsepower and 177 lb-ft of torque (up a sizeable 58 horsepower and 49 lb-ft of torque over the base 1.8-litre four). Even better, it can be paired with the as-tested six-speed manual gearbox or an available continuously variable automatic (CVT), both boasting unique tuning specific to SR Turbo trim.

I’m glad Nissan decided to equip this particular test car with the DIY mixer, as fewer and fewer vehicles are coming to market with manual shifters these days, especially in higher end trims, and even less arrive on the various manufacturer press fleets. The SR Turbo’s is a well sorted manual with short, smooth throws and a nice notchy feel, while the clutch is just right, not too light and not too heavy, providing good feel and feedback for performance driving.

Yes, you heard me right. I’m talking about a Sentra here. Nissan has finally heard the distant wailing and gnashing of teeth from disenfranchised sport compact buyers and anted up with a car that really delivers the driving goods, its high-revving turbo-four ideal for the Sentra’s size and weight. Power is smooth and linear with a noticeable surge when full boost is extracted, but not so much to upset the front wheels. In fact, I never noticed anything resembling torque steer, the steering feeling free from outward influences unless getting on full power with the wheel locked to one side, probably not a good idea anyway.

Nissan reworked the SR Turbo’s electric power steering for more direct response and feel, which is really noticeable, this aided by the standard semi-independent front strut and rear torsion beam suspension (its rear setup similar to the Corolla sedan’s, but not as sophisticated as the Civic sedan, Elantra Sport sedan, or Mazda3’s independent multi-link rear suspension design) upgraded with stiffer springs and dampers plus extra bracing for greater rigidity overall. This isn’t to say it feels harsh, but rather more like a traditional European sport sedan in that its ride is firm, yet with ample compliance for dealing with the types of day-to-day dips and bumps our country’s sometimes unkempt city roadways throw in our way. Any egregious frost heaves or potholes will send a shock through the system, but this is true with most any vehicle. The positive is a car that really feels hooked up through tight fast-paced corners, with wonderful balance, good transitional response, and excellent poise under hard braking.

To that end the SR Turbo gets larger 11.7-inch front ventilated sport brakes with upgraded pads (the base car gets 11s) and 11.5-inch solid rear discs (base gets drums), while its 17-inch machine-finished alloys with dark grey painted pockets are wrapped in 205/50VR17 all-season rubber. Full disclosure: my tester was still shod in a set of Michelin X-Ice winters when tested, which (despite these being excellent winter tires) meant it wasn’t quite as capable through the corners as it would’ve been with stock rubber, but this also made for a little more fun mid-curve thanks to a tendency to understeer when pushed hard, with the ability to throw it into oversteer when applying the appropriate steering angle and braking just right. In other words, this is a really fun car to toss around, and easily worthy of “four-door sports car/4DSC” status. I can hardly wait to try out the new Sentra Nismo.

Before getting my hopes up, it’s possible the powers that be in Nissan’s PR department ordered it with its optional CVT, which while most certainly a very capable transmission with manual mode (albeit no paddle shifters), won’t be anywhere near as enjoyable to pilot as its standard six-speed. It’ll be better at the pump, mind you, which is also true for the SR Turbo’s optional autobox that manages 8.9 L/100km city and 7.3 highway compared to 9.1 city and 8.9 highway for the manual version. To its credit that seemingly anemic base Sentra powerplant gets the compact segment’s best fuel economy at 8.1 L/100km in the city and 6.3 on the highway when mated to the CVT, or 9.0 city and 6.8 highway with the standard six-speed manual.

I’m not going to go into every trim level being that this review is for the SR Turbo, a very different type of car targeting a more performance-oriented buyer, but take note that S and SV trims offer a little more enjoyment from the base engine thanks to their standard six-speed manual gearbox, whereas the more efficient CVT is available with SR Turbo and Nismo trims as well, and comes standard on the luxury-focused SL.

Diving right into the SR Turbo, which starts $5,800 higher than the base $15,898 S at $21,598 plus freight and fees, the equipment list includes all items mentioned thus far as well as fog lamps, active understeer control (when you “upgrade” to the CVT), LED turn signals integrated within the side mirror housings, side rocker extensions, a rear deck lid spoiler with an LED centre mounted brake light (CHMSL), a sport rear fascia with a matte black diffuser-style centre insert, a chromed exhaust tip, and more on the outside, giving it a tastefully sporty look that should appeal to most demographics.

Of course, this all gets added to myriad features pulled up from lesser trims, but take note if you’d like your Sentra with enough active safety gear to qualify for IIHS Top Safety Pick Plus status, which it does, such as emergency autonomous braking and adaptive cruise control, you’ll need to step into a less powerful CVT-only model.

Back to the changes that came with last year’s car, this 2017 Sentra carries forward all interior updates such as its more refined surface treatments that now make generous use of soft-touch synthetics and metallic accents, while that sporty three-spoke leather-wrapped steering wheel just mentioned was inspired by the 370Z and therefore is a lot better looking due to a reshaped centre hub and side spokes (it’s no longer a big ugly blob) and less crowded multifunction controls. A vertical 5.0-inch colour TFT multi-information display within the primary gauge package looks good and gets filled with ample functionality for this class, but I must say it’s almost as large as the just noted 5.8-inch infotainment touchscreen on the centre stack, which while packed with features wasn’t quite up to snuff compared to some competitive systems. On the positive, new trims were added to the centre stack and doors for all Sentras last year, those in my SR Turbo particularly nice.

Before signing off I’ll mention one of the Sentra’s greatest attributes, its accommodating passenger compartment and massive 428-litre (15.1 cubic-foot) trunk. Standard 60/40 split-folding rear seatbacks aid fitment of longer cargo, making the Sentra SR Turbo as easy to live with as it’s fun to drive.

I don’t know if a sportier Sentra will help drive more sales, the car’s bottom line ledger performance not as impressive as this SR Turbo’s street capability here in Canada, but hopefully this model, along with the Nismo, will cause some potential buyers to take notice and slowly pull them back to Nissan’s camp. Most competitors have the advantage of multiple body styles, hatchbacks particularly strong here, whereas the Sentra is only available as a four-door sedan. This works well in the U.S. where its 112,574 YTD (as of June 2017) sales placed it third behind 175,763 Honda Civics and 165,596 Toyota Corollas (including the iM), but the popularity of these two frontrunners is partly due to the multiple body styles just mentioned. Nissan will want to address this by bringing something along the lines of the Euro-spec Pulsar to both markets. They could start by launching it in Canada, following the highly successful Micra formula, which it did previously by bringing the old Xtrail here ahead of the first-generation Rogue.

Until then we can enjoy the new Sentra SR Turbo and its top-line Nismo sibling for what they are, entry-level sport sedans designed to put smiles on their owners’ faces every time they get behind the wheel. Nissan is on the right track with this car. Onward and upwards.
©(Copyright Canadian Auto Press)
Car Shopping Tools