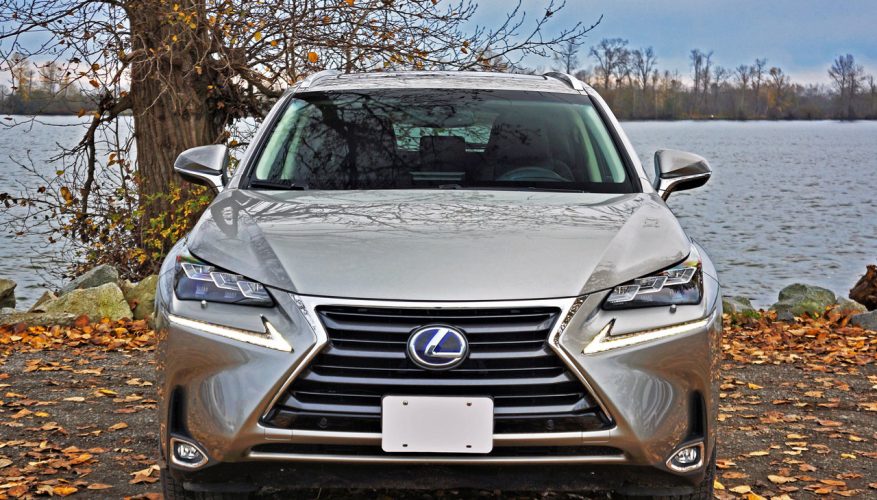 By: Trevor Hofmann
Amazingly, Lexus went from having nothing in the compact luxury SUV segment throughout most of 2014 and prior, to being one of the top-three players by the end of 2016. The story is even better in the U.S. where the new NX is now number one in the entire class.

That, of course, makes it top dog in the northernmost North American jurisdictions by default, with combined U.S./Canadian sales of 61,179 units compared to 60,048 Acura RDX deliveries. Where were Mercedes-Benz, BMW and Audi? The four-ringed brand was third with 57,863 Q5 sales (that being the old first-generation model that’s since been replaced), Mercedes’ new GLC fourth with 52,562 units, and BMW’s X3 fifth with a total of 49,613 buyers.

How the mighty Germans have fallen, not that Lexus is particularly weak and feeble. The Japanese luxury brand is a powerhouse in the crossover sport utility sector where its RX has been the bestselling mid-size luxury SUV in both Canada and the U.S. (by a long shot) for as long as there’s been a mid-size luxury SUV segment, a vehicle class it helped to create. Therefore it only makes sense the NX would do well too.

It helps that it looks fabulous, or at least I happen to like it a lot. It’s a polarizing design that’s as often maligned as lauded, but the only thing that might be more offensive in this premium camp is bland sameness-obviously not an issue for the NX. Its design hasn’t changed one iota since arriving in December of 2014 as a 2015 model. Lexus didn’t wait long before getting this hybrid variant to market either, joining it up with the NX 200t for the model’s inaugural year and making it an important part of its one, two compact luxury SUV knockout punch ever since.

Its market prevalence is even more significant now that the renewed Audi Q5 is not yet available in hybrid guise, the NX 300h currently an anomaly within the compact luxury SUV category. In fact, Audi also canceled the Q5 TDI and there’s currently no turbo-diesel with Mercedes-Benz’ new GLC, plus BMW’s X3 xDrive28d, which was available earlier this year, is no longer configurable on the brand’s Canadian retail site, which means the only alternative-fuel competitors in this class are Jaguar’s new turbo-diesel F-Pace 20d and Land Rover’s even newer 2018 Range Rover Velar D180 that uses the same base engine (and why the Discovery Sport doesn’t as well is anyone’s guess, so it may be coming).

Of note, GMC’s upcoming 2018 Terrain Denali (which will likely be priced high enough to qualify for compact luxury SUV status if the current 2017 model is anything to go by) will receive turbo-diesel power, so it could find itself in the mix, but being that Dieselgate appears to have ruined Rudolf Christian Karl’s most fuel-efficient internal combustion engine (ICE) type, the majority of environmentally oriented consumers won’t be turning to diesel as a way to save the planet anyway, leaving the NX 300h (until the upcoming Q5 Hybrid and Volvo XC60 T8 Twin Engine plug-in hybrid arrives, plus others no doubt get added) as the only real green choice in this burgeoning market segment.

Behind the NX 300h’s bold spindle grille is the same ultra-clean powertrain as the new Toyota RAV4 Hybrid and Lexus’ ES 300h, comprised of a 150 horsepower gasoline-fueled 2.5-litre four-cylinder Atkinson Cycle ICE with 152 lb-ft of torque driving the front wheels and a 50 kW (67 horsepower) permanent magnet electric motor powering the axle in back, the energy for the latter sourced from a rear-mounted nickel-metal hydride battery that gets recharged via the ICE as well as regenerative braking.

When topped off it has the ability to drive solely on EV power for short distances at low speeds (bumper-to-bumper traffic, parking lots, etcetera), but most of the time it merely assists the ICE for improved performance and reduced fuel consumption. A specially designed continuously variable transmission (CVT) takes care of shifting duties, of sorts, the full result of Lexus Synergy Drive’s combined forces being 194 net horsepower and the same 152 pound-feet of claimed torque (although it feels like a lot more and could very well be-Lexus tends to err on the side of conservatism).

More importantly the NX 300h is good for estimated fuel economy equaling 7.1 L/100km in the city, 7.7 on the highway, and 7.4 combined, which is far and away the best in its class (the F-Pace diesel achieves 8.1 combined city/highway).

Along with its EV mode, the NX 300h features three selectable drive modes including Eco, Standard, and Sport, these focused on maximizing efficiency or power rather than changing steering and suspension settings. To that end, if you’re looking for a performance SUV I’d recommend the NX 200t F Sport, as it delivers more zip off the line and more zag through the corners, but that’s not to say the NX 300h is a slouch at takeoff or particularly cumbersome.

I’d be tempted to upgrade its wheel and tire package to the $2,650 19-inch F Sport alloys in the accessories catalogue, mind you, as this hybrid variant is biased more toward comfort than any aggressive behaviour. It’s shod in 18-inch alloys circled by 225/60R18 all-seasons, which together with a nicely sorted MacPherson gas strut and double wishbone fully independent suspension, complete with stabilizer bars at both ends, combines for plenty of compliance that results in excellent ride quality. It manages corners well enough too, providing you don’t get silly, its Dynamic Torque Control-enhanced E-Four AWD amply adhesive to dry pavement or any number of slippery surfaces, but it’s not about to compete head-to-head on a twisting racetrack with any of the Germans, the aforementioned F-Pace and Velar, or for that matter Porsche’s Macan. Again, leave such performance feats to the NX 200t F Sport, this 300h more about saving at the pump and clean living.

By nature of its hybrid powertrain the NX 300h is a niche model when compared to the more conventional NX 200t, so therefore Lexus’ Canadian division limits trims to just one and options packages to the singular digit as well. Standard trim, which starts at $54,350, is generously equipped with exterior features including the 18-inch rims and rubber just mentioned, plus LED low-beam headlights with washers, LED DRLs, LED clearance lamps, LED fog lights, LED taillights, aluminum roof rails, a rear rooftop spoiler, auto-dimming power-adjustable heated side mirrors with integrated turn signals and memory, proximity access, and more.

The driver’s seat was comfortable in the usual Lexus way, although the powered lumbar support is just two-way in and out, not up and down, so if it doesn’t fit the small of your back you’re out of luck. Fortunately the basic seat design fit me well enough without the need for extra pressure in the SI joints, so I was able to tool around town all week quite happily.

Speaking of missing parts, I was a bit surprised this top-tier 300h didn’t have a panoramic sunroof, a de rigueur component of premium and even loaded mainstream branded SUVs these days, while rear outboard passengers don’t get the benefit of heatable seats either. In fact, other than the Premium package the only options are four available exterior shades and one colour (new Blue Vortex Metallic) plus Black or no-cost Flaxen brown/beige NuLuxe pleather upholstery with the base model, the alternative seat coverings with the Premium package being a darker Saddle Tan leather. Yes, the lovely rich Matador Red Mica from last year’s NX 300h tester is history, but I must say I quite like this year’s taupe-toned Atomic Silver-although I would’ve chosen the Saddle interior.

No matter the cabin motif you should be satisfied with interior quality, especially with the Executive upgrade. Most surfaces above and beside the hips are soft touch, much of it contrast stitched padded leatherette for an extra level of premium pampering. The lower door skins are hard shell plastic, which flies in the face of most of the European entrants, but Lexus goes the extra step of trimming each side of the centre stack and lower console in the same padded leatherette, which is a big step up from the status quo.

Of note, minimalism isn’t Lexus’ thing, but most of the myriad switchgear is first-rate, especially the steering wheel stalks and power window rockers, whereas the graphic interfaces within the primary instrument cluster and hovering atop the centre stack, the former a 4.2-inch TFT multi-information display and the latter a 7.0-inch fixed tablet-style screen, provide crisp, clear resolution, excellent depth of contrast, and nice bold colours, while the systems within won’t leave you wanting for functionality. The former was enhanced by a useful head-up display that projected quick-access info on the windscreen, while the latter boasted all the usual audio, media, phone, car info and system setup features within, plus extremely accurate navigation and an ultra-clear backup camera. The 10-speaker audio system wasn’t upgraded with Mark Levinson branding, which is Lexus’ top-tier partner in sound, but it provided impressive audio quality just the same.

Even better than the infotainment system itself is the NX’ Remote Touch Interface used to control it, which incorporates the newer touchpad instead of the old-school joystick. I know this won’t be to everyone’s liking, but I spend most of my time on a laptop and therefore a touchpad comes naturally to me, this one even including the tap, pinch and swipe gesture controls most of us have become accustomed to from our laptops, tablets and smartphones.

All of this luxury goodness comes in a passenger compartment that’s identically sized to the conventionally powered NX 200t, which means you won’t lose any seating space when moving up to the hybrid. Cargo volume is impacted, however, albeit ever so slightly with a 25-litre (0.9 cubic-foot) reduction no matter if the 60/40-split rear seatbacks are upright or lowered, the measurements reading 475 litres (16.8 cubic foot) and 1,520 litres (53.7 cubic feet) respectively. Similarly the gas tank loses four litres to a new total of 56 litres, but due to the NX 300h’ aforementioned fuel economy you truly won’t need as much.

At the end of yet another test week with Lexus’ most efficient NX I’m left with mixed feelings. I would’ve enjoyed a more connected feel to the road, and with that greater performance, but I was thrilled with the significant reduction at the pump when it came time to fill up. The NX was oh-so wonderfully quiet, comfortable and refined too, making for seven mostly stress free days of motoring. It’s certainly not difficult to recommend the NX 300h or its more performance oriented NX 200t sibling. Choose wisely.
©(Copyright Canadian Auto Press)
Car Shopping Tools