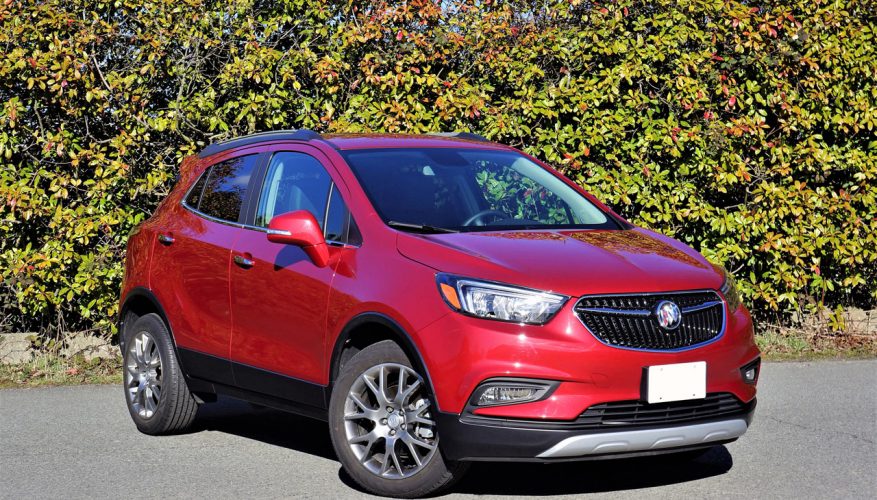 By: Trevor Hofmann
Each time I schedule a Buick Encore for testing I don’t give it much thought. It’s a subcompact SUV that needs to be covered because of its reasonably strong sales, but it’s not the type of vehicle that elicits a lot of passion. And then once inside I’m reminded of how nice it is, and on the way home how easy it is to drive.

I must say it’s even better for 2017. GM just gave it a thorough mid-cycle update including a much more attractive modernized grille, headlights and taillights filled with LEDs, the removal of those silly hood-mounted “ventiports”, and of course new wheels all-round, while its interior gets a number of styling and technical enhancements too, plus it continues to drive very well.

My tester came in near-base Sport Touring trim with few options so it featured the standard 138 horsepower 1.4-litre turbo four with 148 lb-ft of torque, and was only configured to drive the front wheels as tested-AWD is a reasonable $2,000 option across most of the line. With traction and stability control now standard on every car sold into Canada it’s not as important to upgrade to AWD as it once was, making this FWD Encore a relevant four-season conveyance in all but our most remote rural market sectors.

It’s quicker off the line than you might expect from such a diminutive engine, this thanks to 100 percent of its twist coming on at just 1,850 rpm and a featherlight (for an SUV) curb weight of only 1,468 kilos (3,237 lbs), but if you really want more jump off the line the optional 153 horsepower version of the same engine (codenamed LE2) can be had in FWD or AWD for just $1,030, and provides auto start/stop to temporarily shut the engine off when it would otherwise be idling.

Both engines utilize a nicely sorted six-speed automatic transmission with manual mode, the latter probably best left on its own although capable of being manually actuated via a thumb rocker switch atop the otherwise leather and metallic shift knob, with smooth and precise shift intervals for a good balance between comfort and sport.

Likewise the suspension is very compliant, just as anyone who’s experienced a Buick would expect, and the cabin is particularly refined and quiet for such a small SUV, but at the same time the little Encore provides a level of agility that defies its tall, narrow body, easily darting in and out of traffic and a lot of fun on the open road, especially somewhere remote and winding. Like I said, the Encore is one of those vehicles that might not elicit passion at first sight, but is a real joy to live with.

Considering the original 2013 Encore hit the road at $28,680 and last year’s version had a base sticker of $28,505, you might find it surprising that pricing for this new and improved 2017 Encore starts at just $23,495, which is only $3,500 more than its somewhat less appealing Chevrolet Trax cousin. Buick is a brand that’s nudging up against premium after all, and the Encore makes this clear by providing an upgraded cabin with fabric-wrapped A-pillars, plus a soft touch dash top and pliable synthetic door uppers front and back. Even nicer, an attractive contrast stitched leatherette instrument panel pad stretches from the left side of the primary gauge cluster, underneath the infotainment system, over to the right side of the front passenger. Some nice shiny grey metallic trim is placed just below, while plenty of aluminized and glossy piano black lacquered trim adds style.

The lower surfaces are all hard and durable, normal for this class, and Buick didn’t finish this model’s overhead console as nicely as it could have either. No sunglasses holder is included, and the reading lights are incandescent instead of LEDs, actuated with big sloppy buttons. I like the fabric-wrapped sunvisors mind you, these fitted with individual mirrors that are large and well lit.

Getting past the materials used, it’s the overall design of the interior that will cause a second glance. Ahead of the driver is a redesigned gauge cluster with a bright, colourful 4.2-inch reconfigurable TFT multi-info display as standard, while the pod-like centre stack of the old model has been replaced with a cleaner, simpler design topped off by a very large standard 8.0-inch infotainment touchscreen featuring an updated Buick IntelliLink digital interface that now includes Android Auto and Apple CarPlay for enhanced smartphone connectivity.

Buick adds ample USB ports for charging devices, but a glance down the centre stack to the climate control interface shows a rudimentary manual system that seems out of place in a wannabe premium brand, especially being that it’s surrounded in big plastic dummy buttons. The six empty buttons get filled as options get added, and the entire interface is upgraded to dual-zone automatic for another $405 in this trim or as standard kit in the Essence and top-line Premium models, but even with a splash of chrome around its dials the HVAC interface doesn’t look like anything from a luxury brand the way it is.

Overall, the cabin is well laid out for four adults in comfort, or five in a pinch. I’m guessing the driver’s seat would be a bit narrow for larger folk, but it fit me quite well, even holding me in place during hard cornering thanks to surprisingly robust side bolstering, while providing good comfort and excellent lower back support throughout my test week.

The upholstery in my Sport Touring tester was a mix of contrast-stitched leatherette and textured cloth, the bolsters done in the former and the seat inserts in the latter. Oddly, Buick chose not to include heated front seats in this trim, the just noted Essence and Premium being the only Encore models to get seat warmers despite five available trims. The Sport Touring was therefore devoid of a heatable steering wheel as well.

It was a nice sporty leather-wrapped wheel, however, giving the Encore more of a performance car feel, and I really appreciated the reach of the telescopic column that moved back and forth about three to four inches, allowing me to find the ideal driving position. The controls on the steering wheel and nice metallic finishings are well done, although the former could use a little better damping as they wiggle around a bit. Then again they were tightly spaced, and the rubberized rocker switches on both sides are very nicely finished and quite grippy.

To be fair, we’re talking about an SUV with an asking price of just $27,895, and for that it gets everything included in the base model, which already comes with the features mentioned earlier as well as standard proximity-sensing access with pushbutton ignition (optional with most competitors), a six-way powered driver’s seat, and electronic noise cancellation that helps keep Buick’s renowned “Quiet Tuning” as hushed as ever. Another standard feature worth noting is integrated Wi-Fi via 4G LTE internet connectivity, capable of turning this little subcompact SUV into a rolling hotspot.

The standard Encore list goes on with features like cruise control, a backup camera with dynamic guidelines, decent sounding six-speaker audio, Bluetooth phone connectivity with audio streaming, satellite radio, plus all the usual active and passive safety features as well as the rather unusual yet welcome addition of ten standard airbags incorporating front knee blockers and rear seat-mounted side-impact bags.

Even better, the usual standard 60/40 split-folding rear seatbacks, which incidentally expand the rear cargo area from 532 litres (19 cubic feet) to 1,370 litres (48 cubic feet) when laid flat, get expanded upon further by a flat-folding front passenger seat that makes it possible to load in really long items. There’s front passenger underseat storage too, plus a storage tray under the rear floor. Add it all up and you get a lot for just $23k and change.

Or at least that’s what I thought before I started delving deeper. Seriously, I’m not sure how Buick can explain the existence of its second-rung Preferred trim, because its substantive $2,500 price hike merely buys you carpeted floor mats and a cargo cover. I went back and forth over Buick’s online pricing configurator and detailed specifications and not one additional upgrade gets mention, with even the alloy wheels being identical. The only real benefit that comes with the move up to Preferred trim is the ability to pay more for options and accessories that can’t be had with base trim. In other words, I’m now realizing the base model is a loss leader designed to get you into GM’s dealership in order to be upsold to a pricier model. I’m not saying you couldn’t potentially purchase the base model, so if you happen to like black or white and don’t want any factory options it offers up great value.

Yes, as nicely tarted up as the base Encore is you can only get it in standard Summit White or $495 Ebony Twilight Metallic black with an Ebony black interior, and then Buick will only sell you a $150 oil pan heater, a $130 custom moulded cargo tray, and/or a $20 front license plate mount with this trim-there’s not even an option for a factory block heater, so no one living in one of Canada’s colder provinces need apply.

Therefore, if you want the choice of nine exterior shades and colours before adding the option of Shale beige upholstery you’ll need to go with the Preferred upgrade, which also allows you to get truly fancy goodies (tongue fully in cheek) like a $65 wheel lock kit, a $70 carpeted cargo mat, $80 cargo net, $195 all-weather floor mats, $305 accessory carrier mount, $355 roof rack cross rails, or an $580 front footwell and cupholder lighting kit (again, no block heater available). Seriously, I don’t know what Buick is up to with these shenanigans, but you’d be better off buying the base model and getting all this stuff from the parts department or, better yet, an aftermarket supplier like Amazon.

More on point, the Sport Touring model tested adds fog lamps, unique 18-inch alloys, remote start, and a rear rooftop spoiler, which once again seems like a pretty skinny upgrade package for the additional $4,500 over base, much of this probably available from the parts counter as well. Notably, Sport Touring trim allows you to upgrade to the more powerful engine mentioned earlier, AWD, and/or more options such as my tester’s $680 Safety package featuring blindspot monitoring with rear cross-traffic alert. Together with its $495 Winterberry Red Metallic paint my Encore Sport Touring tester hit the street for $29,070 before freight, dealer fees and taxes, which is still pretty reasonable despite the unnecessary rigmarole needed to get to this point (I like more straightforward-read honest-pricing like Honda). At least GM was showing a pretty sizeable no-questions-asked discount at the time of writing, which I’m guessing you can get down further.

Other features allowable with the move up to Sport Touring include a $150 block heater (meaning Sport Touring trim is the base Encore for most of Canada), the aforementioned $405 dual-zone auto climate control, $795 navigation with detailed mapping, $515 seven-speaker Bose audio, an $1,100 powered moonroof, and a $265 Protection package including front and rear all-weather floor mats and an all-weather cargo mat.

I’m not going to go over all the standard and available features in Essence or Premium trims, but suffice to say they can be outfitted at a much higher level, with those aforementioned heatable seats, a powered front passenger seat, driver’s memory, leather upholstery, a heated steering wheel, rain-sensing wipers, an auto-dimming rearview mirror, front and rear parking sensors, forward collision alert, and lane departure warning, plus of course they’re priced accordingly, with the a fully loaded Encore Premium listing at $40,210.

Of course, at this price point there are a lot of premium-badged options, even including Buick’s own larger compact Envision. On that note I’d recommend sticking with a lower end Encore as it represents reasonably good value, especially that base model if you can find one. It’s an SUV that may not initially elicit much excitement, but will likely earn your admiration and respect as the miles add up.
©(Copyright Canadian Auto Press)
Car Shopping Tools