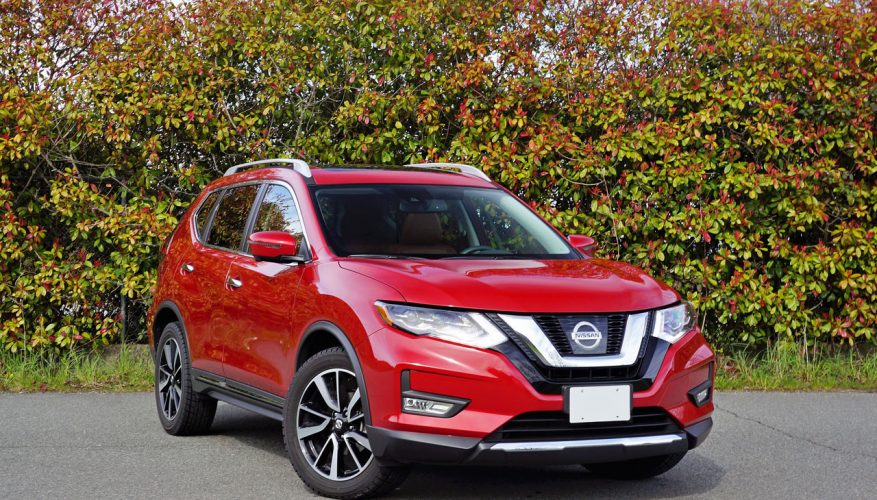 By: Trevor Hofmann
Just one look and you’ll know why the Nissan Rogue sells so well. Its design is ideally balanced between sporty and elegant, with just enough rugged truck-like SUV presence to beef up what’s actually a sleek and efficient car-based crossover.

How popular is it? For years the Ford Escape was number one in Canada’s compact SUV category, but that ended when 2016 came to a close and Toyota’s RAV4 took over the top spot, and then after the first two months of 2017 Honda’s recently redesigned CR-V bumped the RAV4 off its pedestal, only to be knocked off by Nissan’s new Rogue in March. By the close of May it was all topsy-turvy again, with the RAV4 up top, CR-V second, Escape third and Rogue fourth, although not many deliveries separate these hotly contested compact SUVs from each other. Every other competitor seems to drive off the sales cliff in comparison, with the majority in four-digit territory.

Truth be told, any one of these top-four compact SUVs would be a good bet, but respect should be given to Nissan for pulling the Rogue up by its britches with this latest mid-cycle refresh, and by so doing it has created a compact SUV that North American consumers like even more than its popular predecessor.

Speaking of North America, drive across the 49th parallel and it’s an entirely different story with the Rogue in first place by a wide margin. This, by default, makes it the category’s bestseller in North America. Why does being number-one matter? If you remember the once-popular TV game show “Who Wants To Be A Millionaire”, the most accurate answers always came from the audience, and those who vote with their wallets are even more likely to be right.

The Rogue is Nissan’s biggest seller in both markets and therefore its most important model, so expect the Japanese automaker to keep piling on the upgrades year after year, while it continues to pull out all the stops in marketing, pricing, and layering on incentives to keep it numero uno.

Of critical importance to its rise in popularity is the refresh just mentioned, which updates styling, improves interior refinement, modernizes technologies, and adds a host of active safety features. Visually, the Rogue moves into 2017 with mostly the same flowing sheet metal as before, but its V-shaped grille has been flattened into more of a “U” and then trimmed out in more detail so as to simultaneously toughen up and sophisticate its image, plus its headlight clusters get more complexity along with quad beams and unique LED DRL signatures, and its lower front fascia is likewise given more intricate detailing along with horizontal LED fogs in uppers trims.

Changes down each side and in back are more subtly applied, the former including chrome mouldings adorning the otherwise matte black rocker extensions, and the latter including revised LED taillights and a reshaped bumper featuring a bolder black cap that protrudes outward and upward from below, once again giving this crossover SUV a bit more rugged truck-like appeal.

Lastly, all Rogue trims get new wheels that seem inspired by its larger mid-size Murano sibling, including 17-inch steel rims on the base S, 17-inch alloys on the SV, and 19-inch alloys with black painted pockets on the top-line SL. New colours often make just as dramatic a change without nearly as much expense, so therefore Nissan gives 2017 Rogue buyers the option of Caspian Blue, Monarch Orange, and our tester’s stunning Palatial Ruby, plus a bevy of hues carried forward from last year’s model.

Moving inside, Nissan has updated the Rogue with a new flat-bottomed steering wheel rim that provides greater space for the driver’s legs when sliding in and out and looks pretty sporty to boot, while it’s now heatable in upper trims. The shifter’s leather-clad boot is new too, plus the Rogue can now be had with remote engine start as well as memory for the driver’s seat and side mirrors.

As for refinement, the new Rogue certainly delivers a more premium look and feel inside, important being that all competitors have steadily been improving their interiors as well. A soft touch dash top extends downward into the instrument panel, the latter portion of my top-line SL Platinum AWD tester finished in stitched leatherette on a nicely padded backing ahead of the front passenger. The front door uppers are soft synthetic as well, while Nissan finished the armrests in the same saddle brown as the dash insert front to back, and of course the leather seat upholstery also gets the colourful treatment with a little black on the bolsters for a classy two-tone motif. It makes for a rich looking cabin, especially when contrasting my tester’s aforementioned ruby red metallic paintwork, while other interior highlights include glossy piano black inlays and tasteful brushed metallic trim with splashes of chrome.

My top-tier loaner featured a large colour TFT multi-information display between its otherwise analogue primary gauges, plus a reasonably sized 7.0-inch infotainment touchscreen over on the centre stack that comes complete with a very useful backup camera that actually splits in two to show the usual rear view with active guidelines as well as a top view with 360-degree surround visuals. Additionally, the navigation system provided accurate directions via clear, detailed mapping. It even took us via the quickest route, and by so doing reminded me of alternative choices I hadn’t used for a long time.

One of the benefits the Rogue has over some of its competitors is interior spaciousness. It’s slightly longer than the average compact and provides a longer wheelbase for additional rear legroom. The rear seat moves back and forth plus reclines, and of course folds completely flat in the usual 60/40 configuration too, although the way Nissan incorporates the centre folding armrest makes for a rear seat pass-through that could easily accommodate long items like skis while two outboard passengers enjoy greater comfort.

At 1,112 litres (39.3 cubic feet) there’s a bit more cargo space behind those rear seats than the second roomiest of the four competitors mentioned, but that advantage disappears when the seatbacks are folded down. In fact, at 1,982 litres (70.0 cubic feet) with all seats laid flat it becomes third most spacious on this list, but we’re really talking small differences here. What might be more important to would-be owners is ease of operation, or lack therefore when compared to the CR-V, per se, which merely needs a tug on cargo wall-mounted levers for the rear seats to automatically fall flat, the Rogue requiring a less convenient manual process via latches on the upper backrests.

Something Rogue buyers can brag about, mind you, is a “Divide-N-Hide” partition shelf that lets you stack cargo in tiers for better space utilization, almost doubling floor space if your cargo will fit. For taller items, simply remove the shelf and slide it into position on the floor. Of course, a retractable cargo cover is also included.

The Rogue isn’t the most energetic SUV in its class at 170 horsepower and 175 lb-ft of torque, these numbers a little stronger than some rivals and not quite as potent as others. What’s more, Nissan makes a fuel economy-focused continuously variable transmission (CVT) standard, which I think works ideally for this class. It’s smooth, reliable and more efficient than some of its peers’ conventional automatic transmissions. Clearly, superior performance in not exactly high on compact SUV buyers’ priority lists, comfort is, and the Rogue delivers that in spades. Certainly it’s quick enough off the line and provides strong passing power on the highway, with the focus once again on smooth, linear straight-line performance.

I found the Rogue especially pleasurable around town, where its compliant suspension and overall agility made for an easy vehicle to drive through traffic. It rides on a fully independent suspension setup with the usual MacPherson struts up front and multi-link design at the rear, plus stabilizer bars at both ends, and I must say it all works flawlessly on the open road as well. The Rogue bends into fast-paced corners with confidence and more importantly leaves those curves behind safely thanks to a controlled, stable stance that’s eased along via plenty of standard active electronic safety components working in harmony with nicely sorted mechanical underpinnings. On that note the SUV’s four-wheel disc brakes lend well to its straight-line and handling characteristics too, the Rogue truly living up to Nissan’s sporty brand heritage, albeit with an overall leaning toward smooth comfort. It therefore should satisfy all but serious performance fans. Of course, those seeking an SUV with pavement-scorching capabilities should look to a premium brand like Infiniti.

Three unique Nissan technologies that help deliver the type of even-keeled performance that mainstream compact SUV buyers appreciate include Active Ride Control that uses the engine and braking system to deliver a smoother driving experience by moderating the fore and aft pitching motion often caused from bumpy road surfaces; Active Trace Control that aids handling confidence by automatically applying braking pressure to each wheel in order to maintain a chosen cornering line and smoothly keep control; and Active Engine Braking that makes driving easier and more comfortable by adding small amounts of engine braking to assist the ABS-enhanced four-wheel discs and thus reduce the frequency and effort needed to slow down. All of these features quietly go about their business unnoticed, but collectively make a big difference to daily life with the Rogue.

All of this smooth operation adds up to especially efficient fuel usage, the Rogue’s five-cycle Transport Canada rating equaling 7.0 L/100km city and 9.2 highway in FWD trim, or 7.4 city and 9.6 highway with as-tested AWD. Of note, a hybrid is available in the U.S. and may possibly come our way in the future. It’s good for a claimed EPA rating of 7.1 and 6.9 mpg combined city/highway in FWD and AWD trims.

As far as I’m concerned, the Rogue must be entertained if you’re in the market for a compact SUV from a volume brand. If you’ve got a little more coin at your disposal, this SL Platinum AWD is the way to go, although Nissan does a good job of providing value for money throughout the Rogue’s range, with a very competitive base model and well priced intermediary trims. You won’t be sorry for taking a closer look.
©(Copyright Canadian Auto Press)
Car Shopping Tools