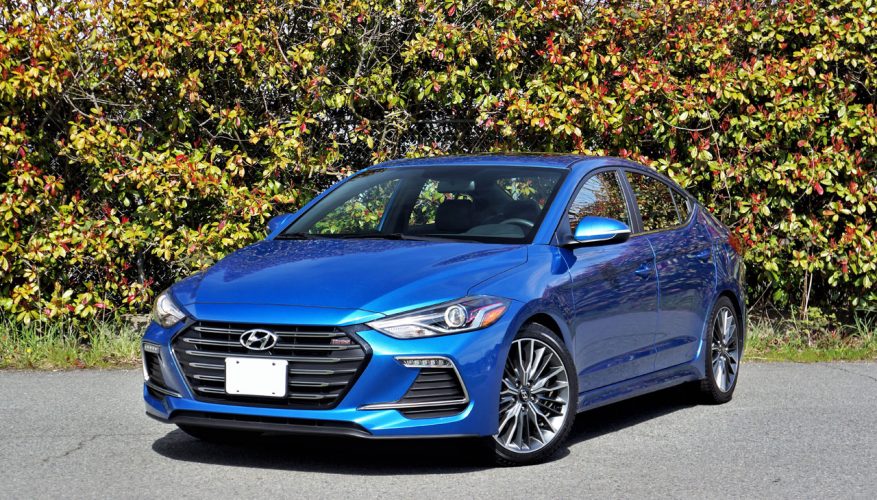 By: Trevor Hofmann
Hyundai introduced its redesigned 2017 Elantra sedan so early last year that I’m having trouble thinking of this latest test car as a 2017 model, but so it is. Truly, by the time the 2018 model rolls around later this year the Elantra Limited that went to press on March 29, 2016 will be more than a year and a half old, but we’re really only talking numbers.

Still, the 2017 Elantra Sport I tested more recently feels like an entirely different car than the Limited from before. Unlike so many performance pretenders, the “Sport” moniker on this special Elantra sedan’s rear trunk lid does more than denote stylish body cladding, larger alloys and racier interior trim with sporty red accents, but rather includes all of the above-done very tastefully I might add-while signifying a completely reworked powertrain and suspension package for a car that really lives up to its name.

First off, the new Elantra Sport is the only version of the four-door model above the base “L Manual” to incorporate a manual transmission, and there are a seven more trims on the menu. It’s a particularly good DIY shifter too. My first thought was to compare this new Hyundai to the previous generation Honda Civic Si, even writing in my notes that it felt like the “spiritual successor” to the legendary Japanese compact. To be fair to both Honda and Hyundai, however, and so as not to get hate mail from Honda Nation, I uttered those words before realizing a new 205 horsepower Civic Si was on the way (and is now on sale), thinking the new Elantra Sport would be left to fill a void when it appeared the outrageously quick Nürburgring-trouncing 2018 five-door Civic Type R would be the Japanese brand’s only offering to compete for compact sport glory.

Silly of me to think Honda would ever consider leaving a segment it helped to create. After all, VW still makes the GTI despite the Golf R, Subaru continues forward with its WRX even though it produces a more potent STI, and Ford lures in plenty of performance fans with its Focus ST while also offering the RS.

Hyundai has yet to venture into this ultra-hot sport compact territory, but the new Elantra Sport represents baby steps towards a more performance-oriented future. Even if a mega-powerful Elantra never makes the grade, many more compact car buyers step up to models in the Si, GTI, ST and WRX range than those amped up with near rally-ready engine specs.

As it is, the Elantra Sport puts 201 horsepower and 195 lb-ft of torque down to the front wheels via a 1.6-litre turbocharged and direct-injected four-cylinder, which incidentally is the same engine powering the new top-line 2018 Elantra GT. I’m guessing the upgraded hatchback will enjoy many of this performance-tuned sedan’s additional benefits as well, such as its nicely sorted short-throw six-speed manual gearbox, superb clutch take-up and wonderfully balanced chassis dynamics.

Much of the Elantra Sport’s newfound goodness is the result of the redesigned body shell surrounding all Elantra models, appropriately named “Superstructure” by its creators. It utilizes more than 50-percent ultra-high tensile steels bonded together by aerospace-sourced adhesives (yes, we’re talking Hyundai here, not Audi), resulting in a much stiffer, lighter weight, and safer body structure that’s also a whole lot more exciting to drive. Hyundai has revised the suspension geometry too, while also isolating the unibody with a new subframe design, and made it quieter via increased sound deadening methods and materials including thicker glass all-round, resulting in the tightest and most refined Elantra yet.

A more rigid body structure allows for better handling despite more compliance in the suspension design, which means you get a car that tracks better over smooth and bumpy roads, keeping more of its 225/40R18 tire patch on pavement where it can do its job, instead of in the air, which is often the case when pushing hard with an extremely stiff suspension setup. The Elantra Sport is therefore wonderfully quick through the more often than not disheveled patchwork rural backroads that allow for such undisturbed motoring mayhem, while its fully independent MacPherson front strut and multi-link rear suspension setup makes sure ride quality is never harsh or uncomfortable. This, together with the responsive powertrain and sport-tuned electronic driving aids makes for a whole lotta safe fun.

The Elantra Sport gets all of the interior improvements made to the rest of the 2017 Elantra line, all of which received a stylish new design with better materials including more soft-touch synthetic surfaces, while this mid-range model gets a backup camera with dynamic guidelines as part of its large standard 7.0-inch infotainment touchscreen. Sport Tech trim is optional, which means its touchscreen display would grow to 8.0 inches and added navigation with detailed mapping as well as Apple CarPlay, Android Auto, plus tablet-style tap, pinch and swipe functionality become part of the package, resulting in a premium-level experience despite its high $20k price point.

The Elantra Sport starts at $24,999 plus freight and fees, which makes it pricier than the mid-range SE and just under Limited trim, so it’s not top of the line (that position reserved for the $28,799 Limited Ultimate), but rather sits in its own performance category we hope Hyundai builds upon with yet more features and accessories. Tech trim adds $2,500 to the bill, and along with upgraded infotainment gives you an always appreciated auto-dimming rearview mirror with an integrated HomeLink universal garage door opener, comfort and convenience enhancing dual-zone auto climate control with an auto defogger, and 318-watt eight-speaker Infinity audio.

A seven-speed dual-clutch automated transmission with Shiftronic manual-mode and paddles can be had for $1,500, improving fuel economy from a Transport Canada-rated 10.7 L/100km city, 9.4 highway and 7.8 combined to 8.9, 8.1 and 7.0, while as noted you can now get most if not all of the above in the new 2018 Elantra GT, so if a hatchback is more to your liking it’s worth a closer look. Hyundai still has the Veloster in its lineup yet no longer offers an Elantra Coupe, leaving the aforementioned Civic to maintain this now rarified body style along with the previous generation Kia Forte Koup to soldier on in two-door hardtop guise (and the VW Beetle if you care to throw it into this mix). This lineup shortcoming probably hasn’t hampered overall Elantra sales, although after five months of 2017 the new Elantra hasn’t faired as well as some others in its category.

Possibly the Tucson compact SUV’s continued popularity is eating away at Elantra sales, a problem for the common car these days. This issue has even impacted the mighty Civic, now in its third year of declining sales, albeit still far ahead of anything else in the class, whereas adding the orphaned Scion iM to the new “Corolla Family” line has boosted the new multi-model Toyota compact line, but not to the sales levels of the single sedan back in 2015. Elantra sales pushed past the Corolla for 2016, but as of April 30, 2017 it fell back to third. Still, top three in a field of 13 direct competitors isn’t too shabby, the Elantra a perennial favourite amongst Canadian compact buyers and the new Elantra Sport a worthy contender for affordable sport compact of the year, if there is such an award.

As you can probably tell I’ve become quite the fan, whereas I was only deeply respectful of the 2017 Elantra Limited tested previously. The new Elantra Sport is a car worthy of your undivided attention, even if your sport compact loyalties currently reside elsewhere. It combines a wonderfully tractable powertrain with a brilliantly agile undercarriage, and wraps it all up in mature, sophisticated styling and a really upscale cabin. Get ready to be impressed.
©(Copyright Canadian Auto Press)
Car Shopping Tools