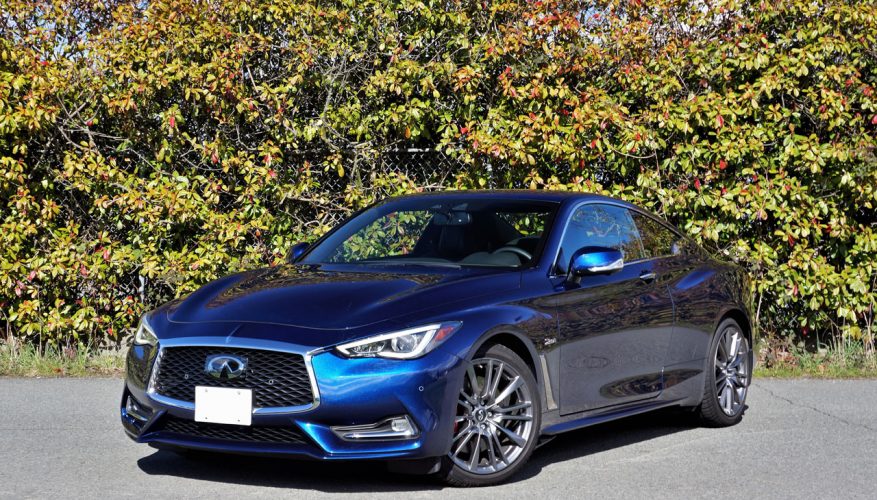 By: Trevor Hofmann
The original G35 Coupe goes down as one of my all-time favourite two-door hardtops, not only because it was and still is a particularly beautiful car, especially from its rear three-quarter angle, but it was wonderfully quick and fabulous fun through the corners too. This said, next to the entirely new Q60 Red Sport 400 the now classic G35 looks respectfully sedate, and its performance, while always a thoroughly engaging handler, is some 120 horsepower shy.

I know it’s unfair to put a 14-year old classic up against a completely new car, but there’s a reason I choose to. The light and lively nature of the original was somewhat dampened by the considerably more potent and dynamically superior second-generation G37 Coupe, which morphed into the Q60 as part of Infiniti’s brand-wide renaming scheme in the summer of 2013. Yet despite its performance gains and much-improved interior design, fit, finish, materials quality and features set, it never captured my heart as persuasively as its predecessor. The new Q60 does, however, and in Red Sport 400 trim is one of the most impressive personal luxury coupes available today.

In fact, I like the entire 2017 Q60 lineup, having driven and reviewed the new 3.0t AWD model last fall, but while a wonderfully quick, impressively refined and beautifully sculpted performance machine it was nowhere near the car this Q60 Red Sport 400 is.

The Red Sport 400 is a BMW M4 for those who prefer subtler styling and less aggressive dynamics. It’s blazingly quick with 400 horsepower and 350 lb-ft of torque driving both axles, its paddle-shift actuated seven-speed automatic rows through the gears fast enough for all but adrenaline-addicted track stars, and it’ll carve up a two-lane canyon road as adeptly as the majority of ultra-pricey super coupes, but it does so without punishing occupants from ride harshness thanks in part to sport-tuned electronically adjustable dampers.

The Red Sport 400 comes standard with a quicker steering ratio too, while my tester was also improved via Infiniti’s very reactive and remarkably natural feeling steer-by-wire Direct Adaptive Steering as part of its Technology package, which does away with the steering column (although there’s a failsafe mechanical connection just in case). Lastly, Infiniti includes more powerful sport brakes with red-painted calipers for shorter, more controlled stopping performance no matter the level of workout endured prior to calling them into action, although given enough track time it’s always possible to cause any car’s brakes to fade.

Considering its performance, the Red Sport 400 is also priced very well. Value is nothing new at Infiniti, the brand always offering a lot more for the money than its closest Japanese competitor and all three German brands, but $60,990 for this stunningly gorgeous, superbly capable sports coupe seems too good to be true. The Red Sport 400 (I know, it sounds like a NASCAR oval race) incorporates one of three Q60 Coupe powertrains, the base car sporting a Mercedes-sourced 2.0-litre turbocharged four-cylinder with 208 horsepower and 258 lb-ft of torque (I’ve only driven this one in sedan form), and the previously tested 3.0t equipped with the same 3.0-litre, 24-valve, DOHC, twin-turbo V6 as this Red Sport 400, albeit in a lesser state of tune that’s good for 300 horsepower and 295 lb-ft of torque.

No matter the powertrain, every new Q60 drives all four wheels through a quick shifting albeit ultra-smooth seven-speed automatic with rev-matched downshifts; the Red Sport 400 also receiving aforementioned paddle shifters for greater control when pushing hard. The AWD system defaults to rear-drive when no wheel slippage occurs-Infiniti (and Nissan) has been perfecting its rear-wheel biased AWD system since first offering it in the G35x sedan-or can send up to 50 percent of its torque frontward when needed. Weather conditions hardly affect traction, the Red Sport 400 adhering to pavement fully and completely, even when pushed much harder than I’d recommend to all but professional drivers. The car’s AWD system’s torque-vectoring characteristics even benefit handling in the dry, by reducing both understeer and oversteer for a well-balanced, controlled feel.

If you’ve driven a Q50 Red Sport 400 (the four-door model I reviewed last year) you’ll not only be familiar with this two-door version’s powertrain, but also its interior. Both receive beautiful blue-hued glossy carbon inlays throughout, plus high-grade contrast-stitched leather on the instrument panel, lower console, door skins, and of course the seat upholstery that’s made from wonderfully supple semi-aniline hides with perforated inserts. They’re aggressively bolstered, nicely contoured, yet still easy to get in and out of and wonderfully comfortable thanks to plenty of powered adjustment, while the foot pedals are appropriately formed from metal.

The brand’s trademark purple-tinted Fine Vision electroluminescent primary gauges are as bright and legible as always, while the large and highly functional colour TFT display at centre is a world of quick-access information. As usual Infiniti’s dual-display infotainment system resides on the centre stack, the eight-inch top monitor filled with a 360-degree parking camera, the navigation system’s mapping plus plenty of other functions and controlled by a rich looking and solid feeling knurled metal rotating knob on the lower console between the seats, and the seven-inch bottom display a touchscreen for accessing more navigation info, adjusting the radio and HVAC settings, setting up your phone, etcetera. Both displays offer very high resolution with attractive graphics, rich colours and deep contrast, while functions are easy to figure out and respond quickly.

Now that we’re talking the practical day-to-day issues of life with a Q60 Red Sport 400, take note those superb front seats offer a lot of room for larger folks and the ability to get close to the pedals for those on the smaller side, while most should find the powered steering column provides enough rake and reach for ideal ergonomics. My long-legged and short-torso body often has trouble fitting into cars with less than optimal telescopic reach (the competitive Lexus RC being one), but no such issues with any Q60. As for rear seat roominess, it’s a 2+2 sport coupe so don’t get your hopes up about stuffing in your six-foot teenager. Nevertheless, I had about three inches ahead of my knees when the driver’s seat was set to my five-foot-eight medium-build frame, with reasonable space for my feet albeit not much left over above my head-my hair was touching the glass.

Normally this is where I criticize a given sport coupe’s trunk size, but not so with the new Q60 thanks to 375 litres (13.2 cubic feet) of cargo capacity. That’s 75 litres (2.6 cubic feet) more than the outgoing Q60, while access comes via the key fob or an intelligently placed, mostly hidden button on the left taillight lens. Oddly the folding rear seatback isn’t split 60/40 or 40/20/40 like the Europeans normally do, nor is there a centre pass-through on offer, but as long as you live by the “three’s a crowd” rule you’ll have no problem stuffing skis, snowboards and more through the wide opening.

Of course, all the usual active and passive safety features are part of the top-line model’s inventory too, plus predictive forward collision warning with forward emergency braking and pedestrian detection, blindspot warning with rear cross-traffic alert and intervention, and more.

As you can probably imagine, sales of the new Q60 are much stronger than the old model, with May 2017 numbers a whole 100-percent better than the same month last year. What’s more, after a full five months of 2017 the Q60’s 540 year-to-date deliveries are up a staggering 2354.5-percent compared to just 22 over the same period last year; that number also well beyond the 422 total units sold during all of 2016.

At least as importantly, the Q60’s 540 YTD sales surpass the entire 526 tally of Lexus RCs sold last year, while the Infiniti’s natural enemy has only managed to sell 190 RCs so far this year. I’m not going to suggest that Q60 sales will outpace BMW’s 4 Series that’s already tallied up 1,393 deliveries (although it needed a two-door coupe, two-door convertible and four-door coupe to do so) or Mercedes’ C-Class Coupe numbers (unfortunately they hide them within C-Class sedan results), but it’s already passed by the Audi’s 531 A5 sales, although to be fair the four-ringed brand has been winding down the old model to make way for an all-new one that’s only recently become available. A nearly identical scenario is playing out south of the 49th, incidentally, although Lexus’s RC is getting trounced even more, so it’s safe to say Infiniti has a relative hit on its hands, which is good for morale as well as the bottom line.

I certainly understand what all the fuss is about. No matter which powertrain or trim you buy, the Q60 delivers beauty, refinement, quality, value, and speed, the latter especially true of this Red Sport 400. You owe it to yourself to take this car for a spin.
©(Copyright Canadian Auto Press)
Car Shopping Tools