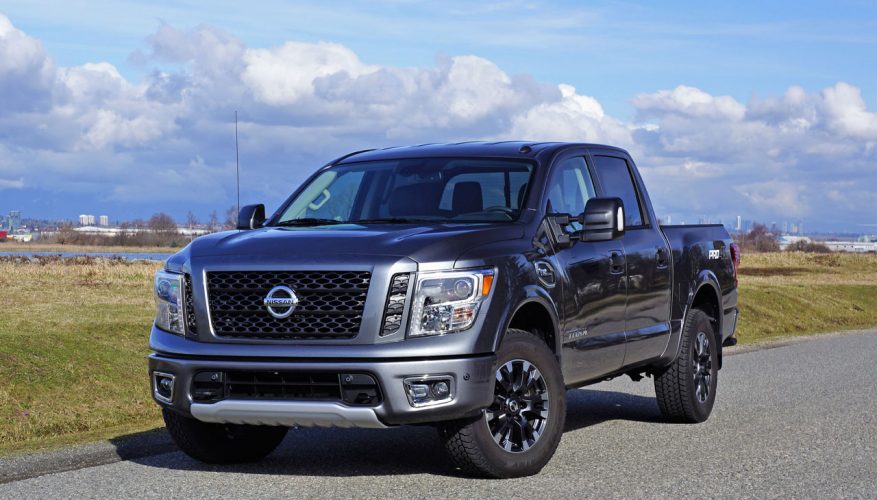 By: Trevor Hofmann
These days there’s a lot of talk about big SUVs and trucks selling much better thanks to cheaper gasoline. To be fair there were some pretty deep discounts at the pump right after the big oil crash two years ago that initially helped spur on large vehicle sales, but from where I’m standing the price of petrol is no better now than it was before the downward plunge that’s devalued our dollar along the way. As a result all the watercooler gossip is no longer rooted in reality, at least as shown by 2016 Canadian auto sales stats.

This dramatic downward drop wasn’t necessarily due to any reduction in interest, but more so a changeover to the new model (which required phasing out the old one) and the lack of a gasoline-powered version (only the new heavy-half “Extra Duty” Cummins diesel was available for 2016).

Incidentally, the full-size pickup truck sales scenario played out similarly in the U.S. last year, with all models south of the 49th moving up and down the sales chart just like here in Canada, except for the Ram pickup and Titan that gained in numbers and the Tundra that lost out.

The Titan’s lack of gasoline power has been remedied for model year 2017, and the first five months of the New Year has improved for Japan’s alternative full-size truck brand here in Canada with 1,952 deliveries so far. If extrapolated throughout the year this number would grow to almost 4,700, resulting in the Titan’s best year ever (it’s previous high was 3,499 units in 2012), but we’d better not count these chickens before they’re hatched, as we know how that can turn out in the auto industry.

Still, there are a lot of reasons to be bullish about the new 2017 Titan, especially in standard trim. Those who like the look of the rugged new Titan XD will be happy Nissan kept its façade mostly unchanged with the standard truck, including its bold three-part rectangular grille, massive headlamp clusters, muscularly flared fenders, sporty side engine vents, and acres of chrome (depending on trim).

Actually, the $57,600 Crew Cab PRO-4X reviewed here is the sportiest Titan variant, meaning much of its chrome has been swapped out for body-colour, matte black and satin aluminum, resulting in a look that’s much more sophisticated and (to these eyes) much more appealing. Along with the subdued glitter it gets a fabulous looking set of 18-inch machine-finished alloys with black painted pockets and partially painted spokes, these wrapped in 275/65 Toyo Open Country winters on my tester (although the standard 275/70 all-terrains would no doubt prove more capable off the beaten path).

On top of the unique PRO-4X details, my tester came with the $6,400 Luxury package that made for an impressive off-roader thanks to perforated leather upholstery with white contrast stitching, this even covering the dash top for a premium-level experience, three-way front seat ventilation, a heatable steering wheel, heatable rear seats, a 360-degree Around View monitor, and remote start.

The interior is a mix of very high-grade materials as noted, and the pickup truck segment’s usual rudimentary hard plastics. A nice strip of textured looking metallic trim splits the instrument panel’s higher quality surfaces with the more basic hard composite, this meeting up with an especially attractive silver metallic exoskeleton design for the lower console, mirrored on each door panel as well. Yet more satin silver and chrome accents can be found throughout the cabin, while those door panels just noted receive particularly nice swatches of contrast-stitched leather for the armrests and soft, padded inserts for cushioning elbows. The door uppers aren’t soft to the touch mind you, an oversight that should be addressed in this near luxury truck.

Our Crew Cab tester was also outfitted with Nissan’s Utili-track Channel System with four load-securing tie-down cleats, standard with the PRO-4X, while integrated in-bed lockable boxes are also available. Even more important (depending on your height) is a new retractable Rear Bumper Step Assist system that aids access to the bed for only $399 (although standard with the PRO-4X), while available $1,029 step rails or $1,159 running boards would’ve been helpful too.

Of note, the standard Titan loses no size to the XD, with both near identical in length, width and height, depending on trim. The Regular Cab body style gets an eight-foot bed, whereas Crew Cab models utilize a five-and-a-half-foot bed. Nissan promises an extended cab model at a later date, but for now only the two cab and bed configurations are available.

There’s only one engine on offer in the regular Titan, but it’s one worth bragging about. Nissan’s Endurance 5.6-litre V8 is capable of a very generous 390 horsepower and 401 lb-ft of torque, which is 73 additional horsepower and 16 lb-ft of extra torque over the outgoing V8. This new engine is also found in Nissan’s 2017 Armada SUV (and its Infiniti QX80 counterpart), while all variations on the theme are partnered to the same seven-speed automatic transmission.

Also important, four-wheel drive is standard on all but the base Titan Regular Cab S model, which incidentally starts at just $35,498. That price will likely go down when a V6 model is introduced, but so far we only have a promise from Nissan, with no release date.

On the road the gasoline engine makes for a quieter more refined experience than the big Cummins turbo-diesel, although I’ve never been one to complain about the sound of truck engines unless they don’t give off a notable note at all. Fortunately there’s nothing anemic about the Endurance V8, the exhaust emitting a subdued loping grumble at idle and a wonderful bellow at full stride, albeit never overwhelming the cab.

In fact, the Titan’s passenger compartment is quite quiet overall, Nissan effectively exorcising the majority of wind and road noises so that easy conversations can be held from the front to back row and vise versa, and the aforementioned stereo can even be enjoyed when its volume is turned down. Likewise the Titan’s ride is very compliant, the big truck’s mass helping to iron out most road imperfections nicely and its substantive wheel travel allowing the truly nasty bumps and potholes to be absorbed effectively.

I admit to driving it gingerly most of the time to save fuel, but I wouldn’t have been doing my job if I hadn’t opened it up once in a while. Its muscular V8 pulls mightily from standstill and never relents all the way up to and beyond legal highway speeds, while the seven-speed auto is wonderfully smooth albeit with quick, positive shifts. A toggle with plus-minus markings is located on the handle of the column shifter, which provides manual-mode control if you really want or need it, while a button on the end of the shift lever engages Tow/Haul mode. Other than for testing purposes I just left it in Drive and let it do its thing, the Titan drivetrain a really nicely sorted bit of mechanical engineering.

Look on the centre stack below the ignition button to engage four-wheel drive, Nissan providing a convenient rotating knob for leaving its most economical 2WD mode and selecting “4H” or “4LO”, the former for snow or lighter duty dirt roads, and the latter for tackling the really tough stuff. Let’s remember that Nissan’s four-wheel drive prowess is the stuff of legend, not only here in North America where Datsun pickups got the ball rolling (my dad had one of these and it was bulletproof), followed by the Frontier and original off-road-capable Pathfinder SUV, and globally where trucks like the Navara/Pick Up and SUVs like the Patrol have long been used for personal, commercial and military purposes. Nothing they have, short of the latest Patrol (same as our Armada), enters the woods as comfortably as this Titan PRO-4X.

The front seats are especially large and accommodating, while the rear seating area is limousine-like, in keeping with most full-size four-door pickup trucks. They’re plenty comfortable too, with decent back support and a nice, wide flip-down centre armrest with integrated cupholders. The lower cushions flip upwards for placing cargo on the floor, providing a sheltered and secure storage area for valuables.

After yet another week in a new Titan and my first with the uprated gasoline-powered 5.6-litre V8, I can easily understand why sales growth has been so strong. Sure it has a way to go before it catches up to Tundra numbers, and will probably never match any of the domestics, but the Titan is once again a worthy member of the full-size pickup category and totally worth investigation. Seriously, Nissan offers a lot of truck for the money, and if Tundra is any example of how the Titan might fare when it comes time to resell (imports often hold their value better), it might be an even smarter long-term bet than one of the domestics. I say you’d better check it out.
©(Copyright Canadian Auto Press)
Car Shopping Tools