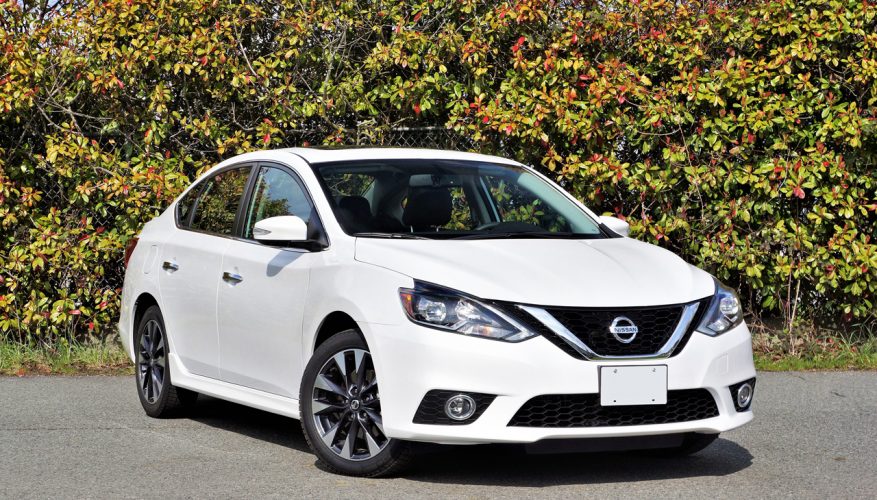 If you’d asked me last year to name the Canadian small car market’s most and least entertaining cars, I’d have put Nissan’s subcompact Micra city car and compact Sentra sedan on the respective lists. For 2017 the Micra remains a personal favourite cheap performer in the entry-level categories, and much to my delight Nissan has elevated the Sentra’s fun factor times ten.

It wasn’t too long ago that the Sentra SE-R was a highly respected sport compact, and while this once revered model is no more, the Sentra four-door can now be had in as-tested SR Turbo guise as well as top-line Nismo trim. I’ll leave the Nismo for a future garage entry and road test review, because the SR Turbo is what currently occupies my driveway.

Before delving into this all-new 2017 trim, Nissan gave its Sentra a thorough mid-cycle refresh for the 2016 model year that pulls its much more agreeable styling cues from other models within the Japanese brand’s lineup, particularly the Altima mid-size sedan. The most prominent change was the addition of Nissan’s now trademark V-motion grille in chrome and black mesh, extending upward into a new hood and downward into a revised lower fascia, while new complex headlamps included LED low beam projectors in SL and SR trims. Around the sides new 17-inch machine-finished alloys with black painted pockets were added to the latter two trims as well, while all Sentras received new taillight lenses and a reworked rear bumper in typical mid-cycle makeover fashion.

All of this remains the same except for the elimination of SR trim and adoption of this SR Turbo nameplate for 2017, plus the engine and other performance tweaks that make it so fun to drive. The new 1.6-litre direct-injected four-cylinder gets borrowed from the already impressive Juke crossover, complete with 188 horsepower and 177 lb-ft of torque (up a sizeable 58 horsepower and 49 lb-ft of torque over the base 1.8-litre four). Even better, it can be paired with the as-tested six-speed manual gearbox or an available continuously variable automatic (CVT), both boasting unique tuning specific to SR Turbo trim.

Additionally, the SR Turbo gets reworked electric power steering for more direct response and feel, aided by stiffer springs and dampers plus extra bracing for greater rigidity overall. I’ll fill in all the driving dynamic blanks in my upcoming review, but suffice to say it’s worthy of contention with Honda’s new turbocharged Civic powerplant, and can mix it up with the new Elantra Sport as well.

Back to the changes that came with last year’s car, the 2017 Sentra carries forward all interior updates such as its more refined surface treatments that now make generous use of soft-touch synthetics and metallic accents, while the SR Turbo gets a sporty new 370Z-inspired three-spoke leather-wrapped steering wheel that’s a lot better looking due to a reshaped centre hub and side spokes (it’s no longer a big ugly blob) and less crowded multifunction controls. Additionally, new trims were added to the centre stack and doors, the one in my SR Turbo particularly nice.

On the digital front, all 2016 Sentras received a 5.0-inch colour TFT multi-information display within the primary gauge package, with higher end trims getting better screen resolution, while Siri Eyes Free was also added to the mix.

I’m not going to go into every trim level being that this overview is for the SR Turbo, a very different type of car targeting a more performance-oriented buyer, but take note that S and SV trims offer a little more enjoyment from the base engine thanks to their standard six-speed manual gearbox, whereas the more efficient CVT is available with these trims as well, and comes standard on the luxury-focused SL.

Diving right into the SR Turbo, which starts $5,800 higher than the base $15,898 S at $21,598 plus freight and fees, the equipment list includes all items mentioned thus far as well as fog lamps, 205/50VR17 all-season tires, larger 11.7-inch front ventilated sport brakes with upgraded pads (the base car gets 11s), 11.5-inch solid rear discs (base gets drums), active understeer control (when you “upgrade” to the CVT), LED turn signals integrated within the side mirror housings, side rocker extensions, a rear deck lid spoiler with an LED centre mounted brake light (CHMSL), a sport rear fascia with a matte black diffuser-style centre insert, a chromed exhaust tip, and more on the outside.

Of course this all gets added to myriad features available in lesser trims, of which I’ll go into in more detail as part of my upcoming road test review, although take note if you’d like your Sentra with enough active safety gear to qualify for IIHS Top Safety Pick Plus status, which it does, such as emergency autonomous braking and adaptive cruise control, you’ll need to step into a less powerful CVT-only model.

To its credit that seemingly anemic base Sentra powerplant gets the segment’s best fuel economy at 8.1 L/100km in the city and 6.3 on the highway with its optional CVT, or 9.0 city and 6.8 highway with the standard six-speed manual, while the turbo increases consumption to a claimed 9.1 city and 8.9 highway.

Before signing off I’ll mention one of the Sentra’s greatest attributes, its accommodating passenger compartment and massive 428-litre trunk. I’ll run over more dimensional details and comment on the car’s overall comfort in my review, but its standard 60/40 split-folding rear seatbacks are a bonus no matter how it measures up.

Until next time, sport compact fans might want to consider testing out this new Sentra SR Turbo or its even quicker Nismo sibling. I’ll be back with my road test results and more soon…