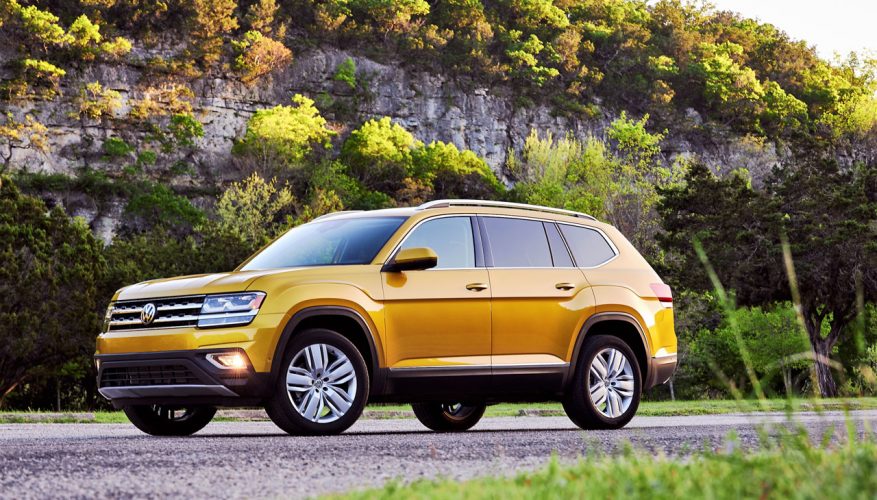 By: Brian Armstead
In Greek mythology, Atlas was the figure that was tasked to carry the sky on his shoulders for eternity.

The 2018 Volkswagen Atlas has a role very close to the mythical Atlas, as VW is counting on Atlas to be a sales star as the company rebounds from its diesel emissions scandal.

The Atlas is large and in charge. It’s the only VW that seats seven, now that the Routan minivan is kaput. And the Atlas’ third row is unique, as you can leave three child safety seats firmly connected in the second row and still have generous access to the adult-sized third row. Yes, you can be more than five feet tall and sit comfortably in the Atlas’ third row.

And while the Atlas is large, it drives like its smaller brothers Touareg and Tiguan. Touareg is considerably more expensive than Atlas ($35,690 base versus $51,960 for Touareg) and priced competitively with the much smaller Tiguan (base MSRP $25,990), which in 2018 guise is larger than the previous generation’s offering. This begs the question, why would anyone buy the smaller, more expensive Touareg instead of the Atlas? I put this question to VW’s media team, and the answer was, “Touareg is a more premium offering.” Well, on paper it may be, but in reality the all-new Atlas is so well contented it’s bound to cannibalize sales from the Touareg. Let’s see what happens.

Speaking of Atlas content, you’ll be impressed at base Trendline, Comfortline or Highline trim levels. Let’s start with safety, where VW is world class in terms of content. If there is a system on the market today that helps to keep you safe, it’s standard or optional on Atlas. From electronic stability control to full autonomous braking, it’s offered.

Atlas is the only vehicle in its class to offer the Automatic Post-Collision Braking System, which is standard on all models. This system builds on the premise that a collision is rarely a single, instantaneous action, but rather a series of events that follow the initial impact-the most significant of which can cause additional collisions. The Automatic Post-Collision Braking System addresses this by applying the brakes when the airbag sensors detect a primary collision, helping reduce the chance of additional damage.

On the road, the Atlas really excels. As stated earlier, it drives much smaller than its size.  I expected it to offer ponderous handling like some other large SUVs in its class. Atlas underpinnings include front coils springs with tube shock absorbers, and a multilink setup in the rear. Meaty 245-section rubber mounted to standard 18-inch wheels offer an aggressive side profile. Atlas gives the impression that it’s just as comfortable on the road as it is off.

And Atlas is indeed off-road capable. Use the console mounted rotary controller to select from four 4Motion all-wheel drive modes: Dry, Rainy, Snowy and Rough. When the going is smooth, the eight-speed Tiptronic transmission handles shifting duties with consummate ease. And while you can ‘rough it’ off-road, you’ll be hard pressed to rough it in the Atlas’ well-appointed interior.

It’s hard to know where to start. Choose the expansive panoramic sunroof, and you’ll get three rows of clear views to the skies. It’s a very large section of glass, but it doesn’t squeak or rattle over washboard surfaces. Impressive.

Another impressive standard feature is the 17 cupholders throughout the three rows. Yes, each passenger can have 2.42857143 drinks at their disposal. To keep all entertained, choose from myriad audio options via the 12.3-inch centre console display. It’s crisp, informative and intuitive, amongst the best I’ve experienced. Apple CarPlay and Android Auto are standard equipment, and a rockin’ 480-watt Fender premium audio system is optional.

At present, the only powertrain available is a 3.6-litre V6 outputting 276 horsepower with either front- or all-wheel drive. Later this year, a front-wheel drive-only 2.0-litre turbo four with 235 horsepower will be available at a lower MSRP. During the media launch we drove both, and either is more than capable of putting a smile on your face when highway-merging duties call for an authoritative burst of power. The V6 is available with a towing package and factory tow hitch capable of hauling 2,268 kilograms (5,000 pounds), while it also gets a five-cycle fuel economy rating of 13.7 L/100km city and 10.1 highway under lighter loads.