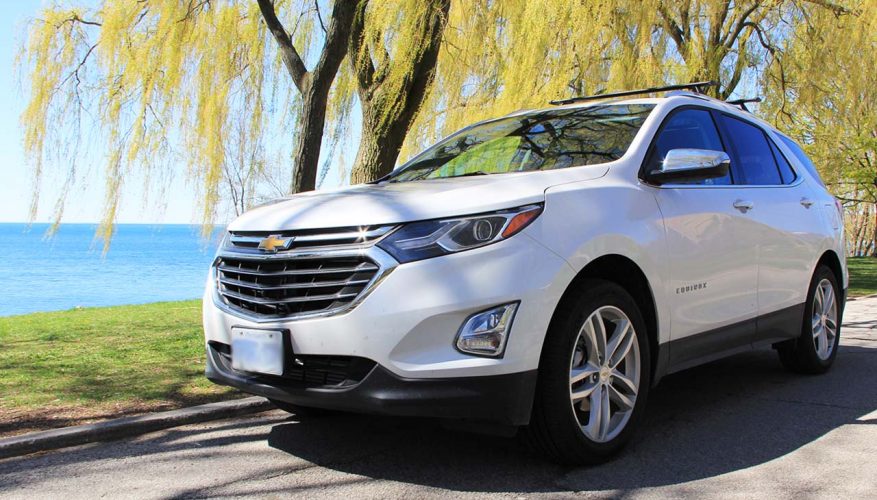 The all-new 2018 Chevrolet Equinox is here and we have it in our garage. Past models have sold relatively well in the small SUV category. Canadian consumers bought 19,197 Equinox utilities in 2016, and over the course of its 13-year tenure upwards of two million have been sold in North America.

It faces stiff competition in the compact crossover market going up against the bestselling Toyota RAV4 that sold 49,103 units last year. Other competitors in the Equinox’ class include the Ford Escape, Honda CR-V, Nissan Rogue and Jeep Cherokee.

The Equinox finally received a much-needed redesign from its tired second-generation model that’s been in production since 2009. The grille is more aggressive and trimmed in chrome while the LED headlights have gone from rounded and cute to sharp and sporty. The front fascia looks like it’s taken athletic styling cues from the other cars in Chevrolet’s lineup such as the Cruze, Malibu and Volt. The entire car has been aero-tested in a wind tunnel and it shows. Subtle sculpting in the Equinox’ side paneling make it an interesting vehicle to look at.

The changes don’t stop with aesthetics. The new Chevy weighs 204 kg (450 lbs) less than the previous model at 1,509 kg (3,327 lbs), which results in better fuel economy and acceleration, but we will get to that in the full review.

The cargo capacity is slightly down from the 2016 Equinox but it doesn’t affect the amount of room for passengers. The second row has ample space and can comfortably seat three adults abreast, although the headroom in the back row is slightly cramped at 937 mm (36.9 inches) with a sunroof. Up front the driver’s seat is fully changeable with eight-way adjustable, upwards of six feet I found no issue with the head room and was pleasantly comfortable.

This Equinox in our garage has the 1.5-litre turbocharged engine paired to a six-speed automatic transmission with manual shifting mode. The engine has auto start/stop feature to enhance fuel efficiency.

Along with the broad and varied engine lineup the 2018 Chevrolet Equinox also comes with four trim levels including the L, LS, LT and Premier with all trims available in front- or all-wheel drive.

The Equinox is extremely well equipped with advanced safety features such as forward-collision warning, lane-departure warning, lane-keeping assist and automated low-speed braking. The Chevy is also loaded with sensors and cameras that provide more safety features such as blind-spot warning, rear cross-traffic alert, rear park assist, rearview camera, and a bird’s-eye view of your perimeter. For parents there is also a “Teen Driver” system that sets speed warnings and limits the maximum volume for the audio system. Additionally, it delivers a “report card” that parents can view to see how their teen is driving.

Come back to read the full road test review, at which point we’ll fill you in on the new SUV’s overall practicality, economy, and safety features, as well as what it’s like to drive.