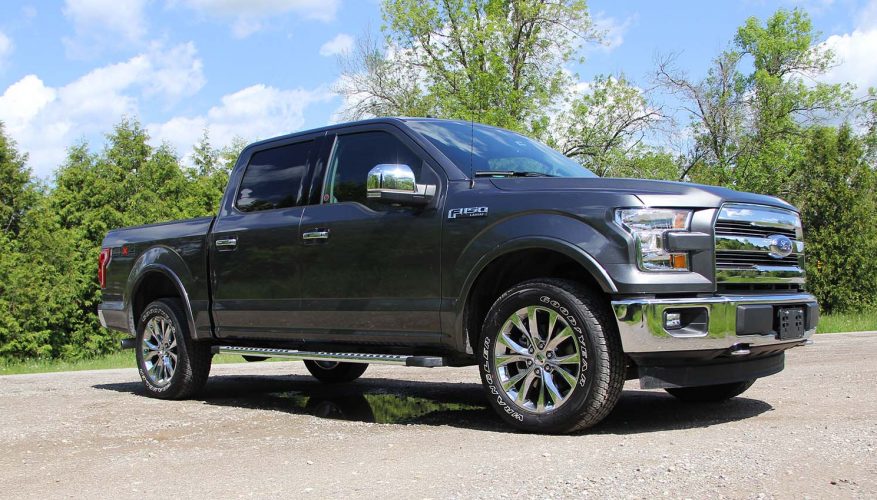 North America loves its F-series trucks. In 2016 Ford sold 820,799 F-series pickups in the United States. Canada sold nearly 150,000. Ford likes to boast that it’s been Canada’s best selling vehicle for 51 years and it’s easy to understand why. The closest competitor to the F-series line was the Ram Pickup having sold 89,048 last year, followed by the GMC Sierra with 51,091 and then the Chevrolet Silverado at 44,932.

So what makes the Ford so appealing to the Canadian consumer? Pickups are a different breed today than they were in decades past. Trucks were used for heavy lifting and towing and usually thought of as a tradesman’s tool. However, many have developed luxurious traits that are normally only seen in luxury sedans and SUVs.

The interior of our test model is spacious with tasteful aluminum accents and comfortable bucket seats that are covered in leather. The dash is well thought out and very easy to become accustomed to. There is plenty of room in the back row, which can easily seat three adults side-by-side.

It’s easy to get caught up marveling at all the technology and dazzling chrome accents, however the truck’s unseen components make it truly outstanding. The F-150 Lariat comes with a choice of three engines. First, the 2.7-litre V6 EcoBoost comes standard and develops 325 horsepower and 375 lb-ft of torque while only consuming 12.2 L/100km city, 9.3 highway and 10.9 combined.

Unfortunately, the 2.7-litre V6 EcoBoost and the 5.0-litre V8 are not yet available with the new 10-speed automatic, and come with a proven six-speed automatic transmission instead.

The F-150’s ability to provide strong performance despite its sizeable proportions isn’t just about engine performance, but more importantly can be attributed to a completely new light truck philosophy at Ford. As part of the 2015 F-150 redesign it switched from utilizing steel for its body and bed to a combination of “military-grade” aluminum and high-strength steel.

In the upcoming review we’ll give you a taste of what it’s like to sit behind the wheel along with a detailed description of the infotainment system that truly impressed us.

Stay tuned for a full review…