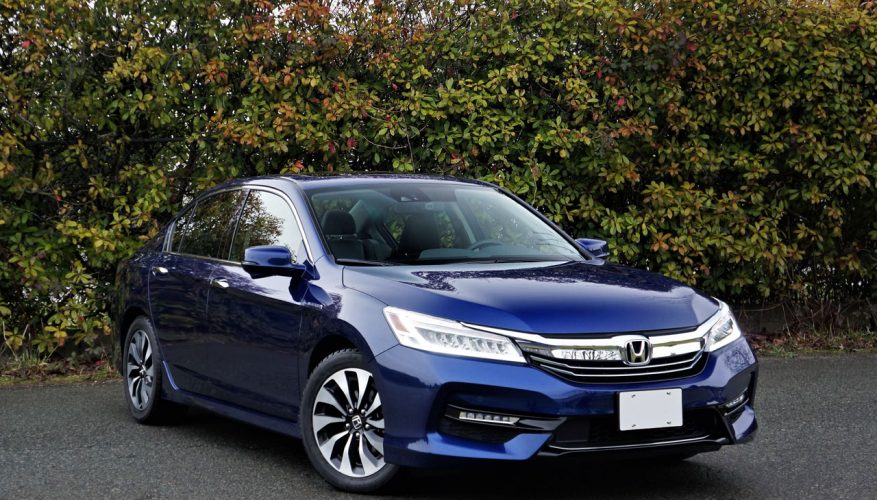 By: Trevor Hofmann
When you go to Honda’s retail website and click on “Hybrids” you’re presented with the 2017 Honda Accord Hybrid. That’s it. For the first automaker to ever produce a modern-day hybrid for consumer sale, not to mention a company that’s created two different versions of that dedicated Insight compact hatchback (1999–2006 and 2009–2014), a long-running Civic Hybrid compact sedan (2002–2015), and another dedicated CR-Z hybrid sports model (2010–2016), it’s strange to see just one electrified model in the current lineup.

Click on the “Hybrid” pull-down menu at Toyota Canada’s site and you’ll find six completely different HEVs, including three that wear Prius badges (subcompact, compact, and near full-size), two SUVs, and the Camry Hybrid that does battle with this Accord Hybrid, while Toyota’s U.S. division offers two more including the Prius Prime plug-in and the full-size Avalon Hybrid, not to mention a Camry/Accord-sized hydrogen fuel-cell vehicle dubbed Mirai.

In the U.S. the Accord Hybrid is joined by the 100-percent electric Fit EV (never offered here), and the hydrogen fuel cell-powered Clarity mid-size sedan (another sign of what a 10-times larger market allows), whereas on both sides of the 49th parallel Acura shows off its fabulous new NSX Sport Hybrid, the excellent albeit somewhat sedate looking RLX Sport Hybrid, and the brand new MDX Sport Hybrid. Yes, things are looking a lot better for electrification at Acura than Honda.

The 2017 model shown on this page is actually the second Accord Hybrid, the first introduced in 2005 and sold only through 2007, which sported (literally) a powerful 3.5-litre V6 combined with extra electrical boost that provided 255 net horsepower and 232 net lb-ft of torque for a 6.7-second sprint to 100km/h. It was a fun car to drive and plenty efficient with better fuel economy than the four-cylinder Accord, but the market wasn’t interested in paying nearly $40k to have their cake and eat it too (especially after the cheaper and more efficient Saturn Aura Hybrid and Nissan Altima Hybrid arrived at the party), so therefore it was killed after just two model years. Truly, if Honda had dropped this power unit into the Acura TL of the era it might’ve been a hit, or at least something similar might still be around to fight against Lexus’ GS 450h.

After introducing the superb 2014 Accord Hybrid (I named it “one of the best hybrids yet”) and toying with an even more enticing Accord Plug-in Hybrid (not available in Canada, but nevertheless driven and reviewed by yours truly and left duly impressed again-albeit this model was cancelled after 2015), Honda seems more tuned in to the electrified market these days, especially because this new-generation Accord Hybrid has been focused more on saving at the pump than leaving its competitors behind at the stoplight (although, as you’ll soon find out, it still does that quite handily). This 2017 model is even more efficient than the 2014–2015 one (Honda took a year off the model for 2016), its hybrid powertrain updated with more power and better economy.

It’s $1,500 and change pricier than its main Camry Hybrid competitor, mind you, starting at $31,300, which might affect the decision of some, but to my mind it’s a moot point because the Accord, on the whole, is a much more enticing prospect.

It starts out with a 500-cc smaller 2.0-litre Atkinson-cycle four-cylinder making just 143 horsepower, but the 181 horsepower electric motor connected to it increases total output to 212 net horsepower resulting in 12 additional horsepower over the Camry Hybrid (and 16 more horsepower than the old 2015 Accord Hybrid) and therefore more oomph off the line, while its claimed 4.9 L/100km city, 5.1 highway and 5.0 combined fuel economy is much better than the Camry Hybrid’s 5.6 city, 6.2 highway and 5.9 combined rating as well.

One of the reasons the Accord Hybrid beats most competitors at the pump is its ability to drive on full EV power at higher speeds for longer. The power unit is dubbed “three-mode) for its ability to run in full EV mode at city speeds of up to 100 km/h (not even remotely possible in the Camry Hybrid-more like 20 km/h), Hybrid mode most of the time, and Engine mode so you don’t drain the lithium-ion battery (the Camry still uses NiMH) when traveling at highway speeds. This allows you to theoretically drive from your house to the highway on 100-percent pure electric power, motor to work at high speed on gasoline-propulsion alone (providing you don’t commute at the same time as everyone else) and then get back into EV mode before arriving at the office.

It uses an innovative electronically variable automatic transmission to sort everything out, allowing for smooth, linear acceleration even when pressed hard, or alternatively you can push the “SPORT” button on the lower console for more immediate thrust.

As has long been the case, the Accord is a more capable mid-size four-door through the corners than the Camry too, its agility revered since arriving on the scene in the late ’70s and still amongst the best in its class. This poise under pressure continues with this hybrid electric version, which even includes a front strut tower brace to increase torsional rigidity so as to make the most of the fully independent MacPherson strut front and multi-link rear suspension, while it also delivers a nicely sorted ride with ample comfort over wayward city streets and long forgotten alleyways, while it’s effortless on the highway.

Most would probably agree the Accord Hybrid is finished to a higher degree than the Camry Hybrid too, from the outside where my $37,400 Touring tester was fitted with a gorgeous set of jeweled full LED headlamps for a near-premium look, to the interior where its glossy woodgrain trim has more density for a more genuine feel. Overall fit, finish and materials quality is fairly good with both, the Accord getting plenty of high-grade soft-touch synthetic surfaces front to back, some even detailed out in stitched and padded leatherette. Likewise the Accord’s switchgear is as good as in any premium car, while its bright and highly legible colour gauge cluster is eye-catching and highly functional thanks to various hybrid-specific meters substituting for the tachometer on the left and a useful display at centre, whereas its dual-display infotainment setup on the centre stack is very similar in design and execution to those found in top-line Acura models.

If you’re new to this setup give yourself time to get acclimatized, as the top display is controllable by a big dial and set of buttons below the lower display, the latter a touchscreen that most should find easier to use. It gives you the benefit of showing multiple functions at once without splitting screens, and now comes well stocked with the latest features such as Apple CarPlay and Android Auto for seamless smartphone integration, Bluetooth phone with audio streaming, Siri Eyes Free, Wi-Fi tethering, SMS- and text message capability, seven-speaker 360-watt audio, a multi-angle backup camera with dynamic guidelines, Honda’s (love it so much) LaneWatch blindspot display, and more in the base model no less.

All of this equipment comes in a large, accommodating, well-groomed interior that’s capable of hauling four sizeable adults in total comfort, with three across the back in a pinch. As for the trunk, it’s abbreviated from the conventionally powered Accord’s 447 litres (15.8 cubic feet) to just 382 litres (13.5 cubic feet) due to having the battery housed in the rear bulkhead. This means it loses the regular Accord’s split-folding rear seatbacks, making a roof rack necessary for trips to the ski hill (or alternatively an HR-V, CR-V or Pilot for the second car). This is one of the only reasons you might consider a Camry Hybrid over this Accord Hybrid, but then again who am I to say what you should or shouldn’t prefer.

At the end of the day it’ll come down to brand and styling preferences, money, and other details that will or won’t line up with your tastes and priorities, and that’s just fine. I drove (and reviewed) the Camry Hybrid recently and couldn’t complain (much), and the Camry’s massive lead on U.S. and Canadian sales charts makes it clear that most people disagree with my evaluation.

I should also mention the Accord Hybrid and Camry Hybrid aren’t the only HEVs available in the mid-size sedan segment, with others including the Ford Fusion Hybrid, Hyundai Sonata Hybrid, Kia Optima Hybrid, and since last year the Chevrolet Malibu Hybrid. What’s more, some of the others offer plug-in hybrid capability, both Honda and Toyota dropping the ball in this respect, although Honda is adding the Clarity Plug-in Hybrid (and hopefully the Clarity Electric) to our market soon.

All in all, I believe those who take the time to compare will agree the extra expense needed to drive home the Accord Hybrid is money well spent. You get a more advanced, more powerful and more fuel-efficient hybrid powertrain that can travel much faster and farther in EV mode, a longer overall range of up to 1,220 km (758 miles) between fills (that’s class leading by the way), more entertaining driving dynamics, more advanced and therefore safer LED headlights, an IIHS Top Safety Pick Plus rating (as does the Camry Hybrid), an arguably more refined interior, and to my eye at least, more agreeable styling.

As you can probably tell, the new Honda Accord Hybrid’s got my vote.
©(Copyright Canadian Auto Press)
Car Shopping Tools