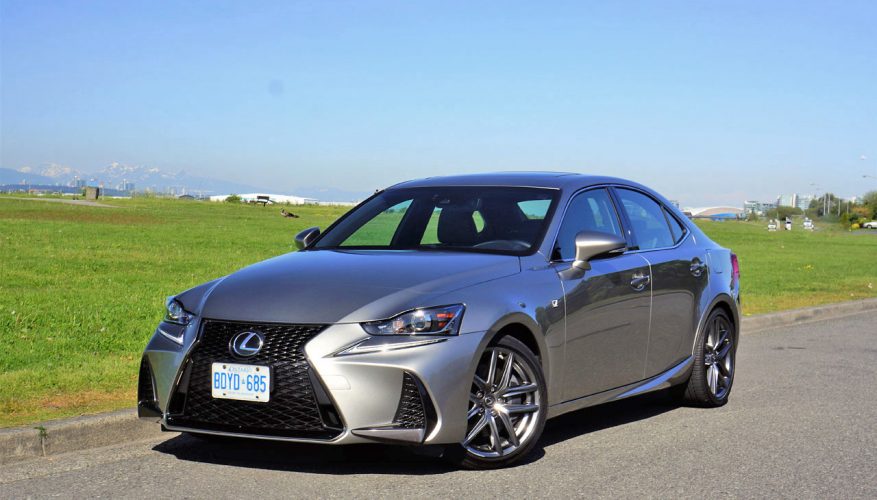 I’m always fascinated by how different the Canadian market is from our friends to the south.

We speak the same language (accents and colloquialisms aside), watch most of the same TV shows and films (albeit skewed more towards all things hockey), and listen to much of the same music on the same brands of TVs, tablets and phones, buy most of our clothes from the same popular branded stores, and eat at many of the same fast food restaurants (although you can’t get poutine or a McLobster at McDonald’s U.S. locations), yet we still have unique national traits that show up in the types of things we purchase.

Canadians tend to like hatchbacks, wagons and minivans more than Americans, and when we opt for four-door sedans we lean more towards smaller sport models than larger luxurious ones. Take Lexus, for instance. In the U.S. the mid-size front-wheel drive ES has long been one of the most popular luxury sedans in existence, more than doubling IS sales in 2012 and selling tens of thousands more every other year.

While I like the ES 350 and ES 300h, my feelings are more lukewarm than anything remotely fiery hot. It’s an excellent car from a mid-size family sedan perspective, but exactly how much better it is than any of the large mainstream volume-branded flagship models such as Toyota’s own Avalon, Nissan’s Maxima, Chrysler’s 300, Chevy’s Impala, Buick’s LaCrosse, and Kia’s Cadenza is difficult to surmise. The IS, however, has nothing from the lower class to compare it to.

Perhaps Kia’s upcoming Stinger will measure up premium status, but for the time being we can only draw comparison to D-segment sport-luxury car leaders like BMW’s 3 Series,

Mercedes’ C-Class, Audi’s A4, Acura’s TLX, Infiniti’s Q50, Cadillac’s ATS, Volvo’s S60, Jaguar’s XE, and Alfa Romeo’s new Giulia, if I ever get my hands on one. In this way it’s a true premium product, unlike the ES that only really competes with Lincoln’s MKX and Buick’s Regal or LaCrosse in the near-premium sector.

As for where the IS stacks up against those German, Japanese, American, Swedish, British and Italian competitors, Lexus can feel pretty good with its fifth place amongst 11 direct rivals (I included the Buick Regal due to its size). The only non-German car to beat it is the TLX, while the Q50 remains just behind nipping at its rear tires.

I don’t necessarily want you to read performance into that last comment, as the Q50 is now the get-up-and-go leader amongst Japanese entries when kitted out in top trim. That would be the 400 horsepower Q50 Red Sport 400, that crushes the top-line 290 horsepower TLX as well as this top-tier 306 horsepower IS 350 (the mighty V8-powered IS F no longer part of Lexus’ “F” performance branded lineup).

Amongst the Germans, you’ll need to move up to the 354 horsepower S4 to get near the Q50’s highest level of boost, as the top-line A4’s 252 horsepower four won’t light a fire under any serious stoplight warrior, whereas BMW’s 340i now makes a heady 320 (but if feels like so much more), while Mercedes’ C 43 AMG sizzles with 362 horsepower.

To keep you from bothering me with emails, the quickest non-Quadrifoglio Giulia makes 276 horsepower, the fastest non-Polestar S60 puts out 302 horses, the speediest non-V ATS puts out 335, and the hottest XE maxes out at 340; I’m not even going to go into the M3 and V8-powered AMG. So, to make a short story long, the IS 350 doesn’t pull in its buyers on performance alone.

In fact, while 306 horsepower and 277 lb-ft of torque is nothing to be shy about, nor its bettering the already enjoyable IS 300 by a significant 51 hp and 41 lb-ft, its six-speed automatic is no more advanced than the ES 350’s identically cogged autobox. Where it deviates is in its aforementioned smaller size and rear-wheel biased standard all-wheel drive layout. I’ll delve into its overall driving dynamics in an upcoming review, so for now we’ll leave its drivetrain specifics at that.

Hard to believe but I drove the original IS 300 soon after its 1998 launch, and was on the press launch for the second-generation 2006 model in Toronto, where we put it through its paces on a makeshift autocross course at the old Downsview Airport, owned by Bombardier incidentally. That was a breakthrough car for Lexus, but other than the sensational 416 horsepower IS F I mentioned earlier and tested in the spring of 2008, that second-gen car doesn’t come close to measuring up to this third-generation model.

This latest IS was introduced in 2013 as a 2014 model, and thanks to dramatic styling and dynamic performance has garnered more fans than ever before. This year marks the current third-gen’s mid-cycle update, which includes subtly reworked styling from front to rear. Following a pattern already set out by its siblings, the front grille grows in size, especially in F Sport trim, as do new larger air intakes integrated into a totally reworked lower fascia. These details are even more pronounced in F Sport trim thanks to a glossy black grille surround and side vent strakes, these matching the grille and vent inserts ideally.

The checkmark LED driving lights remain unchanged, but the headlamps above truly catch the eye as they get a totally new shape and inner assembly, whereas the LED taillights are identically shaped yet receive new lenses and innards. A new lower fascia incorporates a new matte black diffuser style cap and new angular tailpipes, this latter upgrade winning my wholehearted approval.

I’ll give you my honest opinion about changes up front in my upcoming review, but suffice to say bigger and bolder doesn’t necessarily translate into better. That said some changes inside are nice, including new “hairline” instrument panel trim and a gorgeous analog clock.

Of note, standard with on all IS trims for 2017 are LED headlamps with automatic high beams, rain-sensing wipers, dynamic radar cruise control, and other Lexus Safety Sense+ features such as a pre-collision system and lane departure alert with autonomous steering assist, which would all come together to earn a best-possible IIHS Top Safety Pick Plus rating if it weren’t for a merely “Acceptable” rating for its small overlap front crash test and another “A” for its headlights. It scores best-possible “Good” marks in every other category, and a “Superior” rating in the area of Crash Avoidance and Mitigation under front crash prevention. Being that most other Lexus models earn top IIHS marks, they’ll want to modify whatever needs fixing in order to make this car qualify.

Not safety related, unless trying to find your way, finding the optimal driving position, or getting the sun off the necks of rear passengers, my Atomic Silver painted tester included the reasonably priced $1,300 upgrade to the F Sport 3 package that added a 15-speaker Mark Levinson audio upgrade and a powered rear window sunshade.

I’ll go over all-important driving dynamics in my upcoming road test review, plus talk about styling, interior materials quality and refinement, roominess, how all the features work, and more. Stay tuned…