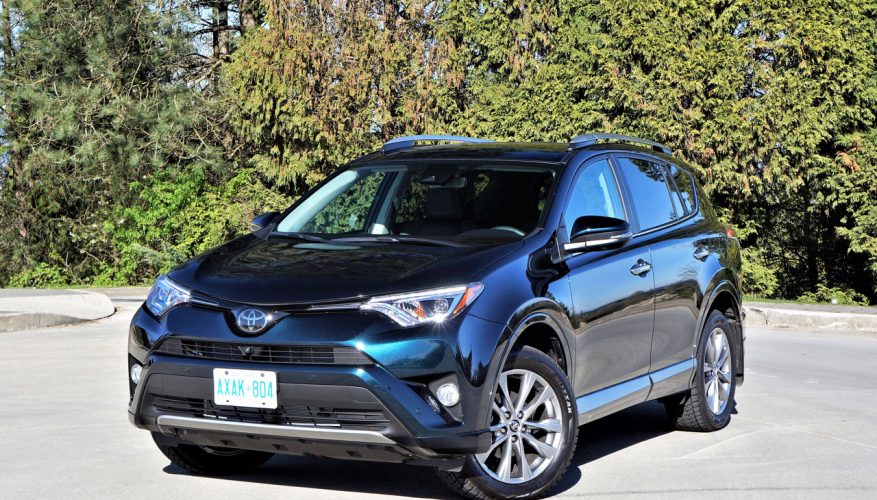 The RAV4 is number one! At the close of 2016, Toyota’s fourth-generation RAV4 became the bestselling compact SUV in Canada, and by a significant margin. What’s more, its 49,103 total sales surpassed the mighty Corolla (by 908 units) for the first time ever, yet another sign of shifting consumer tastes from cars to crossover sport utilities. This also means the RAV4 is now the most popular Toyota in Canada.

Helping boost sales was a significant mid-cycle update for the 2016 model year, which dramatically changed frontal styling and added a new hybrid version. This said the 2017 model is mostly unchanged, albeit for some new standard features and a totally new top-line trim level.

As part of the Japanese brand’s plan to outfit every new model with the latest active safety features, all new 2017 RAV4s come with the Toyota Safety Sense (TSS) P package. The “P” references “person”, which means its autonomous braking tech will stop for pedestrians as well as other vehicles, while TSS-C (“C” being for “cars”) is the simpler of the two systems.

TSS-C, which comes standard with the Yaris Hatchback, Prius C, and the Corolla iM five-door hatchback (previously Scion iM), includes auto high beams for dimming your headlights when surrounding vehicles come into your line of sight, a Pre-Collision System that immediately slows/stops your car if it detects an imminent crash, and Lane Departure Alert that notifies you if a car is just behind you in the adjacent lane.

TSS-P, which gets fitted to the Corolla sedan, the Prius, this RAV4, the RAV4 Hybrid, Highlander, Highlander Hybrid, and Avalon, incorporates all of the above while adding Pedestrian detection for the Pre-Collision System, active steering assist that will turn your front wheels back towards your current lane if it detects a car in the adjacent lane when you attempt to change lanes, and dynamic cruise control that maintains a safe distance behind a given vehicle even if that vehicle slows.

The inclusion of TSS-P results in a best possible IIHS Top Safety Pick Plus rating, the RAV4 being the only SUV in its compact class to achieve such a high standard safety rating.

While these features improve safety, it’s also important to note that making them standard across its entire lineup as old models get replaced with new ones will make Toyota one of the best-prepared brands for full autonomous driving capability, something many industry players are betting is in the cards for the not-too-distant future.

The other big news item for the 2017 RAV4 is on the other side of the pricing spectrum, a new top-tier Platinum package added on top of Limited trim. Features include fully painted bumpers, wheel arches and rocker panels, plus proximity keyless access for all four doors as well as the liftgate, with hands-free access to the latter, ambient footwell lighting, more upscale interior detailing, Platinum-embossed metal scuff plates, and special Platinum-branded floor mats.

To be clear, the Platinum model isn’t a separate trim, but rather a $1,460 package that can be added to $38,205 Limited trim, the latter already filled with a bevy of high-grade features such as unique 18-inch alloy wheels, a less comprehensive smart key system, pushbutton ignition, driver’s seat and mirror memory, a 360-degree surround parking camera, an 11-speaker JBL Synthesis Audio System, a powered glass sunroof, a cargo net, plus front and rear parking sensors.

I’ve said too much already, so come back for all my experiential thoughts in an upcoming review where you’ll find out how well everything is put together, what the infotainment system is like to use, how all the premium-level features work, what it’s like to drive, and generally how is it to live with…