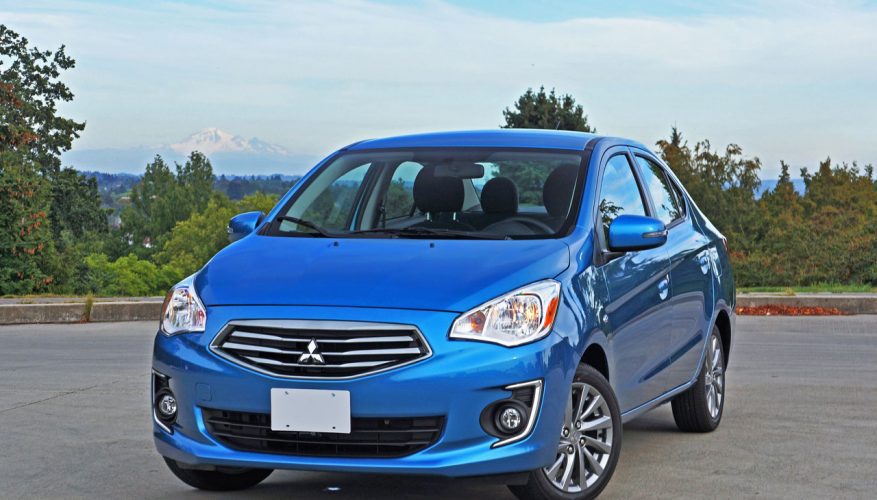 By: Trevor Hofmann
Remember when Mitsubishi had a full lineup of exciting sports models? When first arriving on the Canadian market in late 2002 for the 2003 model year I attended their all-model launch in Montebello, Quebec and was impressed by much of what they had on offer. In fact, I reviewed every single car and SUV available that year, which included compact, mid-size and full-size sedans, compact, mid-size and full-size SUVs, plus a sports coupe and convertible.

Mitsubishi continued adding models to most every mainstream market niche possible in the years that followed, and I attended nearly every launch program they put on, including the fabulous 2005 Lancer Evolution VIII MR rally-bred sport sedan that wasn’t offered in Canada, the ’06 Lancer Evolution IX (also not offered here), the ill-fated Dodge Dakota-based ’06 Raider pickup truck (at which point I was asked if they should bring it to Canada, and I recommended not as I didn’t think they’d sell enough), the much-improved ’06 Eclipse GT and subsequent Spyder, the sensational Evo X in ’08 GSR and ’09 MR trims (which was brought here), the superb 235-horsepower Lancer Ralliart “Evo-lite”, the ’09 Gallant Ralliart, the ultra-agile Endeavor mid-size SUV (that I had for over a year on a long-term test), the first ’11 RVR (in picturesque Lunenburg, Nova Scotia, no less), and so many others. Over the years Mitsubishi has produced a full slate of good looking, fun to drive (the Evo remains one of my all-time favourites), nicely featured cars, SUVs and trucks (we even tested and reviewed a JDM Triton diesel back in the day), which makes its current lineup seem strangely slim by comparison.

A quick review (it won’t take long) of the Japanese brand’s retail website will show just seven new 2017 models, although one of those is a hatchback version of the Lancer, and another this Mirage G4 with a hatch. This brings its lineup down to five, one of which is the 100-percent pure electric sub-subcompact i-MiEV hatchback, which sells in such small numbers (2 last year and zero so far this year) that it’s hardly worth mentioning. The Evo X is still shown, a 2015 model dubbed “Evolution Final Edition” which sadly reminds every sport compact fan that the once revered performance brand has lost its edge. Now its focus is inexpensive, entry-level economy cars and SUVs, with a nod to zero- emissions mobility, the latter of which would be great if enough consumers actually cared about plug-ins to make them viable, other than paying lip service.

The odd-looking mono-blob i-MiEV wasn’t updated as part of last year’s brand-wide freshening, a rather unusual tact that saw all of its aging models, every one of which should have long received complete redesigns, dressed up with fancy new chrome-laden front fascias so as to at least appear new. Some interior improvements, like updated infotainment and new upholstery, joined the mid-cycle updates, but the changes fall into the “too little too late” category, and to my eyes the trademark grille design went from attractive yet old, to old and ugly, like too much plastic surgery on an already stretched and creased face (on the positive, the upcoming Eclipse Cross looks promising).

The Mirage was never pretty, but that’s not really what it’s about. It’s about cheap transportation, and to that end it meets its objective nicely. Here in Canada these are rather rare sightings, especially in four-door G4 trim, but at my second home in Manila, Philippines they’re everywhere. My (almost) brother in law drives a Mirage hatch, and it’s considered a respectable ride that up and coming professionals might consider (he’s a bank manager), while the rich will drive around in Mitsubishi Montero Sports (it’s pretty awesome, and a much better use of the brand’s new design language than anything sold here).

The Montero Sport is the most recently redesigned member of Mitsubishi Motors Philippines Corporation, and while very nice for that market its interior wouldn’t pass muster here. Without offending any of my Filipino family and friends, they don’t expect as much from their cars as we do (the full-size Montero sold here 15 years ago is much the same as the version still sold as the new Pajero there), hence why the now five-year old sixth-generation Mirage sells so well there and struggles for traction in the Canadian market.

Cars don’t come much more basic than the Mirage, although at least in the Mitsu you’re not forced to roll up your own windows. You’ll need to go way back to the DIY automotive era if you buy a base Micra, but you’ll get where you’re going quicker thanks to a 109-horsepower DOHC four-cylinder compared to the Mirage’s 78-horsepower 1.2-litre DOHC three-cylinder. The Micra is a whole lot more fun to drive, but then again it’s a lot more fun than the larger Nissan Versa Note too, and the Sentra (non-turbo sans manual), Altima, and dare I say Maxima too (what can I say, I’m a Micra fan). Still, for those looking to optimize fuel economy the base Mirage’s 6.4 L/100km combined city/highway fuel economy rating is better, as is its industry-best 10-year, 160,000 km powertrain warranty (the Spark’s warranty is only 5 years, but it spans 160,000 km too, while its more powerful engine is rated slightly better at 6.2 L/100km).

To be nice, the Mirage focuses more on comfort than sport, especially this new four-door G4 model. I’ll leave you to decide about styling. Some will like its generous use of chrome for the grille, fog lamp bezels, minuscule side fender vents (what are those anyway?), and trunk lid appliqué, and its appropriately named Sapphire Blue paintwork is very nice, while the interior supplies as much black lacquered trim (a Japanese tradition that’s been adopted by every brand from Kia to Roll-Royce) as the exterior boasts metal brightwork. Most should agree the cabin is pleasantly designed and quite comfortable, while the black and grey striped seat upholstery is very nice.

I know I said I’d leave styling alone, as you certainly don’t need me telling you if something looks good or not (design is a personal thing), but suffice to say it excites my eyes as much as the three-banger ignites my Evo X aspirations, but I must admit this model’s 6.9 L/100km city and 5.7 highway fuel economy put a smile on my face.

That’s with the optional continuously variable transmission (CVT), the base G4 model with its five-speed manual gearbox not quite as thrifty as noted earlier. The CVT comes standard in $18,298 G4 SEL trim (less a $1,700 Monthly Offer at the time of writing), lesser models including the $14,498 G4 ES 5MT (with no advertised discount) and the $15,698 G4 ES CVT (ditto the no-haggle $1,700 off deal). Of note, you may also qualify for an additional $500 rebate under Mitsubishi’s “Education Edge” program if you’re a recent university grad, plus the same $500 deal goes to qualified military personnel, first responders, those with mobility challenges (with the money going towards mobility equipment conversions), and loyal repeat customers.

As noted earlier, the Mirage was built for comfort (and in Thailand, incidentally), while it’s also built for peace of mind thanks to that 10-year comprehensive and 160,000 km powertrain warranty I mentioned earlier (it’s worth repeating). That is a comforting thought when the little three-cylinder engine is buzzing along at highway speeds, something it does well enough if not quietly, not helped by a continuously variable transmission (CVT) that adds a considerable droning effect to the soundtrack of tire noise and rushing air. Such is life in most subcompact city cars, the term “city” car used for a reason. Nevertheless the singular-gear CVT builds up speed smoothly and the car feels stable on the highway, is acceptable through the corners if not pushed too hard, and as noted is reasonably comfortable.

Likewise visibility is good in traffic, where its engine note is less noticeable. Truly, around town this little runabout is pretty decent transportation, especially with audio system playing tunes via aforementioned Bluetooth streaming. I think you’ll be impressed will all the previously noted features and how nicely everything works, its display radio quite good for the class.

As for convenience, the trunk is well proportioned for a subcompact city car at 348 litres (12.3 cubic feet), while it offers a lot better security for your belongings than the more accommodating 487-litre (17.2 cubic-foot) hatch. If you want to expand the trunk for longer items you’re out of luck, as the rear seatback won’t fold flat like the 60/40-split Mirage hatchback. I suppose the silver lining is even better security.

Nevertheless, if you’re looking for a simple, straightforward commuter car that’s great on fuel, reasonably comfortable, backed by an incredibly good warranty, and filled up with plenty of kit in top-line G4 SEL trim, it’ll do the job and then some.
©(Copyright Canadian Auto Press)
Car Shopping Tools