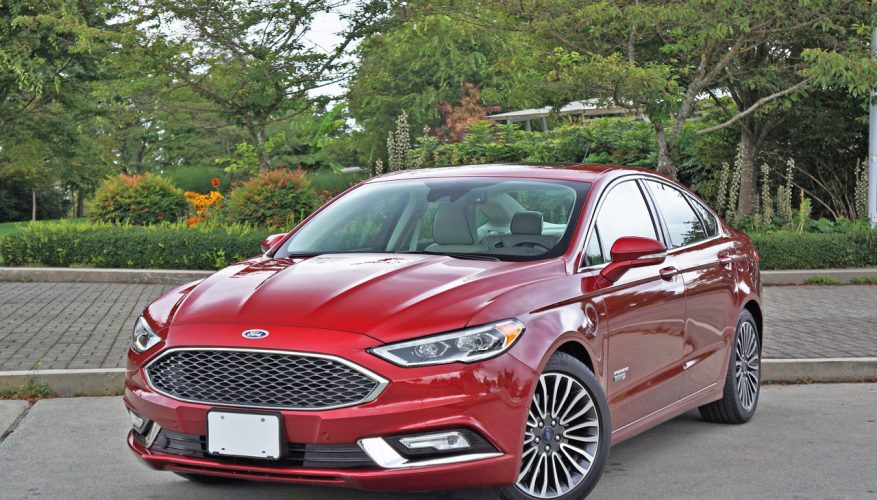 By: Trevor Hofmann
We certainly have a lot of engine alternatives these days. While oil burners are becoming less prevalent amongst cars due to Volkswagen’s Dieselgate scandal, various types of hybrid and full electrics are available from most manufacturers.

“Energi” is Ford-speak for plug-in hybrid or PHEV, a technology that straddles the middle ground between an HEV (Hybrid Electric Vehicle) and EV (Electric Vehicle) by providing pure electric capability for short commutes as well as the ability to continue driving without recharging at all, a best of both worlds scenario that seems to have found common ground amongst environmentally conscious buyers.

The Fusion Energi was one of the earlier plug-in adopters, arriving on the scene in February of 2013. It was by no means first in North America, Chevy’s Volt starting things off on a mass scale in 2010, which beat Fisker’s Karma and a small run of Ram 1500 PHEVs to market by a year or so. Toyota’s Prius Plug-in Hybrid arrived in early 2012, followed by a tiny run of 25 Chrysler Town and Country E85 flexible-fuel plug-in minivans, while the year finished off with the Nissan Leaf in September (I mention it only out of respect to the world’s bestselling EV), Ford’s Focus-based C-Max Energi in October, and Volvo’s V60 Plug-in Hybrid (the world’s first plug-in diesel) just after that. Honda’s Accord Plug-in Hybrid arrived in February of 2013, but only in the U.S., while the very same month saw the first Ford Fusion Energi PHEVs arrive in Canada as well.

Should I stop there? Probably a good idea, as the market is now filled with PHEVs from Mitsubishi, McLaren, Porsche, BMW, Audi, VW, Mercedes-Benz, Hyundai, Ferrari, Kia, Chrysler (for real this time), Acura, and Cadillac, plus a range of new gasoline-electric PHEVs from Volvo. In other words, if an automaker isn’t producing a plug-in they’re really out of the loop.

Ford doesn’t publish its Fusion Energi sales numbers, but rather includes them, along with deliveries of the non-plug-in Fusion Hybrid, within its total Fusion sales. Therefore it’s difficult to tell just how popular it is amongst PHEV buyers, but considering how popular the Fusion is on the whole it only makes sense the Energi gets its fair share. Fusion ranked second most popular in Canada’s mid-size sedan class last year, just behind the Toyota Camry and ahead of the Honda Accord. In the U.S. it’s fourth in line, oddly enough, beaten by the two aforementioned Japanese as well as the Nissan Altima. From what I can gather, the Volt (family) is number one globally, followed by the Mitsubishi Outlander PHEV, the Prius PHV, BYD Qin (a Chinese-market sedan backed by the one-and-only Warren Buffett), BMW i3 (the optional REx is almost a PHEV), and BYD Tang crossover wagon (this car having bumped the Fusion Energi off the top-10 list for the first time last year). So it’s safe to say the Fusion Energi is top-10 here in North America, although one of those BYD models is reportedly U.S. EPA certified, so it’s probably coming sooner than later.

PHEVs and EVs operate in a brave new automotive world, with upstarts like the previously mentioned Fisker (now defunct, but kind of back again as non-PHEV Karma-it may come back to haunt them), Tesla (the highest valued carmaker to never turn a profit), BYD, and a number of other global manufacturers that might’ve never had the opportunity to ply for attention if it weren’t for appealing to a new type of anti-car enthusiast.

Anti-car is probably the wrong term, they’re more anti-emissions (or at least anti-tailpipe emissions), and I must admit to being all for that. I remember the smog over 1970s LA before unleaded gasoline, and at the opposite end of the overpopulated spectrum I’ve enjoyed breathing clean air while sitting in 20-million-plus Sao Paulo’s infamous rush hour traffic (they mostly burn Ethanol), so we’ve come a long way in some of the world’s largest cities. On the other hand, after three days in my home-away-from-home Manila, Philippines, my eyes are burning from some of the worst air pollution anywhere (the city is filled with two-stroke “tricycles” and non-regulated diesel-powered everything).

There’s nowhere to plug in a PHEV in Manila, other than at home and a single residence-supplied charging station off Luzon Avenue in Quezon City, according to Plugshare.com. That’s a fair drive from my property in Antipolo (this elevated locale chosen to get up into cleaner air), but back in Greater Vancouver there seems to be a free quick charging station around every other corner. A similar scenario plays out in many two million-plus North American cities, so therefore the Fusion Energi can make a lot of sense on this side of the Pacific.

Despite relative ease of charging, only Hyundai’s Sonata and Kia’s Optima joins the Fusion Energi in offering plug-in hybrid technology to the popular mid-size sedan segment, this allowing owners to recharge a larger battery capable of driving longer distances on 100-percent electric power, not to mention at higher speeds than conventional hybrids can do in EV mode. While the Fusion Energi is only good for about 30 kilometers of pure EV propulsion before its 2.0-litre four-cylinder gasoline engine joins in for assistance and regular hybrid usage ensues, a full charge can be achieved in just 2.5 hours which makes it possible for commuters to recharge at work or those who use their cars throughout the day, for business or running personal errands, to recharge their cars at shopping malls or other facilities that offer fast charging stations.

Zipping through busy traffic is easy thanks to plenty of power, but not solely from the Energi’s internal combustion engine (ICE) that makes just 141 horsepower and 129 lb-ft of torque alone. When combined with its electrical assistant, output bumps to 188 horsepower. Ford doesn’t provide total torque as it’s a difficult figure to estimate, but strong performance off the line has caused EV experts to estimate it between 180 and 190 lb-ft.

The Fusion Energi drives the front wheels via a continuously variable transmission (CVT), par for the course amongst hybrid drivetrains, while fuel economy is estimated to be 5.8 L/100km in the city and 6.5 on the highway when in regular hybrid mode, or 2.7 Le/100km when factoring in regular usage of its EV mode. Of course, if you’re easy on the go-pedal and don’t have far to commute you can potentially run on EV-power most of the time, reducing that 2.7 Le/100km rating substantially. I drove for a week and only needed to add $6.50 to the tank at $1.32 per litre, which is certainly thrifty. Normally a week’s gas will set me back about $35 to $40 per car (I test two to three at a time), so the savings are big, while I tend to drive plug-in models more than average when in my care as I want to save money at the pump just as much as the next guy.

I also really liked the car. Visual changes to the entire Fusion line are subtle but effective, the grille now appearing less Aston Martin-like and therefore more acceptable to those of us who’d rather not see a favourite sports car brand paid such a degree of honorary tribute by a mainstream volume automaker, while the headlamp clusters are scalloped slightly on their lower edges, a new more horizontal lower fascia provides a cleaner yet sportier look, redesigned taillights that now feature a chromed strikethrough stretch across the trailing edge of the deck lid to visually connect the two for a classier appearance, and other small details modernize the popular mid-size sedan. All in all it’s an effective mid-cycle makeover.

This combined with Ford’s usual top-tier switchgear and superb electronic interfaces, the latter including the model’s impressive dual-display colour TFT gauge cluster, the rightmost screen animated with a creative graphic array of growing and falling leaves, which is a gentle but effective eco driving reminder. The centre stack is topped off with Ford’s superb new Sync 3 infotainment system, featuring fashionable light blue and white graphics organized in a minimalist design that seems to pay homage to all things Apple (although possibly even better than the latest iPad due to a simpler, clearer approach to design). I like it a lot, and appreciate its easy connectivity to either Apple CarPlay or Android Auto enabled smartphones.

The Fusion has long been lauded before for its large, commodious interior, with ample room for all body types front to back. The Platinum’s 10-way powered front seats with two-way driver’s memory are especially comfortable too, while those in the rear offer even more room to stretch out plus excellent lower back support in the sculpted outboard positions.

Ford isn’t the first to incorporate a rotating dial for selecting gears, but the Fusion’s gloss black topped, knurled metal sided controller is one part space-saving efficiency and two parts automotive jewelry; it’s really sweet. The top centre remains stationary with the PRND increments lighting up as you spin the outer rim around; the central L button doing likewise when pressed. It brings a real sense of occasion to what could otherwise be a regular mid-size family sedan, albeit a particularly nicely finished one.

With “D” selected the Fusion moves forward in Gattaca-like silence, providing my very own Vincent Freeman whisks off to meet up with Irene Cassini moment. Uma Thurman sci-fi fantasies aside, it really feels like you’re living in the future despite the classic luxury touches everywhere. When power is needed it comes on quickly, seamlessly, and still silently other than road and wind noise, which are thankfully kept to a minimum due to extensive sound deadening and active noise cancellation. After the battery is depleted, which will occur faster than advertised if your right foot stays pegged to the floorboard or when cruising at highway speeds, the ICE comes to life and adds power without commotion while also recharging the battery. At this point it’s little more efficient than a regular Fusion Hybrid, but let’s not forget the non-PHEV version is still very stingy with a tank of fuel.

The only Fusion Energi limitation is an extremely small trunk, the large motive battery filling the bulkhead behind the rear seatbacks as well as much of the once large cargo area, resulting in just 232 litres (8.2 cu ft) compared to the regular Fusion Hybrid’s 340 litres (12 cu ft) and conventionally powered Fusion’s 453-litre (16 cu-ft) trunk. For many this issue will be an immediate deal-killer. You won’t likely be choosing the Fusion Energi to shuttle you and a few friends for golf, unless you keep your clubs at the course. Ditto for picking up relatives at the airport. For commuting, tooling around town and running errands, plus most other purely passenger-focused activities, it’s ideal, but once again you’ll be hard-pressed to fit an average size hockey bag into the trunk so forget about dropping Ethan or Emma off at the ice rink on your way to work.

Then again there’s a very narrow pass-through if you pulled the 60/40-split seatbacks down, and before you start laughing just appreciate it would allow multiple skis to be stuffed through if needed. It’s also important to remember some other plug-ins offer no such trunk extension and therefore no possibility of doing likewise, so kudos to Ford for adding a bit of passenger/cargo flexibility.

I suppose if you want more cargo room the SUV/MPV-like C-Max Energi is more than capable of providing, Ford being one of few brands to offer up two totally unique plug-in hybrids, not to mention a fully electric Focus BEV.

If a mid-size sedan is more your style, get ready to be impressed with the Fusion Energi Platinum. It gets uncomfortably close to Lincoln levels of luxury, but does so at a price that’s considerably more agreeable. That you can still get a reasonable discount from Ford (if you ask nicely), plus a sizeable rebate from the BC (up to $2,500), Ontario (up to $7,730) and Quebec ($4,000) provincial governments, choosing the Fusion Energi should be an easier decision for many.
©(Copyright Canadian Auto Press)
Car Shopping Tools