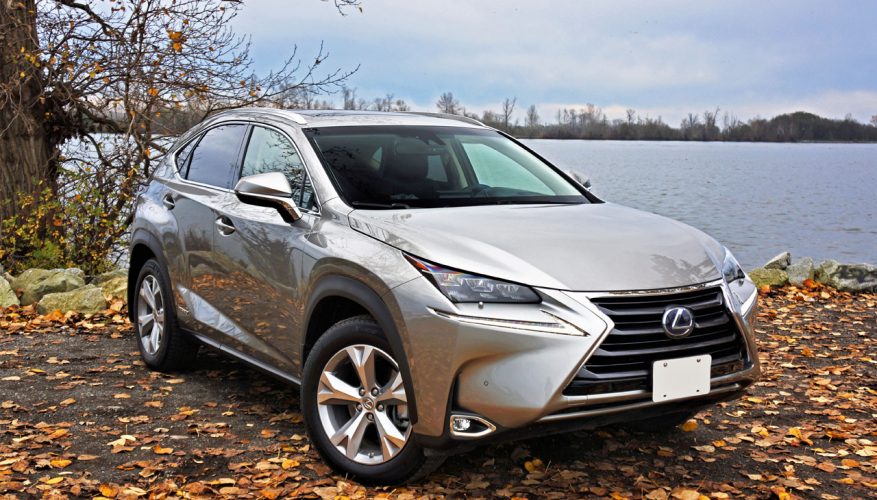 Amazingly, Lexus went from having nothing in the compact luxury SUV segment throughout most of 2014 to being one of the top-three players by the end of 2016. The story is even better in the U.S. where the new NX is now number one in the entire class.

How the mighty Germans have fallen, not that Lexus is particularly weak and feeble. The Japanese luxury brand is a powerhouse in the crossover sport utility sector where its RX has been the bestselling mid-size luxury SUV in both Canada and the U.S. (by a long shot) for as long as there’s been a mid-size luxury SUV segment, a vehicle class it helped to create. Therefore it only makes sense the NX would do well too.

It helps that it looks fabulous, or at least I like it a lot. The NX’ design hasn’t changed one iota since arriving in December of 2014 as a 2015 model. Lexus didn’t wait long before getting this hybrid variant to market either, joining it up with the NX 200t for the model’s inaugural year and making it an important part of its one, two knockout NX punch ever since.

Now that the Audi Q5 Hybrid is history, the NX 300h is an anomaly within the compact luxury SUV category. In fact, with Audi also eliminating the Q5 TDI (at least temporarily) and Mercedes-Benz doing likewise with its new GLC (again, just for the time being as far as we know), the only alternative-fuel competitors in the class are BMW’s X3 xDrive28d and the unlikely addition of Jaguar’s F-Pace 20d. Still, being that Dieselgate ruined Rudolf Christian Karl’s most fuel-efficient internal combustion engine (ICE) type, most environmentally oriented consumers won’t be turning to diesel as a way to save the planet, leaving the NX 300h as the only real green choice in this burgeoning market segment.

Behind the NX 300h’s bold spindle grille is the same ultra-clean powertrain as the new Toyota RAV4 Hybrid and Lexus’ ES 300h, comprised of a 150 horsepower gasoline-fueled 2.5-litre four-cylinder Atkinson Cycle ICE with 152 lb-ft of torque driving the front wheels and a 50 kW (67 horsepower) permanent magnet electric motor powering the axle in back, the energy for the latter sourced from a rear-mounted nickel-metal hydride battery that gets recharged via the ICE as well as regenerative braking.

When topped off it has the ability to drive solely on EV power for short distances at low speeds (bumper-to-bumper traffic, parking lots, etcetera), but most of the time it merely assists the ICE for improved performance and reduced fuel consumption. A specially designed continuously variable transmission (CVT) takes care of shifting duties, of sorts, the full result of Lexus Synergy Drive’s combined forces being 194 net horsepower and the same 152 pound-feet of claimed torque (although it feels like a lot more and likely is).

More importantly the NX 300h is good for estimated fuel economy equaling 7.1 L/100km in the city, 7.7 on the highway, and 7.4 combined, which is far and away the best in its class (the X3 and F-Pace diesels achieve 7.9 and 8.1 combined city/highway respectively).

Along with its EV mode, the NX 300h features three selectable drive modes including Eco, Standard, and Sport, these focused on maximizing efficiency or power rather than changing steering and suspension settings.

This being a niche model in comparison to the NX 200t, Lexus’ Canadian division limits trims to just one and options packages to a singular digit as well. Standard trim, which starts at $54,350, is therefore generously equipped with 18-inch alloys on 225/60R18 all-seasons, LED low-beam headlights with washers, LED DRLs, LED clearance lamps, LED fog lights, LED taillights, aluminum roof rails, a rear rooftop spoiler, auto-dimming power-adjustable heated side mirrors with integrated turn signals and memory, proximity access, and more on the outside.

Where the conventionally powered NX 200t can be had with the sportier F Sport package, the NX 300h makes do with less aggressive styling and more comfort-oriented suspension settings, although you can upgrade the wheels to a unique set of 19-inch F Sport alloys via the accessories catalog for $2,650 and change.

As you may have noticed I haven’t told you diddly squat about my experience behind the wheel, what I think about its overall refinement, or its standard and available feature set, overall roominess, pricing and value proposition, etcetera, etcetera, which means you’ll need to come back for my detailed road test review. Make sure you do, as you may just be surprised at what I have to say…